A draft law on preventing attacks against Tunisia's police forces has raised red flags, with some arguing it would undermine human rights and allow police to operate with impunity. 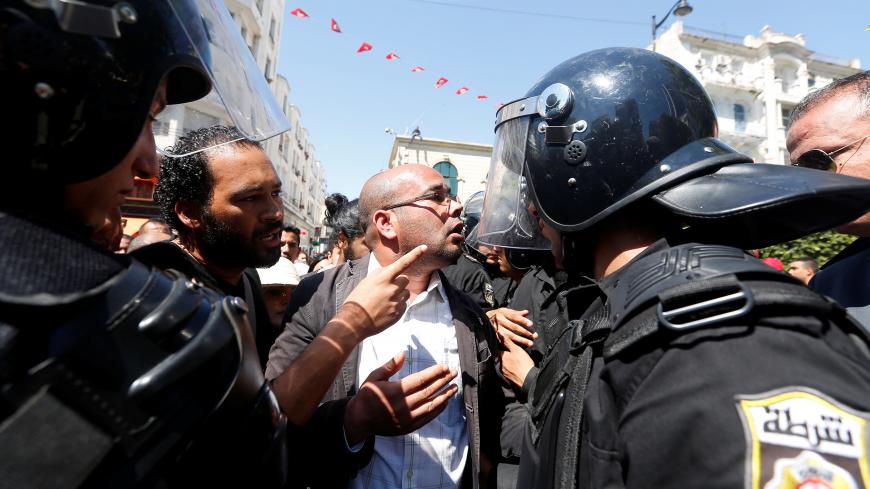 Law students clash with riot police officers during a demonstration against the government in Tunis, Tunisia, April 14, 2017. - REUTERS/Zoubeir Souissi

Tunisia's parliament has resurrected a long-buried draft bill addressing police protection that once again is raising fears that the country will return to a "police state." The proposal is designed to prevent attacks on and abuse of police and customs officials and, ostensibly, guarantee the stability of society at large.

During a Nov. 15 parliament session, Interior Minister Lutfi Ibrahim called for the formation of a joint committee with representatives of the Defense, Justice and Interior ministries and the Committee on General Legislation to consider an amended edition of the draft law. He said, “The draft law will not be withdrawn from the House of Representatives.”

Speaker Mohamed al-Nasser said the draft law would be referred to a committee that would meet with civil society organizations to look into their proposals. He said, “It is our duty to protect security men, but it is also our duty to protect human rights and respect the 2017 constitution.”

The secularist Nidaa Tunis party, which holds the parliamentary majority, supports the draft law. But otherwise, the 2-year-old proposal is raising a storm of controversy, as some voices are calling for its complete withdrawal while others would settle for amendments.

Its most recent revival came after an extremist stabbed two security personnel Nov. 1 near the parliament in Tunis; one of them later died of his injuries. Security unions have threatened to withhold protection of parliament members unless the legislators pass the draft bill. This followed an incident in June when a policeman died after being injured during tribal clashes. His death spurred hundreds of police to protest outside parliament in July and demand that the draft be passed.

But in a joint statement issued July 14, 11 nongovernmental organizations announced their categorical rejection of the draft, as they considered the mere proposal of it “an act of hostility targeting freedom of expression and demonstration.” They called for its immediate withdrawal. Many political parties and professional organizations, and even some security unions, reject the proposal, insisting that it aims at causing dissension between citizens and security agents.

Opponents also say the bill won't protect police from violence — although it could help lessen their liability when using force against civilians. The proposal is being met with the same objections that put it to bed two years ago — that it would allow police to use force without discretion and endanger freedom of expression and the press.

Fada al-Hamami, a Tunisian affairs researcher at Amnesty North Africa, told Al-Monitor that the draft law “legislates impunity” and might be used to justify “uncalled-for deadly force.” She insists the legislation would be “a fresh blow to the freedoms of demonstration, organization and expression.”

Hamami considers the draft law a “dangerous step toward institutionalizing impunity, even in cases when the lives of others are not endangered,” which, according to Hamami, “violates the provisions of international law” and the constitution. “The articles of the draft law include vague provisions that could criminalize legitimate criticism of security forces, including the criticism of practices that violate human rights," and place security forces "above the law.”

According to Hamami, the proposal also includes “a very vague definition that could be exploited to imprison whistleblowers on human rights abuses" and includes nothing to protect them or journalists.

One article of the draft law criminalizes “denigration of police and other security forces with the aim of harming public order,” which would be punishable by two years in prison and a maximum fine of 10,000 dinars (roughly $4,000).

The proposal also states that anyone who discloses or publishes “national security-related secrets” could spend 10 years in prison and pay a fine of 50,000 dinars. Such “secrets” are broadly defined as “any information, statistical data or documents pertaining to national security.”

“The legal chapters of this draft law are illogical,” Ameen Ghazi, a rights activist and director of Al-Bawsala, a nonprofit organization in charge of monitoring parliament’s work, told Al-Monitor. Ghazi said the draft law is a blow to the freedoms of demonstration, organization and expression and “does not suit a country going through a democratic transition.”

Issam Dardouri, the head of the Tunisian Organization for Security and Citizens, told Al-Monitor, “[Police] protection will never come through such law, but rather through providing them with equipment," insurance coverage and compensation.

The draft "neither helps security personnel nor contributes to their protection, as much as it is a mere tool that helps certain political agendas to rule," he said.

Political activist and Popular Front parliament member Ammar Amroussia told Al-Monitor, “The draft law aims at violating the constitution, undermining democratic transition and safeguarding the return of a dictatorship and a police state in Tunisia.” Amroussia called upon parliament to withdraw the draft law without discussing it further.

Zouhair Maghzaoui, the secretary-general of the People’s Movement political party, told Al-Monitor, “According to such law, it is not possible to hold accountable any forces carrying weapons. This law [also] discriminates among employees themselves, as it divides them into security employees who carry arms — and those are protected under the law — while employees who do not carry weapons do not enjoy the same privilege.”

Mohamed Abbou, an opposition politician and founder of the Democratic Current Party, told Al-Monitor, “The draft law brings to mind the arsenal of laws that established dictatorship before the revolution, as it raises fears of wiping out the achieved gains of freedom.”

In a statement to Radio Nationale on Nov. 9, Naji al-Baghouri, the head of the National Syndicate of Tunisian Journalists, insisted that it is necessary to withdraw the bill as it would violate journalistic freedoms because it allows for prison sentences for those who purposefully disclose secrets of national security without even specifying what those secrets might be.

However, during a parliamentary hearing in July, Minister of Defense Farhat Horchani said that despite what the draft bill's opponents say, it is designed to protect human rights. He claimed it would have “no negative impact whatsoever on the human rights system” as “there will be safeguards and restrictions to protect freedoms.”