Manbij residents face off against SDF over conscription policy

Residents of Manbij are pushing back against the Syrian Democratic Forces after they imposed a conscription policy on the Syrian city and arrested protesters. 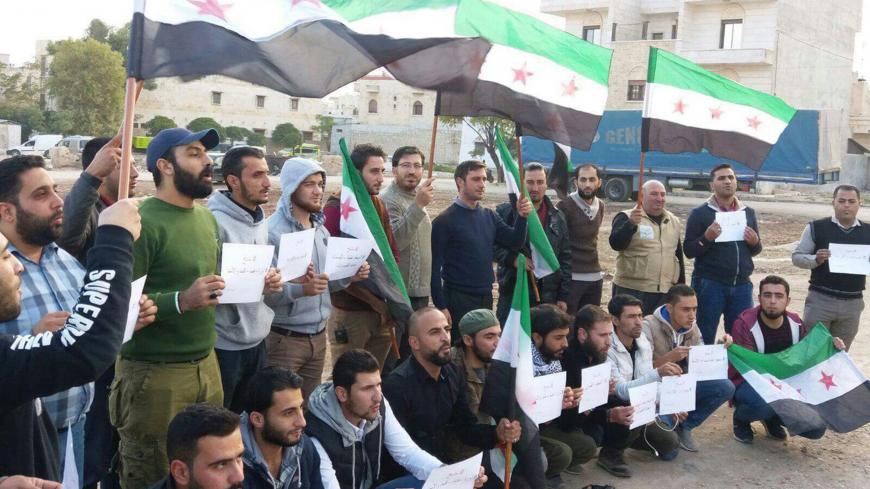 ALEPPO, Syria — Activists in the city of Manbij in Aleppo’s eastern countryside, which is under the control of the US-backed Syrian Democratic Forces (SDF), are demanding the SDF to release 15 people who organized a strike in the city Nov. 5. The strike came in protest against a new law on forced conscription issued by the SDF’s legislative council Nov. 2.

Human rights activist Abu Mohammed (pseudonym) told Al-Monitor, “Dozens of Manbij residents who were arrested the day following the strike have been released. But 15 of those who organized the strike remain in prison. As activists in the city of Manbij, we are demanding their immediate release from the SDF.”

Several demonstrations were staged before the strike in the city of Manbij and the surrounding areas, as demonstrators threatened to escalate their protests in the event their demands were not met.

Abu Usama, a resident of Manbij and one of the participants in the strike, told Al-Monitor, “No one can impose on us something we do not want to do. We — the Manbij residents — previously staged a strike against the Syrian regime in Manbij and the Islamic State [IS] when it was controlling Manbij, and now we are on strike against the SDF because of a decision that will force the people of Manbij to fight in the ranks of the SDF. The SDF is also fighting the FSA, and many of our sons, relatives and acquaintances are fighting in the ranks of the FSA. We will not agree to point our weapons at people who essentially want to defend and liberate the Syrian people from the brunt of the regime’s slavery. We have shed blood for the sake of freedom and dignity, and we have no intention of going a single step back.”

Meanwhile, the city of Manbij witnessed Nov. 6 a large-scale arrest campaign carried out by the SDF against about 100 people in the age range of 18-30 as several military checkpoints were erected by the SDF at the entrances and exits of the city.

Abu Mohammed said, “On the second day of the strike, the SDF forced shop owners to open their shops and even broke several locks. This led residents to leave their houses out of fear. But dozens of Manbij residents were arrested at SDF checkpoints, which created a huge congestion in Manbij.”

He added, “There were calls for civil disobedience in Manbij because of the campaign of arrests carried out by the SDF, but a large number of the detainees were released at the end of that day, while the 15 people who organized the protests remain in prison to date."

The SDF issued a statement Nov. 6 in which it announced the suspension of the decision to impose compulsory conscription on the people of Manbij and called instead on the residents to voluntarily join “the self-defense army” in Manbij and its countryside as a means of protection against IS cells and Syrian regime advocates.

Despite the SDF decision to abolish the conscription law, the Manbij residents continue to distrust the SDF.

“The SDF has indeed abolished the law of conscription, but the Manbij residents still have concerns in this regard. Those who organized the protests are still detained, and the people can no longer trust the decisions issued by the SDF. We hope that the decision to abolish forced conscription was a genuine decision, not one issued based on popular pressure,” Abu Mohammed said.