Five Palestinian designers are nearing the end of a creative project in which they designed and created outfits out of recycled materials from the community. 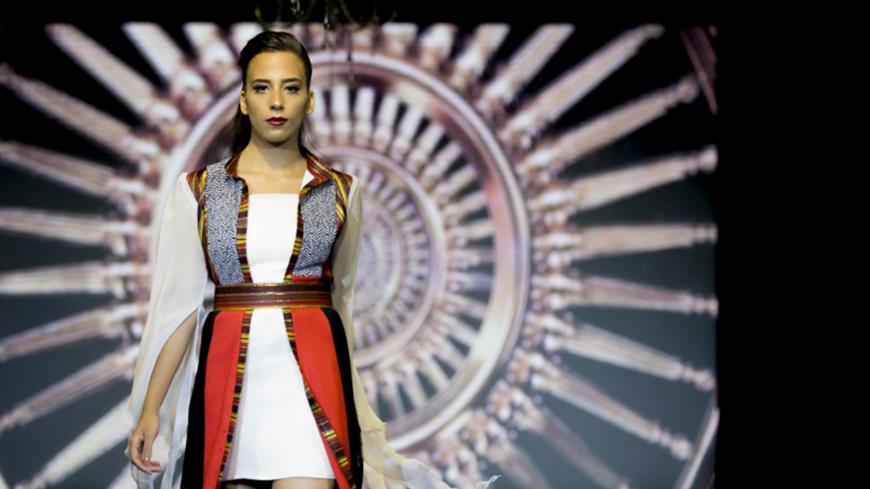 One of the costumes created by Palestinian designer Maha Shaltaf appears in the Recycled Project's fashion show in Ramallah, Nov. 5, 2017. - A M Qattam Foundation

Using old clothes, newspapers and other recycled material, five Palestinian designers help put on a fashion show in Ramallah Nov. 5. Their 30 outfits on display were created as part of a recycling project sponsored by the A.M. Qattan Foundation (AMQF).

Rami Kashou, a New York-based Palestinian fashion designer who oversaw the creation of the costumes and mentored the Palestinian designers, told Al-Monitor that the London-registered AMQF project included a workshop, a fashion show and a design contest. The aim was to create public awareness of the importance of recycling as well as to help promote design in Ramallah.

“When the project was launched in May, we studied and analyzed the style of traditional costumes by taking advantage of the permanent heritage exhibition at Inaash Association and by visiting the Museum of Palestine to examine artistic patterns and draw inspiration for our designs. Each designer had to create six outfits in a month,” said Kashou.

Simultaneously, the foundation called on the public and local companies to donate waste materials such as newspapers, cardboard and plastic for the designers to use.

One costume from each designer was placed in the window of a shop in downtown Ramallah in October to see how shoppers would react to the recycled designs. Then each designer produced five more costumes including evening dress and day wear for the fashion show. The final stage of the project, selecting the winner from among the five designers, is yet to come.

Kashou said most of the donations from citizens and local companies were juice boxes and old wrapping paper, but the local community simply becoming involved in the recycling process was one of the goals of the foundation.

One of the contestants, 40-year-old Youssef Alliwi from Nablus, studied fashion design in Amman. He found few employment opportunities in the West Bank and so decided to open his own fashion business in Nablus.

Alliwi designed a modern blouse and skirt from old jeans and leather pants. He told Al-Monitor that participating in this contest was a new experience for him, since he had to create the outfit out of nontraditional materials that challenged his creativity.

In addition to the contest’s environmental goals, it created an opportunity for designers to work with a world-famous designer and showcase their creations. It was a great opportunity for Maha Shaltaf from Ramallah, a designer who has been creating outfits from her home for 25 years now.

Shaltaf told Al-Monitor that she already recycles old clothes to make new ones at home, but using cardboards and plastic was new to her. She normally reuses embroidered pieces to create modern designs, which she sells to her acquaintances.

Project coordinator Fares told Al-Monitor that both Shaltaf and Alliwi's designs naturally fell in line with the recycling project, which AMQF plans to organize on an annual basis. The foundation will open its headquarters in an environmentally friendly building in Ramallah next year.

Fares told Al-Monitor, “Our challenge this year was to design outfits from recycled materials. In the coming years, we will target the furniture industry.”