Israel decided not to return the bodies of Palestinian Islamic Jihad and Hamas members until some progress is made on returning the Israeli civilians and the bodies of IDF soldiers held by Hamas. 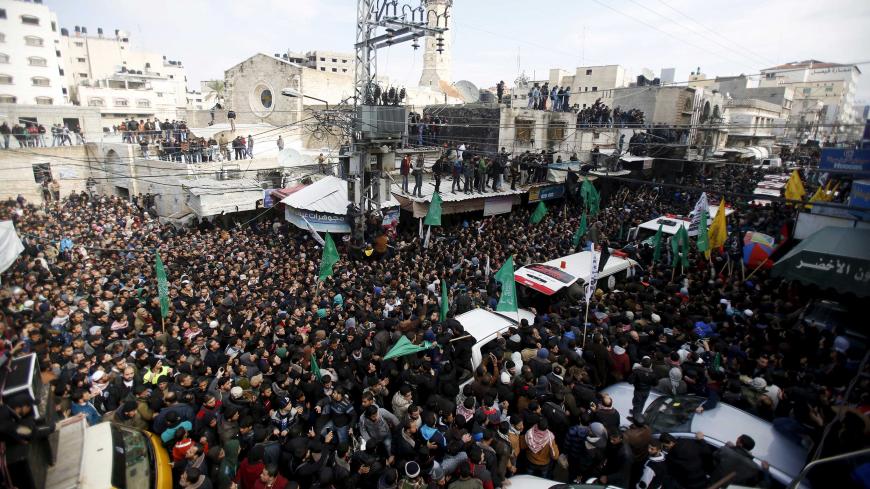 Mourners gather around ambulances carrying the bodies of seven Palestinian Hamas members who were killed when a tunnel collapsed close to the Gaza Strip's eastern border with Israel, during their funeral in Gaza City, Gaza, Jan. 29, 2016. - REUTERS/Suhaib Salem

Two human rights groups, Israel's Adalah (Justice in Arabic) and Al Mezan Center for Human Rights in the Gaza Strip, withdrew their petition to the Supreme Court Nov. 6 that demanded Israel allow Hamas forces to extricate five missing Palestinians from a tunnel extending from the southern Gaza Strip, which the Israel Defense Forces (IDF) blew up last week. The decision came following an announcement from Israel that it has the bodies of the five Palestinians, who were considered missing until then.

The petition — also on behalf of the father of one of the missing Palestinians, Hassan Abd al-Jalil Sabah — was submitted to the Supreme Court Nov. 2. The impetus was a decision by the Coordinator of Government Activities in the Territories Maj. Gen. Yoav Mordechai to turn down a request by the Red Cross to allow Hamas to send rescue teams to the tunnel in order to locate any trapped Palestinians and provide any who are still alive with medical aid. "Israel would not allow search efforts in the Gaza Strip security zone without progress on the issue of Israeli POWs [prisoners of war] and MIAs [those missing in action]," Mordechai told Jacques de Maio, the head of the International Committee of the Red Cross's delegation in Israel.

According to Adalah and Al Mezan, Mordechai's refusal was a clear violation of international law concerning the humanitarian rescue of the injured, including those injured in war.

Until the Red Cross approached Mordechai and Adalah and Al Mezan took their case to the Supreme Court, it was not known whether the Palestinians in the tunnel were killed immediately when Israel blew it up or whether they were still alive and could be offered medical aid and rescued. According to Adalah's lawyer Muna Haddad, Israel was in no hurry to respond to the case, because it was concerned that the Supreme Court would obligate it to rescue the missing Palestinians in the tunnel, "as required by the humanitarian rules of international law." Adalah believes that the IDF first searched for the bodies in the tunnel and only responded to the Supreme Court case after they were found.

Ever since Operation Protective Edge in 2014, Hamas has been holding the bodies of two IDF soldiers, Oron Shaul and Hadar Goldin. After extensive investigations, both were declared dead by the IDF, so as to deny Hamas the opportunity to abuse their families by claiming that it held two living soldiers.

Hamas also holds two Israeli civilians, Avera Mengistu and Hisham al-Sayed, who crossed the border into Gaza of their own volition and are described as suffering from serious emotional illnesses. In a May 2 report by Human Rights Watch, director of the group's Middle East and North Africa division Sarah Leah Whitson claims that "Hamas refuses to confirm its apparent prolonged detention of men with mental health conditions and no connection to the hostilities is cruel and indefensible. … No grievance of objective can justify holding people incommunicado and battering over their fate."

Ever since the summer of 2014, Israel has engaged in indirect negotiations with Hamas by exchanging messages with the organization. Over the years, Egypt has tried to mediate between the two parties, as have former British Prime Minister Tony Blair and representatives of the European Union. In exchange for information or an agreement to return the bodies of the soldiers and release the civilians that it holds, Hamas is demanding the release of all its prisoners from Israeli jails.

Yahya Sinwar, the current leader of Hamas in the Gaza Strip, held the Palestinian prisoners portfolio before he was elected to his current position. In August, he told journalists in Gaza that the group has preconditions before it reaches any deal with Israel. "We have bargaining chips in the case of the prisoners, which puts us on stable ground. We have a commitment to all the prisoners and promise them that we will win their release in respectable deals."

Given all this, Sinwar and the rest of the Hamas leadership left Israel with no choice but to play by the rules of the game as they — Hamas members — laid them out, and that this can be described as nothing less than "trading in bodies." Israel is faced with a difficult dilemma: Should it act like a state that follows international law, or should it play by the rules set by Hamas in order to get back the bodies of its soldiers now held by Hamas, so that they can be brought to burial in Israel, and win the release of its citizens suffering from emotional disorders?

One Israeli security source told Al-Monitor on condition of anonymity that no one in Israel ever considered allowing Hamas to enter the tunnel dug from Gaza to Israeli territory in order to extricate the dead and trapped Palestinians, who were engaging in an act of aggression against Israel. This is especially true since the group has held the corpses of Israeli soldiers for the past three years, just so that they can trade them, no matter how abusive this is to the families.

Still, it is not at all clear that the bargaining chips both sides are holding will help speed up a deal. Prime Minister Benjamin Netanyahu said, "We will bring our boys back home. There are no free gifts." Hamas spokesman Fawzi Barhoum countered that, saying, "The fact that Israel still holds the bodies killed in the tunnel is a sign of weakness," while spokesman for Palestinian Islamic Jihad Daoud Shihab declared, "We are committed to taking action to get the bodies back in a way that will force the enemy to do that."

Neither of the two Palestinian organizations considered a much simpler approach to benefit the families of the dead on both sides: a simple exchange of bodies for humanitarian reasons.