An Israeli Bedouin woman who joined the Israel Police to serve her community has become the target of Arabs who consider her a traitor. 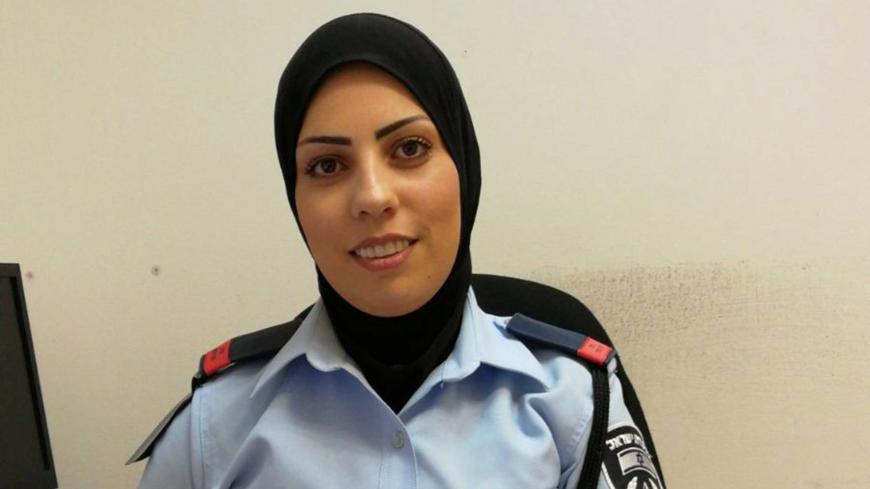 Israeli Bedouin policewoman Sabrin Saadi, who has caused much debate after a video of her being cursed at and spit on as she entered a police station went viral, is seen in an undated photograph. - Facebook/Mohammad Kabiya

A video making the rounds on social networks is causing an uproar in Israel's Arab sector, intensifying passions on both sides of a major dispute dividing the community. On one side are young people who feel that Israel is their country. On the other side are young people who feel like outsiders in Israel and oppose any move that they feel might normalize their relationship with the state.

On Nov. 21, Israel dedicated new police stations in Jisr az-Zarqa and Kafr Kanna, two Arab villages in the north. Four days later, a short video on Facebook showed Sabrin Saadi, a young policewoman from the Bedouin village of Basmat Tabun, making her way to the Kafr Kanna station in her uniform wearing a hijab, while a group of demonstrators curse and spit in her direction. Saadi entered the police station without responding to the provocation.

The video quickly went viral. It was shared by religious nationalist Arab groups in Israel and the West Bank as a warning to young Arab men and women who might consider joining the Israel Police or any other branch of the Israeli security establishment.

In an interview with Al-Monitor, Saadi's father, Ali Saadi, said that his daughter was very upset when she returned home at the end of the day, but that he encouraged her to continue to pursue the path she had chosen for herself, to serve her community. He then described her restrained response, which he said dignified the uniform she wore.

"I was pleased that she did not respond," the elder Saadi said. "She has thick skin, just like an elephant, and that's important in our society. Silence is the best response."

He went on to say, "We are part of this society, so we should serve it. The people attacking her are a gang of wild kids with nothing better to do with their lives. They should go find themselves and think about what, if anything, they have actually done on behalf of their community."

Saadi said that his daughter left an administrative position at Delta, a textile plant where she had worked for several years, to join the police force. "She believed that this is what is most necessary at this time," he remarked.

The decision to establish police stations in Arab localities is in response to soaring levels of violence in the Arab sector, the extensive stockpiling of arms in the community and calls by local authorities to show greater resolve in policing and enforcing the law in these settlements.

The most comprehensive study on the scope of violence and crime in the Arab sector was conducted by the Injaz Center for Professional Arab Local Governance in Israel and was published in 2015. According to the center's statistics, there has been a dramatic rise in crime in the Arab sector since 2007, paralleled by a rise in the number of Arabs incarcerated. In 2010, Arabs constituted 42% of all Israeli prisoners. By 2014, the figure had risen sharply, to 49%, including an overrepresentation of Arabs aged 12-18. Arabs constitute only 20% of Israel's total population.

About a year and a half ago, in April 2016, Jamal Hakrush of Kafr Kanna became the first Muslim deputy commissioner in the history of the Israel Police. As part of his duties, Hakrush heads a commission to improve police services in the Arab sector. At the ceremony marking Hakrush's appointment, Police Commissioner Roni Alsheikh called on young Arabs whom he described as "high quality" to join the police force "in order to instigate change." Alsheikh likely did not anticipate the fierce opposition from Arabs who deem anyone who joins the police a traitor or a collaborator.

Sabrin Saadi's friends have come together to support and defend her. One of them is Mohammad Kabiya, from the Bedouin village of Kaabiyye, in the north, who enlisted in the Israel Defense Forces, serving in the air force. He speaks with Saadi almost every day, promising her that he and his friends will do everything they can to reassure her that she has done the right thing. He also promises that he will not allow groups that he claims are led by the Islamic Movement to hurt her or other young people who follow her example.

Kabiya has also used his Facebook page to address Arab public figures who advocate extremism. "Your time is up," Kabiya wrote. "The new generation that has grown up sees the truth and feels a sense of belonging and identification. It understands the mood in the community much better than you and realizes that many of the problems facing Arab society are the result of those slogans, lies, and conspiracy theories that you have been peddling to us to benefit yourselves."

Kabiya told Al-Monitor that activists from the Arab Balad party have joined the Islamist demonstrators in their opposition, also considering the opening of new police stations to be an Israeli attempt to assert control over the Arab villages. Jamal Zahalka, Balad chairman and Knesset member, participated in one demonstration.

Addressing a crowd with signs condemning Internal Security Minister Gilad Erdan, Zahalka said, "This is no friendly hello. The Israel Police are spreading lies. We have seen that there has been no drop in crime rates in those settlements in which a police station has already been established." Zahalka claims that police stations are being put in Arab villages to track young Arabs for security purposes rather than for reasons of community safety.

Meanwhile, violence in the Arab sector continues unabated. Haaretz reported Nov. 29 that gun battles take place every night in the village of Salem, in the north. Children in the village are put to sleep in bathrooms to be spared the incessant gunfire outside.

Ali Saadi does not believe the verbal assaults against his daughter will evolve into physical violence. He says that many people from his village and Kafr Kanna have called to offer her support and encouragement. Meanwhile, she is considering bringing charges against her attackers for defamation. Her friends tell Al-Monitor that several lawyers from the Arab sector have already offered to represent her pro bono, out of a desire to help her and other young people who want to be a part of the country and serve their community.