After Egypt declared the technical negotiations with Ethiopia and Sudan regarding the Renaissance Dam as failed, it is now pursuing political and other means to address the crisis instead. 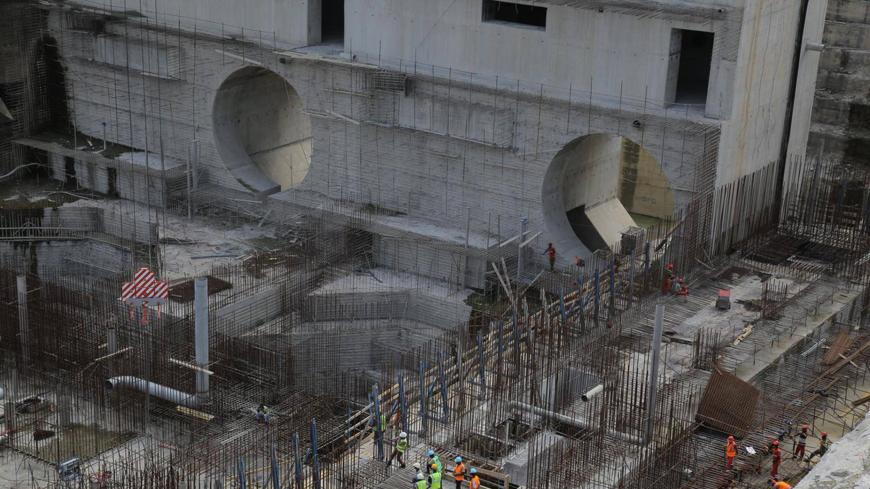 A view of the construction of the Grand Ethiopian Renaissance Dam in Ethiopia is seen in this undated photo. - Ethiopian News Agency

CAIRO — Egypt has officially announced that the technical negotiations with Ethiopia and Sudan over the Renaissance Dam have failed. The announcement came following a round of tripartite deliberations between all the countries' ministers of water in Cairo on Nov. 11 and 12 regarding the completion of the impact assessment of the Grand Ethiopian Renaissance Dam.

Egyptian Minister of Water and Irrigation Mohamed Abdel Aty said in a Nov. 12 statement, “Egypt is worried about the failure of the technical negotiations because it jeopardizes the future of cooperation between Sudan and Ethiopia and their ability to agree on the Renaissance Dam and to avoid its potential risks while preserving Egypt’s water security.”

The statement of the Egyptian Ministry of Water and Irrigation was a bold revelation of the reality of the negotiations behind closed doors. The negotiations began when Egyptian President Abdel Fattah al-Sisi and his Ethiopian and Sudanese counterparts signed the Declaration of Principles in March 2015 as a cooperation framework on the Renaissance Dam issue.

Ever since, Egypt has taken part in a series of deliberations involving experts and state officials. However, despite the deliberations, the two most contentious points concerning the filling and operation of the dam remain unresolved.

Egypt, Sudan and Ethiopia had formed a tripartite national committee that chose two French consultancy firms to conduct a technical study on the hydraulic, environmental, economic and social impact of the Renaissance Dam on Egypt and Sudan. After agreeing on the terms and the implementation method of the studies, contracts were signed in September 2016 to conduct the studies over a period of 11 months.

But the disputes began surfacing when the consultancy firms started their work.

In the statement issued by the Egyptian Ministry of Water and Irrigation, Egypt accused Sudan and Ethiopia of trying to introduce amendments to the Declaration of Principles "in their interest, knowing that such amendments would undermine the results of the studies and render them useless.”

An official in the Egyptian negotiation delegation revealed to Al-Monitor on condition of anonymity the real reasons behind the dispute, saying, “Egypt wants the technical studies to produce clear results about the negative effects of the Renaissance Dam on its water security, in particular the impact on water flow rates to the High Dam lake, the impact on the salinity in Egyptian agricultural lands in the Delta and the drop in electricity generation in the High Dam. But Ethiopia and Sudan are trying to direct the studies in a way that portrays the Renaissance Dam as having positive impacts and plays up shared interests.”

The official added, “The most contentious issue is the impact of the Renaissance Dam on Egypt’s current utilization of [its historical share of] the Nile Water guaranteed under the 1959 agreement, which Ethiopia refuses to acknowledge. The dispute is pivotal, and the Egyptian delegation cannot let it go it because it is a pillar to ensuring Egypt’s water interests.”

The official noted, “Sudan raised another issue of dispute related to the suitability of the mechanism to measure its share of the Nile Water, estimated at 18.5 billion cubic meters.”

He went on, “Egypt realized the danger of wasting time on the technical track in light of the intransigence of the other parties. It was important to reveal the truth after its efforts to use legal and technical arguments to support its stance in the course of the negotiations failed. A plan to take diplomatic, legal and technical action to garner regional and international support for the Egyptian position is underway.”

Sudan condemned Egypt’s statement. Sudanese Ambassador to Egypt Abdul Hamid Abdul Mahmoud told Al-Monitor, “Egypt’s reaction stirs suspicion about the future of negotiations and does not pave the way for any sort of action, be it in the interest of Egypt or any of the negotiating parties.”

He asserted, “Sudan has tried to save the technical and political negotiations, and it has the right to take the path that would serve its interests best.”

Cairo did not stop with the press statement. Egyptian Foreign Minister Sameh Shoukry met with his Saudi counterpart Adel al-Jubeir on Nov. 14. The Egyptian Foreign Ministry released a press statement in the wake of the meeting, saying, “The kingdom understands Egypt’s concerns over its water security and the importance of committing to the rules of international law.”

Egypt’s Cabinet issued a statement during its first meeting following the Nov. 15 negotiations, saying, “We will take the necessary measures on all levels, since water security is central to Egypt’s national security.”

Rawiya Toufic, assistant professor at the University of Cairo and researcher at the German Development Institute, told Al-Monitor, “Egypt finally admitted the failure of the technical track, which reached a dead end. … Egypt still has to outline the next steps to overcome the crisis.”

She went on, “The Egyptian Ministry of Foreign Affairs and Ministry of Irrigation as well as the cabinet should take action in the next phase to clarify Egypt’s stance on all levels to the public at home and abroad.”

Toufic argued, “Egypt’s presidential intervention at this point will bring nothing new to the table. The presidential summit of the Nile Basin countries in Uganda in June proved that. The Ministry of Foreign Affairs and the Ministry of Irrigation should take the lead now and give a clear idea of Egypt’s stance, the concessions it expects Ethiopia to make and what Egypt can offer in return.”

On Egypt’s escalatory steps so far, Toufic commented, “Legal action at this point might not give decisive results in Egypt’s favor, because there is no tangible harm done yet. Besides, the political tools are weak amid the complex regional context. Gulf countries are preoccupied with their disputes and do not hold real cards to pressure Ethiopia. Eritrea is also fighting its own internal demons, and Sudan’s stance is known and grows firmer by the day.”

With the deteriorating negotiations that have not produced any solutions to appease Egypt’s concerns about the Renaissance Dam, the Egyptian administration has no options left but to expose the truth of what is happening at the negotiation table and focus on direct ways of coming to agreements.

But like most Egypt's moves in the matter, any further efforts are likely to come too late, as the Declaration of Principles recognizes Ethiopia’s right and sovereignty in building and operating the dam without binding it to any written pledges to involve Egypt in the storage and operation processes.