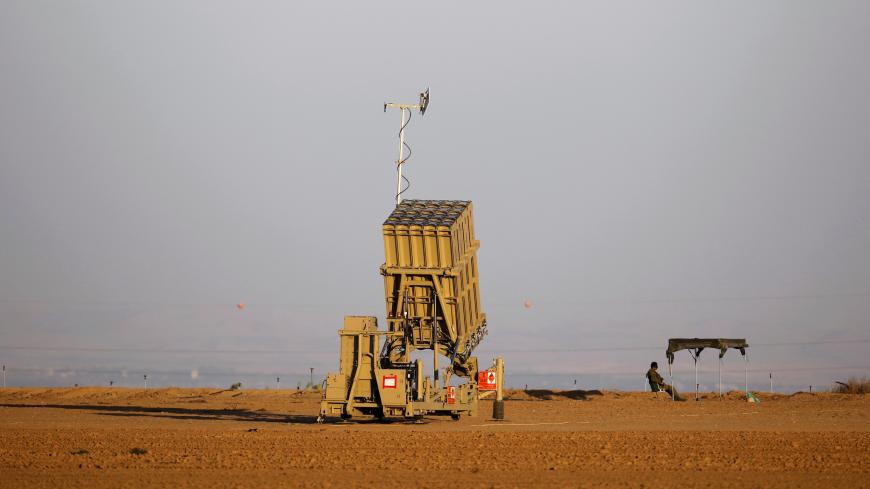 Congress released Nov. 9 an annual defense bill that calls for $705 million for Israel’s missile defense program, a tacit acknowledgment of the threat posed by Iran and Hezbollah.

The requested figure is included in compromise legislation between the House and Senate Armed Services committees, both of which had called for that level of funding in their respective defense bills. It represents a $558 million increase over the Donald Trump administration’s request for fiscal year 2018, including $268.5 million for research and development and $290 million for procurement of the jointly developed, three-layered missile system that protects Israel from small projectiles, artillery and ballistic missiles.

The Israeli request, which must still be allocated through separate spending legislation, is part of a $700 billion authorization for the Pentagon’s activities around the world. A Senate Armed Services Committee aide told Al-Monitor that legislators wanted to give Israel additional protection from enhanced threats from regional actors, including low-grade rockets fired by Hamas and Iranian proxies in Syria and Lebanon, and a growing ballistic missile threat from Tehran.

“Israel is arguably under the greatest threat of rockets and missiles in the world with the exception of South Korea and Japan,” said Ian Williams, an associate fellow at the Center for Strategic and International Studies, a Washington think tank.

The $500 million boost, Williams said, “is just kind of how it's played. The president's budget will be a certain number, and Congress' budget will come in and more than double it.” Legislators added more than $1.5 billion to presidential requests for Israel’s missile defense between 2014 and 2016.

By law, Congress has a mandate to maintain Israel’s qualitative military edge over its Middle East neighbors, which this move could expand. With backing from the United States, Israel has recently reinforced its three layers of protection against incoming missiles. Last year, the United States and Israel inked a 10-year memorandum of understanding worth $38 billion — a more than 20% bump over the previous memorandum. Washington also pledged $500 million each year for Israel’s three-tiered missile defense scheme under the agreement.

David’s Sling, a joint US-Israeli development that can shoot down missiles that range up to 190 miles, is authorized to receive an additional $120 million under the new defense bill, according to a Senate summary. The bill also requests $92 million for the Iron Dome system, designed to intercept small projectiles and artillery, expanding it from 10 to 15 missile batteries. And the Arrow-2 and Arrow-3 batteries that took down Syrian anti-aircraft missiles headed for Israeli fighter jets in March are also in line to get $120 million under the bill.

The money could be coming at a critical time for Israel, analysts say, as Israel could face shortages for interceptor missiles. The Iron Dome program, for instance, “takes advantage of the fact that these rockets are very inaccurate,” Williams said, shooting down only about 16% of small missiles headed for Israel since the rest land far from populated areas.

“I don't think it's out of the realm of possibility that Iran or Hezbollah's rockets will get more accurate,” he added.

The move also comes just months after the establishment of new US military facilities in Israel that could signify a deepening commitment to bolstering Israel’s missile defenses.

Pentagon officials stressed that a September ribbon-cutting was not for a new American military base, but rather for new living facilities at an Israeli air base at Camp Bisla, in the south of the country. Still, it will give US troops serving there a more permanent foothold in the region as Israel faces continued security threats from incoming drones and ballistic missiles.

US soldiers at Camp Bisla are assigned to the US Army Europe’s 13th Missile Defense Battalion. First reactivated in Germany after a 19-year post-Cold War lapse in activity, that unit tracks intercontinental ballistic missiles using early warning and surveillance systems.

US European Command and the Israel Defense Forces also hold a joint military exercise every two years — most recently in 2016 — designed to strengthen ballistic missile defenses against Israel’s foreign adversaries such as Iran. US officials did not respond to an Al-Monitor request for the number of US troops serving at the Israeli site.

“The fact that [joint training] is being done proudly and publicly is an important signal of the US commitment to Israel’s security and common adversaries in the region,” Daniel Shapiro, who served as US ambassador to Israel during the Barack Obama administration, told Al-Monitor.

The move, Shapiro added, signals “that US commitment to missile defense is ongoing and deepening.”