Selahattin Demirtas, the jailed leader of Turkey’s Kurdish political movement, tells Al-Monitor from prison how arts and literature have become his way of resisting oppression and despair. 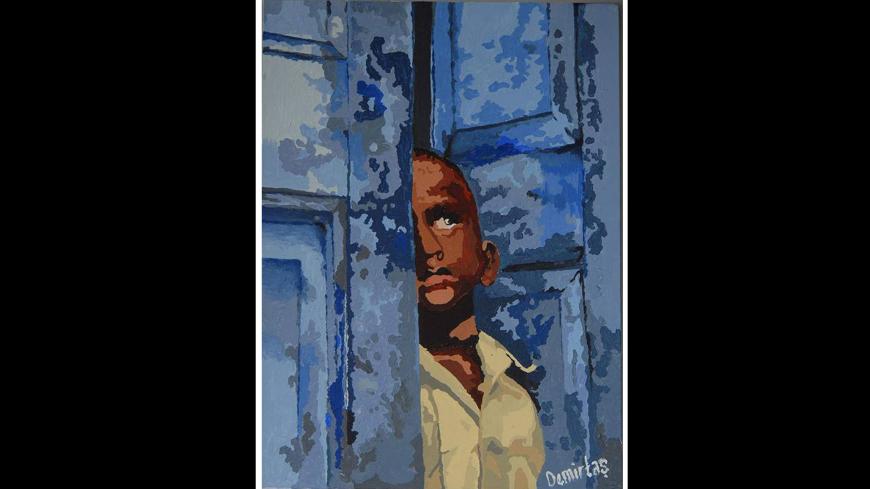 A painting by Selahattin Demirtas, who is the head of Turkey’s main Kurdish political movement and who has been behind bars on terror-related charges for almost a year. Posted June 1, 2017. - Twitter/ZANA_VOANEWS

Selahattin Demirtas, the 44-year-old leader of Turkey’s main Kurdish political movement, has been behind bars on terror-related charges for almost a year. The details of the charges remain ambiguous amid legal controversies surrounding his ongoing trial. This, however, is not the only reason why Demirtas has remained in the news.

A lawyer by profession, the co-chair of the Peoples’ Democratic Party (HDP) had always stood out on the political scene, introducing humor, sharp wit and a genial touch to the rough-and-tumble Turkish politics. Incarcerated in the northwestern province of Edirne, he continues to stand out even from prison — this time through arts and literature. Along with the occasional political statements, his messages from jail have come in the form of paintings, poems and most recently a collection of stories, reinforcing his unique image in Turkish politics.

In the run-up to the June 2015 elections in which the HDP made a landmark breakthrough into parliament, Demirtas had already given hints of his artistic talent, singing and playing the saz — a folk instrument — during a memorable interview on a leading news channel.

In December, about a month and a half after Demirtas was arrested, HDP member Sirri Sureyya Onder shared a story his leader had written in jail, adding the following message: “Along with saz-playing … Selahattin Demirtas has another little-known feature, which is story-writing.”

Another surprise followed in April when Demirtas’ lawyers shared the image of a painting by the HDP leader, which depicted a horse with a mane swaying in the wind. On June 1, International Children’s Day, the image of a second Demirtas painting reached the public eye. It depicted a demure-looking boy peering through a half-open door.

In the meantime, Demirtas made headlines with a poem titled “Contagious Courage,” which was banned soon after it was disseminated by his lawyers. According to the authorities, the poem — a message of hope and defiance against oppression — amounted to “terrorist propaganda.” The police even raided an HDP building to remove a poster with several lines from the poem.

In mid-September, Demirtas became a published writer. Sixteen stories — all written in jail and faxed to the publishing house after inspection by prison authorities — became a book titled “Seher,” which means “dawn” and doubles as a female name. The volume instantly became a best-seller, with 90,000 copies sold in 20 days. On Oct. 5, the publishing house announced a reprint.

Obviously, arts and literature have become a form of resistance for Demirtas — both against his own incarceration and Turkey’s increasingly authoritarian government. In a written response to questions by Al-Monitor, Demirtas stressed he saw arts and literature as “a very important means” of defying oppression and fear.

“Arts and literature are like the common mother tongue of humanity. Authoritarian regimes can obstruct active politics through myriad methods of tyranny, but obstructing arts and literature is not easy for any tyrant,” he said. “The main motivation of fascism is to keep society in a constant state of fear. Precisely here, arts and literature come as a powerful, righteous and legitimate form of defiance. The virus of fascism cannot propagate if courage is there. We have to nourish and spread courage with every means available, at every opportunity.”

Demirtas’ embrace of arts and literature makes him a rarity both on Turkey’s political scene and among Kurdish politicians in the Middle East. This might carry political risks, but he is happy to be “one of the people.”

In further remarks to Al-Monitor, he wrote, “All around the world but especially in the Middle East, politics is perceived as the realm of frowning, angry and overbearing men. I think that even this profile is an important element in intimidating society. Politics should be taken away from those men and returned to its real owner: the people. My party and I have been struggling for that, trying to show that we can do without that profile of the so-called leader. Certainly, this carries the risk of weakening our political weight, but one needs to take risks to destroy certain cliches. This is what I am trying to do. I speak the language of the people because I am actually one of the people. Other politicians — I mean those who act as if they are above the people — are the product of great lies, fallacy and illusion. Do not trust them. Most of them are crooks.”

When it comes to “Seher,” one of the most poignant pieces in the book is the story of a woman who dies in a shelling in Aleppo, and it involves also a staggering love story. In every line of the piece we see female characters, which reveals another important side of Demirtas, both as a male writer and a Kurdish politician in the Middle East.

Asked whether it is difficult to write about women in a male-dominated region, he responded, “I am trying to break prejudices, but this is not that easy, really." He added, “Neither advocating nor ensuring gender equality is easy [in the Middle East]. Still, Kurdish women have made the biggest progress on this issue. This has had a positive impact on Kurdish men as well.”

Demirtas, who hails from the Zaza minority, writes in Turkish. On the ever-controversial issue of languages, he said, “My mother tongue is Zazaki, but I was schooled in Turkish for 18 years. Education in languages other than Turkish remains banned in Turkey. As a result, I have a better command of Turkish than my mother tongue. I have no problem with speaking good Turkish; on the contrary, I am very happy with it. At the same time, I am very angry and upset that this had to happen at the expense of making me forget my mother tongue. All mother tongues are equally precious, and ours deserves that appreciation too. The mother tongue is the person’s spirit and dignity. I wish I could write in my mother tongue. The United Nations has designated Zazaki as an endangered language. Still, it remains banned from being used as a language of education in Turkey.”

Emirali Turkmen, the editor-in-chief of Dipnot, Demirtas’ publishing house, told Al-Monitor that “Seher” will be translated into Zazaki, Kurdish and English. He sounded quite happy with the reader interest so far. “People are buying two or three copies, and some even say they buy the book as a precious gift to their loved ones,” he said. Each edition of the book has a different cover color as “a tribute to Demirtas’ colorful personality,” he added.

In another surprise to his supporters, Demirtas resumed tweeting as soon as “Seher” hit the bookstores. This, of course, became possible through aides posting the messages he communicated from prison. The authorities, however, were not convinced, and a search had to be conducted in his cell. Hilariously, this became known also via Demirtas’ tweets. “Hello, friends. I’m not posting these tweets from prison. Don’t say you already know because some in Ankara don’t,” his message said. True to his playful style, he added, “No tweets were discovered [in the search], of course. There was only a kettle for tea, and they concluded it cannot be used for tweeting.”

In Kurdish folklore, there is the distinct art of dengbej, which is the singing of epics and stories, often about struggle, oppression and grief. The late Kurdish novelist Mehmed Uzun described the dengbej as “the power to resist.” By using arts and literature as his own way of resistance, Demirtas is reaching out beyond prison walls and growing into a modern dengbej.