The new leader of the Syrian national coalition shared with Al-Monitor his plans for lobbying the Trump administration during his first visit to Washington. 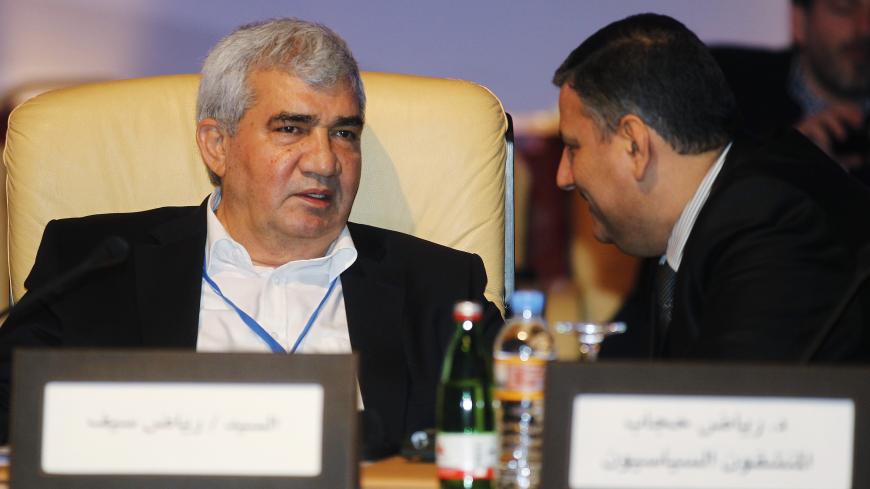 Russia and Iran are hijacking the Syria peace talks to outmaneuver the United States and cement their influence in the country for decades to come, opposition leader Riad Seif told Al-Monitor in an exclusive interview on the sidelines of his first official visit to Washington.

Seif was in town last week for a two-day conference aimed at organizing the Syrian-American community into a potent lobbying force in the Donald Trump era. As head of the Istanbul-based National Coalition of Syrian Revolutionary and Opposition Forces since May, Seif has made it a priority to court US support for the beleaguered opposition and warn that Moscow and Tehran are using parallel peace talks in Astana to supplant UN-backed negotiations in Geneva.

“Our concern is that Astana will supersede Geneva,” he told Al-Monitor during an interview at his hotel. “If Astana is the internal solution, this will be very catastrophic and devastating for the Syrian people.”

In particular, Seif raised concerns that so-called de-escalation zones negotiated in Astana amount to little more than a partitioning of Syria among rival powers, without any say from the Syrian people. The coalition announced today that it was boycotting the Astana talks, declaring that it “will not participate in any negotiations with the regime outside Geneva or without UN sponsorship.”

The United States only has observer status at the Astana talks, which are spearheaded by Bashar al-Assad regime backers Russia and Iran and opposition patron Turkey. The seventh round of the Astana talks concluded Oct. 31.

A longtime dissident and former member of parliament who was detained and tortured under Assad’s rule, Seif said both the Barack Obama and the Trump administrations had “failed” secular opposition forces by preventing them from fighting the regime and ending programs to arm the rebels. He urged Trump to play a more forceful role in backing the opposition in order to compel Assad and his international backers to make concessions at the negotiating table.

“We need political, military and economic support from the United States,” said Seif. “If the coalition is strong, it will make an equilibrium on the ground and will force the regime to sit at the table for a political solution.”

Seif said the opposition wants to work with the Trump administration on two common goals: fighting terrorism and “countering the Iranian influence in Syria and in the region while keeping the Russians from exerting more force and control in the region.”

To that end, Seif told Al-Monitor that the opposition plans to double down on lobbying Congress and the White House by uniting the opposition and the Syrian diaspora in the United States. He pointed out that 21 members of Congress attended the forum, including House Foreign Affairs Committee Chairman Ed Royce, R-Calif. An opposition official in Washington told Al-Monitor that Seif also met with State Department and White House National Security Council officials on Oct. 31.

“We will have a permanent office here in Washington with the cooperation of the Syrian American community,” Seif said. “From now on, we will be concentrating on the most important ally for us, the Americans.”

The below transcript of the interview, conducted via a translator, has been edited for brevity and clarity.

Al-Monitor:  Can you tell me more about your trip to Washington? Who did you meet with during the [Oct. 26-27] American Forum on Syria Policy? And what objectives are you pursuing here on behalf of the coalition?

On the first day of the conference, we had 21 congressmen who support the Syrian revolution. They emphasized their support and are considered friends of the Syrian people. We are hoping to build on this relationship and to develop it with the Congress. Since I was staying here for two days, we did not have any plan to meet officials from the US administration because this meeting requires prior preparations.

The second task is managing the liberated areas in order not to leave a vacuum after the withdrawal of the regime forces. However, due to certain circumstances, the coalition wasn't able to take on this role. This has caused the most damage. This vacuum of power was filled in by extremist groups like the Islamic State [IS] and [Jabhat] al-Nusra [now known as Jabhat Fatah al-Sham].

We were trying to avoid all these mistakes, and after a lot of insistence, we are able to retake the border crossings from some military factions. This will be followed up by other quick steps. They will be delivering services and other things. This will be done with the coordination and the cooperation of the Turkish government.

And regarding [the former IS stronghold of] Raqqa, we hope to be forming a local provincial council that is composed of the people of Raqqa.

Seif:  No. This step will be very difficult to do, but the role of the coalition and its interim government will be very important and crucial in order to guarantee stability. And of course the same thing will be done in Idlib after it is rid of al-Nusra. And this will apply in all other areas of de-escalation of violence like Deir ez-Zor and others.

Al-Monitor:  You mentioned that you want places like Raqqa to be governed by the local residents. Did you support the US decision to arm the YPG to retake Raqqa? If not, what would your preferred strategy have been?

Seif:  The people of Raqqa cannot accept to be occupied by the YPG in a direct or indirect way. There is a feeling of injustice and anger that is growing inside Raqqa residents due to the US support to the YPG. The YPG has a black history and black record in Syria because they have displaced a lot of Syrians from different areas.

Even if the United States wants to reward the YPG for their participation in the liberation of Raqqa, it should not be at the expense of the Raqqa population. The provincial council of Raqqa should be in accordance with the demographic distribution of Raqqa, and they should respect human rights.

This is the ideal solution. However, the continuation of the situation like it is right now might be the beginning of a civil conflict in Raqqa.

Al-Monitor:  The next round of Syria peace talks [spearheaded by Russia, Turkey and Iran] in Astana will take place Monday and Tuesday [Oct. 30-31]. Will you be attending the talks? What outcome do you hope will emerge?

Seif:  The coalition is not participating officially in Astana. However, there are a significant number of Astana members who come from military factions that are represented in the coalition. The legal expert in Astana is also from the coalition. But he's going there on his personal behalf, not as a representative of the coalition.

We have some concerns regarding Astana. Our concern is that Astana will supersede [the UN-sponsored talks in] Geneva and be the alternative of Geneva. We see that is the Russian plan.

If Astana is the internal solution, this will be very catastrophic and devastating for the Syrian people. The four de-escalation zones [negotiated during the Astana talks] are developing in a very dangerous way, and they are going to turn into four countries. They say these four de-escalation zones are only for six months, but they're renewable. They might extend the duration. So this might go for dozens of years or maybe forever.

Therefore, we don't expect much from Astana. And we hope that the track of Geneva will be reactivated because the political solution is the only solution in Syria and the preservation of Syrian unity and territory.

Al-Monitor:  Have you explained your concerns to the Turkish government and some of the military factions in the coalition? Have they been receptive?

Seif:  Their answer is Astana could never be the alternative to Geneva and they are paying attention to that with great scrutiny. But from previous experience, we have a lot of concerns and they know our concerns because the Russians are the dominating ones. All of Russia’s plans have been implemented successfully due to the absence of an American role and an American force.

Al-Monitor:  The Trump administration has opted to stop arming the opposition against the regime, and the United States only has an observer status in Astana. What do you make of that decreased support for the opposition?

Seif:  The alliance and the cooperation between the United States and the armed groups have been going through a lot of failed experiences because the United States has put in a condition for those factions that they should only be fighting IS and not the regime or anyone else. The Americans have failed these armed groups, so they didn't have any other choice except to go in and talk to the YPG because the Americans wouldn't send troops on the ground.

With the current administration, we have two common goals. The first one is countering terrorism, and the second one is countering the Iranian influence in Syria and in the region while keeping the Russians from exerting more force and control in the region. We want the US administration to consider the coalition as a partner whom they can trust and count on in order to achieve common goals.

Al-Monitor:  You said you weren't happy with the coalition's previous lobbying of the administration. What would be your approach?

Seif:  We will have a permanent office here in Washington with the cooperation of the Syrian American community. From now on, we will be concentrating on the most important ally for us, the Americans. There had been a common consensus on this. Soon it will turn to action.

Al-Monitor:  Do you have a rough timeline for all this?

Al-Monitor:  Now that IS is almost defeated, what do you want the United States to do in Syria?

Seif:  One of the strategic mistakes that we have committed is not countering terrorism in its early stages. We have not treated the early stages of extremism since its beginning because of the depression that we were going through. None of the 15 armed groups that we represent in the coalition are extremist in their position. There is no Ahrar al-Sham or similar groups. Even Jaish al-Islam is not represented in it.

One of the important achievements of the revolution is that the population did not embrace Islamist extremists. There is no role for Islamist politics in it. Political Islam wouldn't have any main role. We shouldn't use force to involve religion in politics.