A project co-sponsored by the Ministry of Education and An-Najah National University will enable musically talented youths to find a platform to develop their talent. 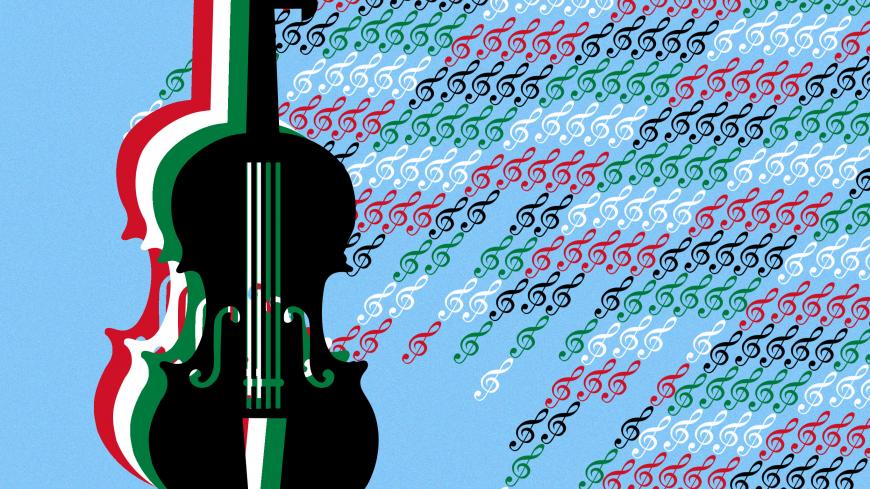 RAMALLAH, West Bank — Ghassan al-Rimawi, a 17-year-old student from the city of Ramallah, gave a violin performance at An-Najah National Univeristy’s Faculty of Fine Arts in Nablus on Oct. 7. and was selected by the supervisory committee tasked with selecting students for the first National School Orchestra.

Rimawi, a 12th-grader, will be among about 50 students from public and private schools who will form the orchestra, which is part of an initiative the Ministry of Education announced Sept. 23.

Sadeq al-Khaddour, the spokesman for the Ministry of Education, told Al-Monitor that the ministry is seeking to provide a platform for students with musical talent.

The Ministry of Education will work with An-Najah National University to select and train students who have graduated from high school and are ready to go to college. Khaddour added that the ministry aimed to create orchestras, choirs and folkloric dance (known as dabke) groups that can participate in international and local festivals and display the musical talent of Palestinian students to the world.

According to Khaddour, the first step in the formation of this orchestra is the selection of students, who will be either young people who have been playing an instrument for a while or beginners with impressive talent. The second step is signing cooperation agreements with music training centers to help train those who are interested, so there would be a large pool of candidates who can become part of the 50-strong orchestra.

Khaddour said that to achieve this step, the ministry is keeping an open mind while considering the options at hand. He added that parents who have musical experience will be able to join the orchestra with their children should they so desire.

Asked about the details of the formation of the orchestra and the selection of students, Iman al-Ahmad, a music teacher and the head of the musical activity at the Ministry of Education, said that the ministry, through cooperation with the Faculty of Fine Arts at An-Najah National University, was able to choose a number of students from various local education directorates. After training, 40 to 50 students will be selected to form the orchestra.

The Faculty of Fine Arts will provide academics to select and train talented young musicians. It will also give space and instruments necessary for the orchestra, if the students selected do not already have them.

The selection process is in its first stages for students who had received musical training outside their regular schools. The selection committees chose the best among those students, in terms of talent and proficiency.

“We raised the idea of providing musical instruments to students so that those who can’t afford instruments could get a chance,” said Ahmad. “We are now preparing a project to cooperate with private music centers so we provide talented students with instruments through funding from local institutions, such as banks and major companies.”

Ahmad, who graduated from An-Najah National University from the Music Department's piano section, said, “This chance has been denied to many students in the past, and we hope as a next step to create a platform for the establishment of a national orchestra for adults so that once they graduate from school, students would be encouraged to major in music at the university level.”

The Faculty of Fine Arts at An-Najah National University is the only Palestinian university that provides general music lessons in Palestine, although an Arabic music program exists in Ramallah’s Birzeit University. This led Ahmad to relocate in 2000 from the United Arab Emirates, where her family resides, to Nablus to major in music after having completed high school.

“I hope our students will have the opportunity to learn music and participate in this orchestra, which will be able to participate in international conferences and take part in the ministry’s foreign student activities,” Ahmad added.