Egypt prepares for return of IS fighters' children

Egypt is preparing to welcome and provide rehabilitation services for 15 Egyptian children who were found in Islamic State camps in Libya. 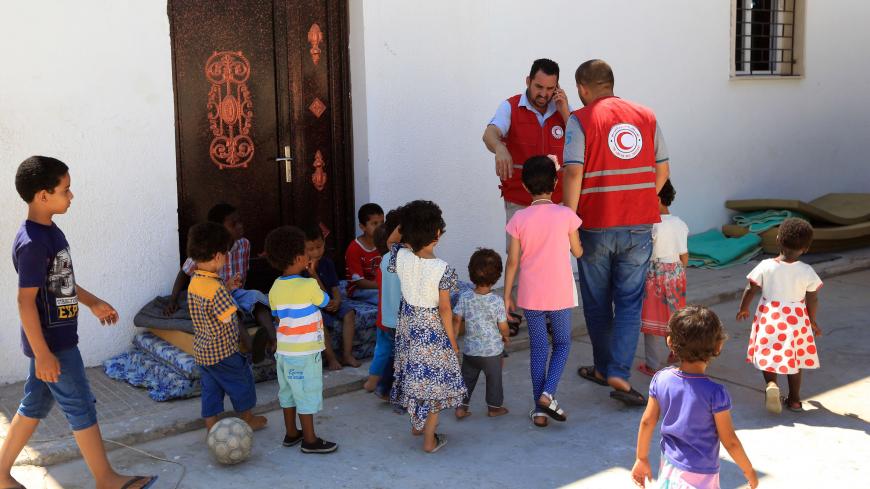 Children of Islamic State fighters are shown at the Libyan Red Crescent headquarters where they are living in Misrata, Aug. 2, 2017 - GETTY/AFP/Mahmud Turkia

CAIRO — Egypt is preparing for the handover of 15 Egyptian children from Libya in early November. Their Islamic State-affiliated parents were either killed or arrested during the Libyan army’s operations against the organization in Misrata.

The family members of terrorists are highly stigmatized. They can be denied social and professional opportunities such as joining the police, armed forces or judiciary. For children, early interaction with terrorists can leave traces of aggression, antisocial behavior and misconceptions about Islam.

After liberating Misrata in December 2016, the Libyan army found 125 children, including 15 Egyptians, 22 Tunisians, 13 Sudanese, 17 Algerians and 12 Libyans, among other European and African children.

After the liberation operation, the children were sent to a rehabilitation camp, where a psychological and educational program was to help reintegrate them into their local communities. The program has been running since January 2017 under the auspices of the Libyan Red Crescent.

According to a Sept. 25 report by Egypt's ad-Dostor newspaper, the children suffer panic attacks and psychological troubles due to severe physical injuries. They exhibit behavioral problems as a result of extremist indoctrination. For instance, 8-year-old J.H. became deeply withdrawn and had panic attacks after living in IS camps, where she witnessed crimes and feared pursuit by security forces. H.M., 7, was aggressive toward therapists and his peers. He threw his toys at others as though the toys were grenades.

Journalist Ahmed Atef Ramadan told Al-Monitor, “I followed the psychological situation of these kids after rehabilitation. I can confirm that the program has been successful, and we are getting ready to welcome these kids in coordination with the Red Crescent and Libyan security and army, after Egyptian security carries out a background check on their families to make sure they do not harbor extremists.”

Ramadan added, “If there are terrorist members in the children's families, I think they will be put in orphanages so that they won’t be re-exposed to extremist thought. They will also undergo psychological examination by the Egyptian Ministry of Health as soon as they get to Egypt, which will continue to follow up on the rehabilitation and treatment of those who need it.”

An informed source at the Ministry of Health told Al-Monitor on condition of anonymity, “The crisis is that we do not have specialized care centers for such cases. There are conventional orphanages in Egypt where ordinary children who lost their parents are raised and educated. The special cases like IS children require specialized treatment, care and supervision. I think their interaction with other children in the absence of supervision would delay their treatment and would also harm the other children. We need specialized centers to treat these cases.”

Magdy Morshed, a member of the parliamentary health committee, told Al-Monitor, “We need such care centers as these kids would grow into terrorists if they do not become disciplined. They must be cared for to ensure they will be well-behaved citizens who are not under the influence of terrorist groups because they are not guilty of their parents’ crimes. There must be a global strategy to tend to the kids since the problem threatens not only Egypt and the Arab region but the whole world, as IS members include Europeans.”

The Observer reported Oct. 7 that 5,000 Syrian and Iraqi women have had children by European fathers who have died in Syria. The widows have asked for shelter for themselves and their children in their husbands' countries, but were denied.

Ramadan said, “I hope the concerned parties will establish care centers for Egyptian children whose parents were members of IS because it is not their fault. I think there is a will to establish such centers and develop rehabilitation programs to help the children develop and prevent them from becoming a threat to society. I believe many Egyptians are now keener on the integration of these children in society. The stigma has become less of a hazard. They can become officers and judges, and society no longer fears this possibility.”

Egypt plays a pivotal role in this training, and many of those interested in the future of IS members’ children hope Egypt will establish specialized care centers and instate rehabilitation programs. Abu Zoukia said, “The success of the integration of these children in society is central to the treatment and rehabilitation process.”