Major Russian interests in Iraqi Kurdistan’s energy sector are seen as having a bearing on Turkey’s threatening response to the Kurdish independence referendum. 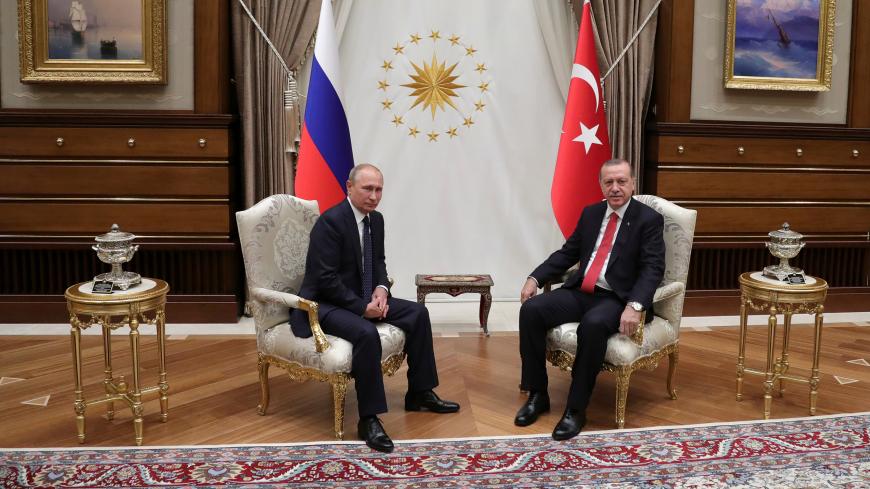 ANKARA, Turkey — After Iraqi Kurds voted for independence Sept. 25, Turkish President Recep Tayyip Erdogan threatened to “starve” them into submission by cutting the Kirkuk-Ceyhan oil pipeline and closing the border. He even threatened to send troops into Iraqi Kurdistan. But by the end of the week, all Turkey appeared to have done was to stop Turkish airliners from flying to northern Iraq.

Some journalists who went to the presidential palace for Erdogan’s meeting with Russian President Vladimir Putin the evening of Sept. 28 planned to ask the Turkish leader about the difference between his threats and delivery. They were disappointed. Erdogan did not take any questions. He closed the press conference as soon as he and Putin completed their statements about the talks.

Yet there were hints of what drives the two leaders and their differences.

Erdogan stressed that he and Putin agreed on the territorial integrity of Iraq and Syria, meaning no Kurdish secession in either state. He said the Iraqi Kurds had to be “prevented” from making further “grave mistakes” after the Sept. 25 referendum, in which almost 93% voted in favor of independence, with the turnout at 72%.

“It is important that the international community sides with Iraq’s territorial integrity and political unity,” Erdogan said. This seemed to be a departure from his stance four days before. As the Iraqi Kurds went to the polls, Erdogan had spoken as if the world did not count, suggesting that Turkey would act alone. “We have the tap,” Erdogan said, referring to Turkey’s control of the Kirkuk-Ceyhan pipeline. “If we turn it off, let’s see what northern Iraq will do with its oil. Through which channel will their oil flow?”

Iraqi Kurdistan shares borders with Syria, Iran and Turkey, all of which opposed the referendum, along with the central government in Baghdad.

More ominously, Erdogan had said Sept. 25 that it was “not for nothing” that the Turkish army was performing military drills along the border with Iraqi Kurdistan. “If necessary, we will do what we did in Syria,” Erdogan said, referring to Turkish military operations in Syria.

In his statement to the press, Putin withheld any comment on Erdogan’s threats against the Iraqi Kurds, while praising the Turkish leader for agreeing to deploy troops to create de-escalation zones in Syria, particularly the new zone in Idlib province.

"I consider these agreements our common, extremely important success," Putin said. "We are creating conditions for the refugees' return and — what is of principal importance — for stepping up the search for a long-term political settlement in Geneva."

On Iraq, Putin said his position had been expressed by the Russian Foreign Ministry the day before. The statement expressed commitment to the territorial integrity of Iraq but added, “Moscow respects the national aspirations of the Kurds” — a phrase Erdogan would find utterly unpalatable.

The ministry went on to say, “We believe that all disputes that may exist between the Iraqi federal government and the government of the autonomous Kurdish Region can and should be solved through constructive and respectful dialogue, with a view to devising a mutually acceptable formula of coexistence within a single Iraqi state.”

The statement is careful to uphold Iraqi unity, but it also recognizes the value of Kurdish “national aspirations” and “constructive and respectful dialogue.” This seems to leave open the possibility that should such dialogue lead to a mutually agreed secession, Russia would recognize a Kurdish state.

Erdogan would not accept a Kurdish state, however it is achieved. This week he said the Iraqi Kurds are incapable of becoming independent: “They don’t have an idea on how to be a state. They think that they are a state just by saying it. This can’t and won’t happen.”

But as Peter Galbraith, a former US ambassador and champion of the Kurdish cause, said earlier this year, once the Iraqi Kurds have voted for independence, “The US and others will adjust to that reality.” No fewer than 27 countries have emerged through secession since 1991, Galbraith said.

At press time, the only sanctions that Turkey had imposed on the Iraqi Kurds were halting flights by Turkish airliners, private and state-owned, to Erbil and Sulaimaniyah, telling the representative of Iraqi Kurdish leader Massoud Barzani he would not be allowed to return to his post in Ankara, banning the Iraqi Kurdish TV channel Rudaw from Turkish airwaves and ending Turkish military training for the Iraqi Kurdish peshmerga force.

What has caused Erdogan to refrain from shutting the oil pipeline and the border?

On the pipeline, the answer is Russia, according to Eugene Kogan, a defense and security expert based in Tbilisi, Georgia.

Russia has invested $4 billion in Iraqi Kurdistan’s oil and natural gas industries in the past 12 months, surpassing the United States to become the biggest foreign investor in northern Iraq. The state oil corporation, Rosneft, plans to ship large quantities of crude from Turkey’s Ceyhan terminal to Germany, where it will be refined and sold to Europeans. Any tightening of the valves on the Kirkuk-Ceyhan pipeline would impede that trade.

“Erdogan has to listen very carefully to what Putin is telling him,” Kogan told Al-Monitor. Russia’s purchase of Kurdish oil is “exactly what holds Erdogan back from closing the pipeline.”

Erdogan is constrained also by Turkey’s own economics. The country is recovering from a near recession. Turkey sold $7.6 billion worth of food, consumer goods, construction materials and other goods to Iraq last year, according to the Turkish Statistics Institute. Turkish Economy Minister Nihat Zeybekci said this week that nonoil trade with Iraqi Kurdistan was worth $2.5 billion.

If Turkey closes the border, “Not only would the Kurds lose, but Turkey would also lose,” Turkish political scientist Dogu Ergil told Al-Monitor. The loss of trade would hit Turkish manufacturers and particularly Turkish Kurdish companies that specialize in selling goods across the border. One-third of Turkish Kurds tend to vote for Erdogan’s Justice and Development Party in elections.

Erdogan’s apparent failure to deliver on his threats makes him look weak internationally, as a leader whose bark is much worse than his bite.

But Ergil argues that Erdogan's “harsh rhetoric” appeals to his voters. “He is portraying himself as tough,” Ergil said; Erdogan's threats against the Iraqi Kurds were not actually intended for the world, but for internal consumption.