Tunisian social movements like Manich Msamah continue to fight for an authentic democracy in Tunisia as they face off against a controversial law granting amnesty to former regime officials. 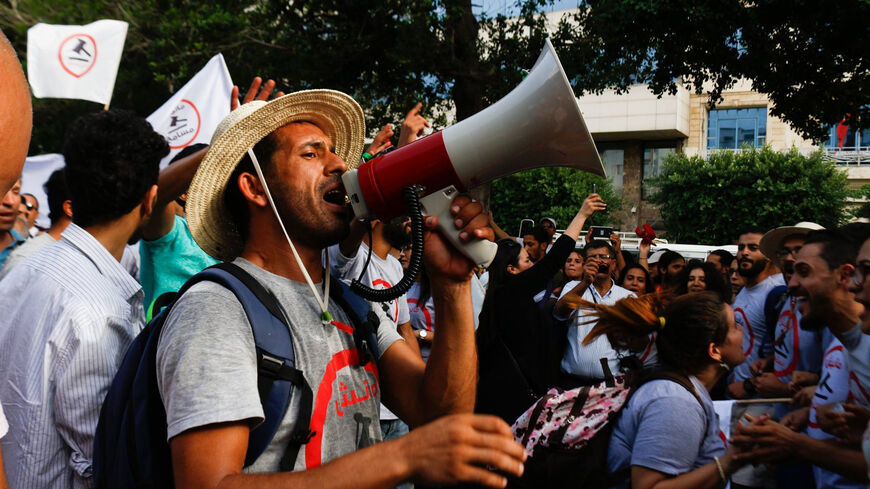 A protester from the group Manich Msamah shouts into a megaphone at a protest, Tunis, Tunisia. Posted Sept. 18, 2017. - Facebook/manichmsame7/Alpha Bakemono

Standing with arms folded and dressed in T-shirts with the “Manich Msamah” (“I don’t forgive”) logo, several members of the collective Manich Msamah attended the press conference at the National Union of Tunisian Journalists on Sept. 15, two days after the so-called Administrative Reconciliation Act was passed by the Assembly of the Representatives of the People (Tunisian parliament).

“At the press conference, we wanted to send a clear message to the government and we want to challenge them: Our fight will not end with the passing of the law,” Aziz Amani, a Tunisian blogger and well-known activist of the 2011 revolution, told Al-Monitor.

He said, “We have posted a picture with the photos and names of the 117 parliament members who voted for the law. And if it will be applied, we will put up photos of all those who will be the beneficiaries of this amnesty law across the streets of Tunis. We cannot forgive the unforgiveable!”

Some 117 members of the 217 members of parliament voted in favor of the controversial law, most of whom were from the Nidaa Tunis and Ennahda parties. Nine voted against it, while the opposition, which considered the bill unconstitutional, boycotted the vote entirely. If applied, it will serve to pardon former dictator Zine El Abidine Ben Ali’s public servants, knowing that it has already been amended twice since its introduction in parliament in 2015. Before the amendments, the law proposed granting amnesty to corrupt businessmen, some of whom are still under investigation. That the law was amended at all can be considered Manich Msamah’s first victory — marking a new trend of Tunisian social movements in the aftermath of the 2011 revolution.

The determination, anger and creativity of this dynamic group, which was founded in 2015, brought them and many of its followers to the streets. The group was formed after President Beji Caid Essebsi announced the project of the Reconciliation Act in order to grant a form of amnesty to corrupt businessmen and officials linked to the Ben Ali regime, and to stimulate, in his opinion, the economy by offering a sort of “reconciliation.”

Chanting ironic slogans, Manich Msamah is always accompanied by Tunisian revolution victims’ family members and those wounded during the uprisings. Their activity remains ongoing. Most recently, on Sept. 16, around 3,000 people from various generations gathered in the central Habib Bourguiba Avenue to protest the law, the government and the presence of local mafias. Manich Msamah has also engaged in a legal battle in Tunisia’s Administrative Court prior to the passing of the law.

“Two elements are really important while monitoring the actual Tunisian political situation beside this law,” Patrizia Mancini, a journalist with the Tunisia in Red blog, told Al-Monitor.

She added, “The daily arrests of young activists all over the country — the last one we know of was in the city of el-Kef — is undermining democracy and rights; as well as the intentions of President Essebsi who recently declared he wishes parliament to modify the constitution, marking that its heterogeneity hinders the action of the government.”

But Tunisia, which remains a fragile democracy, holds even more contradictions. To turn the attention of the international audience away from this amnesty law, the law allowing Tunisian women to marry non-Muslims was approved on Sept. 14 (the day after the Administrative Reconciliation Act was passed). This move followed other recent developments pertaining to women's rights and gender-based violence. After years of campaigning, discussions and investigation, the new law abolished the clause allowing rapists to escape conviction and punishment if they married their victims. Essebsi also called for reform of the inheritance law, which in Tunisia as in other Arab countries does not guarantee gender equality — but nothing happened yet in this regard.

Although these results of long-term feminist battles can be greeted as positive and groundbreaking in North Africa and the Middle East, Tunisian society continues to struggle with the other face of the secular political party in power, Nidaa Tunis. The latter continues to repress the social and economic requests of demonstrators in southern Tunisia, who have always been active, especially in the last few months. Tunisia’s government justifies the different repressive modalities as counterterrorism measures necessary for the security of the country, to prevent attacks and block extremists’ infiltration. Tunisia was hit by several attacks in 2015, conditioning the country’s security and affecting the tourism sector.

“The Tunisian youth in the streets of our country breathe the smell of the Dec. 17-Jan.14 revolution. Young people work together and organize themselves in different social movements, like Manich Msamah,” Kelil said. “The state uses its security machine against all of us and this Administrative Reconciliation law leaves our democracy disfigured. But the democracy is in the streets; after six years, the streets are still making Tunisian democracy,” he concluded.

Tunisian social movements continue to show their resistance fighting for an authentic democracy, not accepting that the 2011 revolution would be compromised and that the lives of the martyrs have gone in vain.