The war in Syria has destroyed many of its ancient mosaics and threatens the craft of making them. 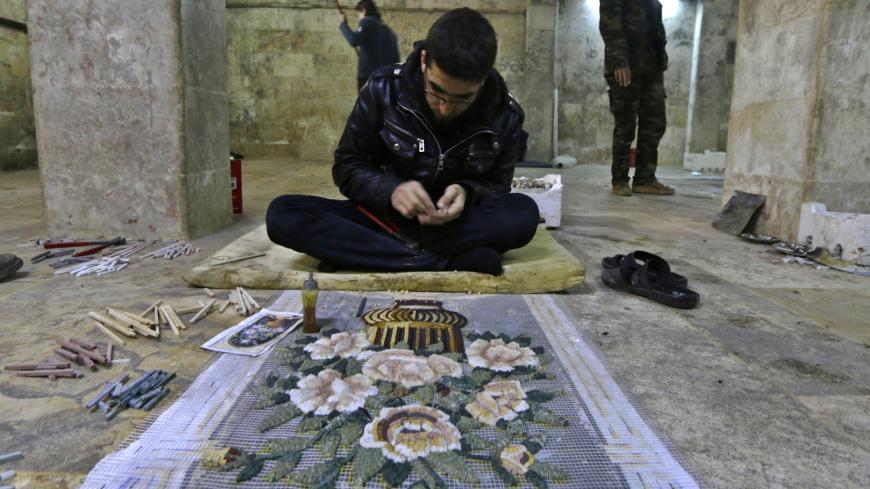 A man works on a mosaic copied from an original in a workshop in Kafranbel, Syria, Jan. 17, 2015. - REUTERS/Khalil Ashawi

Syria is home to some of the oldest mosaics ever found. As far back as 1500 BC, artists in the region have used small pieces of colored stone, glass and shells to create large images of daily life, animals or complex geometric shapes.

After years of war, however, many of the country's ancient mosaics have been destroyed or looted. Contemporary mosaics, the work of Syrian craftsmen who struggle to keep up the craft of their grandfathers, find few if any buyers.

Syria’s Maarrat al-Numan Museum, the largest mosaic museum in the Middle East, contains approximately 2,000 square meters (half an acre) of mosaics, mostly from the late Roman and Byzantine periods. The exhibits, reconstructed on the walls and floors, contain scenes of hunting and everyday life as well as geometric shapes. While the mosaics inside the museum are mostly intact, many external ones were damaged by airstrikes in 2015. Some remaining ones were moved to a warehouse for protection. In the nearby town of Taybat al-Imam, just northwest of Hama, a Byzantine-era mosaic that dates back to A.D. 442 was destroyed by the Syrian army.

If war makes it difficult to protect the mosaics, it's even more difficult to prevent illegal excavations that rob Syria of its unique heritage. Several mosaics, including one portraying a king and queen of Apamea, were dug up in 2012 and sold later in Beirut, according to Syrian mosaic artist Abdul Razak Tawil. Today, the fate of the huge and ancient mosaic is unknown. Interpol is looking for it.

“There are Byzantine and Roman mosaics in the north of Syria. Carrying out illegal excavations and selling the findings on the black market have become common practice for those who enjoy protection from the armed jihadist groups,” Tawil said, adding that he had personally seen the Apamea mosaics when they were first excavated.

The art of mosaic-making itself is at risk, as the present artisans of the ancient craft have also suffered in the conflict. Hamdo al-Bayoush, from the city of Kafr Nabl in Ibdil, has been practicing the art since 1998, and he does not intend to leave the city nor abandon his profession despite the shortage of equipment and demand.

“There are, unfortunately, several obstacles facing this art. Chief among them is the lack of necessary materials such as glue, paint, machines to cut the stones due to the closure of the border with most of the neighboring countries. Also, we are not at liberty to practice this art given the controls imposed by the extremist factions spread in the area. They forbid the depiction of humans or animals. We try to get the Syrian regime to ship some mosaics to Jordan or other countries, but the shipping costs are very high because of the huge payments that we make to checkpoint officers to allow these works to cross the border. That cost can be up to thousands of dollars for just one mosaic,” Bayoush told Al-Monitor over Skype.

“This art is our history, and we will work to preserve it. It is the legacy of the family and the region, and we will pass it on to our children just like our forefathers passed it on to us,” he added.

Tawil also spoke of the difficulties mosaic makers face. “Given the political and economic difficulties, there is no local demand for our work. In our region, many people work in mosaic-making, but there is no demand for these pieces. Also, these pieces are rarely shipped outside the country, and when they are, intermediaries and traders are required. We can no longer make this art available to the world.”

Tawil asked the international community to protect the art that is part of the world's cultural heritage, saying, “We call upon the international community to work for the protection of these ancient images, museums and monuments, which are a legacy of thousands of years attesting to the long history of the region and an art threatened with extinction.”

Osama Mahrouk, an Amman-based Syrian merchant who deals in mosaics, told Al-Monitor, “Mosaics are now largely being exported to Europe, such as Austria and Germany. They are often shipped from Syria to Turkey via the Bab al-Hawa border crossing with Turkey, and then shipped via DHL or other shipping companies. I have also sent many works to Canada. Prices have dramatically increased because of the collapse of the Syrian currency and the rising production costs. Craftsmen also try to market mosaics on social networking sites and mosaic websites. There used to be at least 100 pieces sold abroad a year, but there is no such demand for mosaics anymore.”

As a large number of Syrians fled the country, they took some of their crafts with them in an attempt to preserve their heritage and art. Mosaic is no exception.