As the number of disappeared has reached more than 75,000 people in Syria, Amnesty International launched a campaign urging the Syrian authorities and armed groups to reveal their fate. 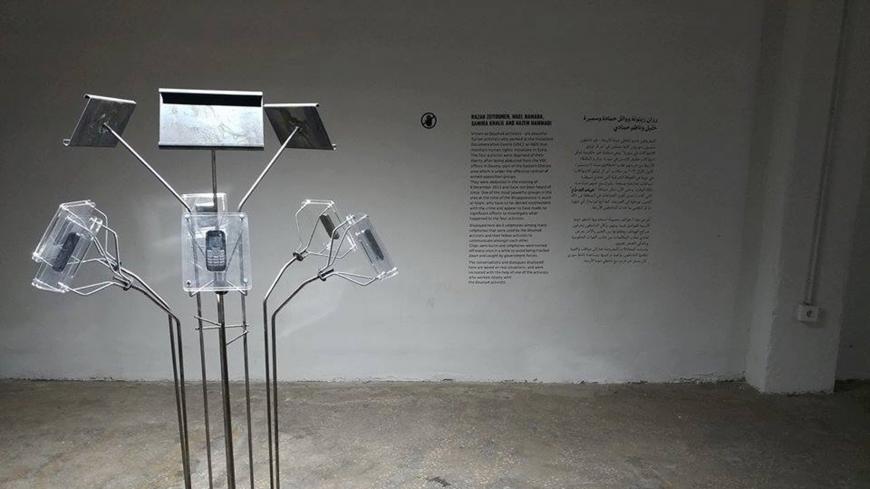 One of the exhibits that shows cellphones used by Syrian activists in Douma, Damascus, prior to their abduction by an armed opposition group, Beirut, Lebanon. Posted Sep. 5, 2017. - Facebook/AmnestyArabic

BEIRUT — More than 75,000 people have disappeared in Syria since 2011, according to the Syrian Network for Human Rights (SNHR). Amnesty International started a campaign on Aug. 30, the International Day of the Disappeared, with the aim to push the authorities and armed groups to reveal the status of the disappeared to their families. The human rights group organized a weeklong exhibition at cultural space Station Beirut to remember Syria's missing and disappeared.

“Copper wires / my blood / has turned / by their generous servings of electric shocks / and yet despite that / I see you / here,” wrote Syrian poet Aref Hamza after he was released from a Syrian prison. His words describe the cruelty of life in detention. Since the start of the conflict in 2011, thousands have been detained in Syrian regime jails, held by armed groups or abducted. Many will never be heard from again.

Amnesty International has been documenting the disappeared in Syria from before the war. “But since 2011, many more people have disappeared, and it is now a priority issue for us,” Leen Hashem, the regional campaigner on Syria for Amnesty International, told Al-Monitor. “It is a real human issue that cannot be buried under political negotiations.”

Through an online campaign, the organization is “calling out the Syrian government and armed groups to disclose the fate of the disappeared, as well as the international community such as Russia and the United States to push their allies to answers,” Hashem said. “So far, no one replied, but we will keep insisting for the families who have the very righteous demand of knowing what happened to their loved ones. In the meantime, we support them and we don’t lose hope.”

Amnesty International organized this campaign in collaboration with Families for Freedom, a US human rights organization whose representative on the Syrian disappeared, Fadwa Mahmoud, had a son and husband taken by the regime Air Force Intelligence in September 2012. She has not heard from them since then. “I tried to be involved in political groups to push forward this issue, but it was in vain,” Mahmoud told Al-Monitor. “As I needed to speak up, I took part in Families for Freedom. It is not only for me or for my son — it is for everyone feeling like me today.”

These disappearances go against the Syrian Constitution and the International Convention for the Protection of All Persons from Enforced Disappearance.

In October 2013, Human Rights Watch reported that those missing are mainly journalists, doctors, activists and humanitarian workers. Four activists — Razan Zeitouneh, her husband Wael Hamada, Samira Khalil and Hazem Hammadi — who worked at the Violations Documentation Center, a nongovernmental organization monitoring human rights violations in Syria, have not been heard from since their disappearance in 2013.

“They were not dangerous, but their disappearance puts pressure on all the other activists,” Diala Brisly, a Syrian artist now living in Germany, told Al-Monitor. “The regime can use kidnapping to get names by torture, or just to set an example. Some die during torture, others are released, others we don't hear from again. Now what is new is that they kidnap people to get money from their families. This happened to my sister; the regime took her husband and after a few weeks she was approached to give money in exchange for him. She didn’t have any money and ended up being threatened, so she had to hide in Lebanon for a few months. Her husband ended up coming back alive. But it works. They used to be activists and now they stopped everything — they keep very quiet.”

Brisly said that some of her friends had been kidnapped by the Islamic State. She said that Samar and Mohammad, who worked as childhood educators, were kidnapped three years ago. “These groups just want to brainwash people,” Brisly said. “So activity enlightening the population — such as journalism, education or medicine — is seen as a threat.”

Many organizations, associations and individuals are making sure those who disappeared in Syria over the last few years will not be forgotten. Amnesty International uses the internet to tell the stories of some of the disappeared, showing their pictures, names, affiliation and when and where they were last seen.