As Russia beefs up its offensive in Syria, the situation there looks promising, but it’s time for Moscow and Washington to cooperate in a final push to eliminate the Islamic State. 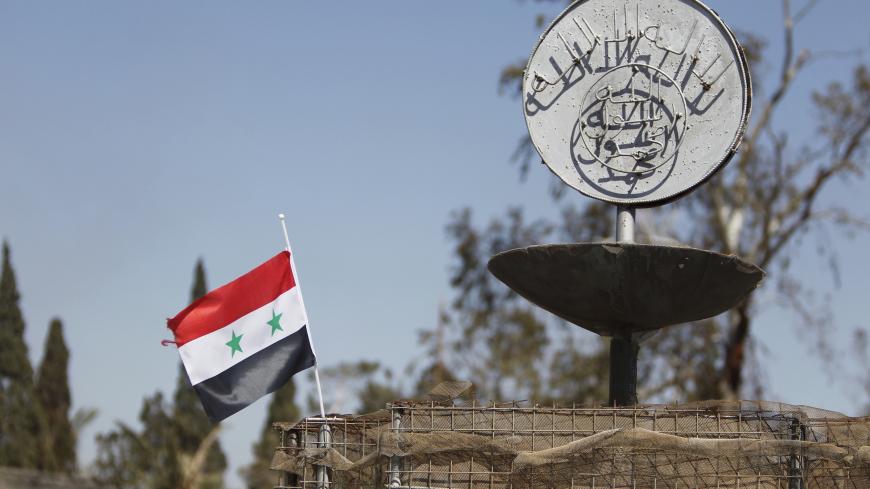 A Syrian national flag flutters next to the Islamic State's slogan at a roundabout where executions were carried out by militants in the city of Palmyra, in Homs province, Syria, April 1, 2016. - REUTERS/Omar Sanadiki

MOSCOW — Over the past few weeks, Russia has increased its air offensive to support the Syrian army's advance against the Islamic State (IS) in Deir ez-Zor. Russia’s Defense Ministry even proclaimed that the civil war in Syria is “practically over.”

Terrorists have been separated from the opposition, and de-escalation zones have been established. Moscow largely credits itself for both developments, which enable Russia to pursue its Syria campaign on two paths: diplomacy with the regime’s opposition at talks in Geneva and Astana, Kazakhstan, and more airstrikes on IS. That doesn’t necessarily mean Moscow won’t occasionally take aim at the US-backed opposition forces if it feels the Syrian army could use some help. But the recent offensive on IS has been remarkable from military and political perspectives.

These are the remarkable military aspects. On Sept. 8, the Russian Defense Ministry announced it had killed 40 IS militants, including four influential commanders. Among them were Gulmurod Khalimov, known as the IS “minister of war,” and Abu Muhammad al-Shimali, the “sharif of Deir ez-Zor.”

In a rare revelation for the Russian military, the Defense Ministry said it had received information about a coming gathering of IS warlords, who were allegedly there to discuss “urgent response measures” to the Syrian army’s advances on Deir ez-Zor. Russia's Kommersant newspaper, referring to its own sources, said Iranian intelligence confirmed the information before the Russian military commanded a Khmeimim-stationed Su-34 fighter bomber and Su-35C fighter to “launch a pinpoint strike” with BETAB-500 bunker-busting bombs. According to the ministry, the airstrike destroyed an underground terrorist command post and a communications center, along with the 40 IS members.

For Russia, killing the IS “minister of war” has a special meaning.

A Tajikistan native, Khalimov had been a member of his country’s special police force (Spetsnaz) and completed its professional training course in Moscow. Later, according to the Russian media, he undertook five US State Department-sponsored counterterrorism courses designed for Tajikistan. Khalimov reached the rank of colonel and then was promoted to head his country’s special police force.

The news that Khalimov ended up in IS in 2015 was shocking. Never before had a high-ranking member of the security establishment from a post-Soviet state willingly joined IS. Soon Khalimov became a member of the IS Sharia Council. In August 2016, the United States designated Khalimov an IS leader and offered a $3 million bounty for his “location, arrest and/or conviction.”

In other words, he was a high-value target for both Moscow and Washington.

First, despite their differing interests in Syria, Russian and Iranian military intelligence maintain interaction. A Russian reporter stationed in Syria who spoke with Al-Monitor on condition of anonymity was concise in his observation of the issue: “Moscow and Tehran may not always see different [Syrian] opposition groups in the same way, but when they pool efforts in tackling [IS], it bears some good fruit.”

Second, following the airstrikes on IS commanders, there were reports — unconfirmed by the Russian military — that Moscow tested the most powerful non-nuclear bomb in the world. The Aviation Thermobaric Bomb of Increased Power, nicknamed the "Father of All Bombs," is a complicated creature designed — and now allegedly used — to destroy bunkers and an array of other enclosed spaces. Military experts place it in the same class as the 11-ton American GBU-43/B — the “Mother of All Bombs" used in Afghanistan in April. If Russia did drop the bomb for the first time in combat, not only was it meant to test characteristics and destructive potential, Russia also wanted to showcase the country’s technological advancement or parity with the United States in this area.

Looking at these events as “US-Russia competition” is a bit one-dimensional — though it doesn’t matter much, as long as it gets the job done.

Third, taking down top military commanders has long been deemed a sign of effectiveness and efficiency of a military operation. In May, the United States announced it had killed three IS warlords in Syria. In June, Moscow claimed it had eliminated IS leader Abu Bakr al-Baghdadi, though the US military later said that wasn't the case. In July, the Pentagon said Abu Sayed, the leader of IS-Khorasan (the IS affiliate in Afghanistan), had been slain in a US strike. Now Moscow claims it killed the top IS military commander. Looking at these events as “US-Russia competition” is a bit one-dimensional — though it doesn’t matter much, as long as it gets the job done.

We shouldn’t discount the public perception of this “competition” in the age of media and optics. Eliminating top terrorists may help little in the immediate operational sense, as IS has become a self-sustainable kraken that can replace killed militants without much detriment to its ground performance. Both Russian and American military commands seem to be well aware of this and do not pin their respective strategies on taking down IS leadership. But such operations are an important element in political posturing both inside and outside the Middle East, and from this perspective, both sides will continue these eliminations and continue to promote them.

The key takeaway from Khalimov’s death, however, is that he in many respects combined the mastery of best special-force practices from both Russians and Americans. He is a reminder that there are still extremist fighters — and a lot more “mere sympathizers” — across Eurasia and the Middle East who, long before joining terrorist groups, either underwent mandatory military service in the Soviet army or enhanced military trainings and later had their skills honed under US-sponsored programs for national security institutions. Such instances can be encountered in Iraq, Afghanistan and some post-Soviet states of the Caucasus and Central Asia. There aren’t many of them, as the majority of IS militants are relatively young and do not have this experience. But those who do have this “cross-schooling” are most challenging.

So while it’s important to take out the high-value targets, Russia and the United States need to worry less about their competition and keep their eyes on the big picture. If they don’t pool their efforts during this final stage, IS could wind up being the winner.