Who wins in war over ultra-Orthodox army draft? 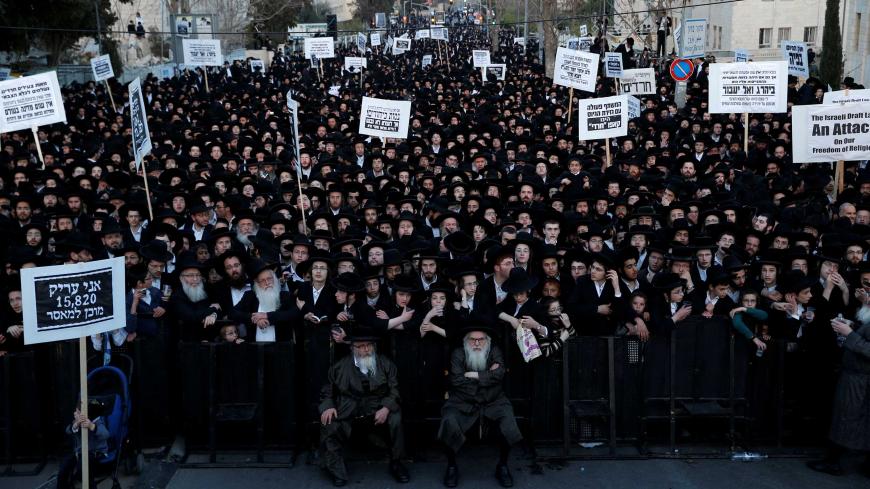 Ultra-Orthodox Jewish protesters take part in a demonstration against members of their community serving in the Israeli army, Jerusalem, March 28, 2017. - REUTERS/Baz Ratner

Supreme Court justices claim that their Sept. 12 decision to overturn the amendment to the Recruitment law, passed by this government in 2015, was intended to force new legislation that would treat Israeli citizens more equitably. In fact, according to the Israel Defense Forces' (IDF) assessment, it will actually hinder the dramatic growth in the number of ultra-Orthodox men who enlist. The reason is that the increase in drafting numbers stems from understandings between the army and the ultra-Orthodox leaders, which are based on a conciliatory mood within the ultra-Orthodox sector (as the law no longer forces them to draft). The new ruling revives the sense of persecution within the sector, strengthening the extremists who object to integration into Israeli society in general, and an army draft in particular.

A panel of nine judges ruled 8-1 that the Knesset must repeal the amendment within a year. The amendment allows yeshiva students to extend their exemption up to 2023, effectively releasing them from compulsory military duty. According to the justices, the amendment was unconstitutional. Justice Elyakim Rubinstein wrote, "Military service in the Israel Defense Forces is exactly what the name implies. It is a defense force, defending all of us, and not some default choice for people forced into it by the powers that be. As long as the current saga continues, laws will come and go, while the bitter feeling of inequality continues."

Obviously, the ruling elicited harsh responses from ultra-Orthodox representatives. Health Minister Yaakov Litzman accused the Supreme Court of trying to bring down the government and said that it has become necessary to pass legislation to limit the court's power. Deputy Minister Meir Porush compared the Supreme Court's ruling to nothing less than a military putsch.

Ultra-Orthodox politicians are now planning to respond on two fronts: They plan to come up with a new amendment to the Recruitment law, which would prevent forcing the ultra-Orthodox to enlist, but which would still be ruled acceptable by the Supreme Court, and they plan to pass legislation that would limit the power of the Supreme Court to overturn Knesset legislation. While Defense Minister Avigdor Liberman is expected to oppose the proposed amendment, he will throw all his political weight into supporting the legislation to limit the court's power. One day after the ruling, Liberman said that while he supports the recruitment of ultra-Orthodox men, the way that the Supreme Court is ruling on issues that are not of its concern is absurd, and the Basic Laws determining the scope of its authority should be re-examined.

Opposing this is Finance Minister Moshe Kahlon of Kulanu. Kahlon said last year that he would avoid doing anything to harm the Supreme Court, but that was before he suffered a severe blow from its justices, when they overruled the Third Apartment Tax law, which he initiated and got passed by the Knesset.

Netanyahu will now have to find a solution that is acceptable to all factions in his coalition.

Meanwhile, the IDF is worried about the immediate implications of the ruling. Given the increase in the number of ultra-Orthodox recruits over the last few years and their special religious requirements, the IDF plans to create a new ultra-Orthodox battalion, in addition to the Netzah Yehuda Battalion of the Kfir Brigade, and to increase the number of places available in the ultra-Orthodox frameworks of the Givati and Paratroopers brigades. At the same time, a senior military source involved in the issue told Al-Monitor that there is some concern that the trend will be hindered.

Figures communicated to Al-Monitor from the Manpower Division of the General Staff show that in the past three years, the number of ultra-Orthodox recruits rose by 12-13% per year, with 2,800 young men enlisting in 2016. According to that same military source, the IDF's expectation for 2017 was 3,200 new recruits.

Between 1997 and 2007, only 1,500 ultra-Orthodox men enlisted, compared to 16,500 in the last decade. In other words, there were 11 times more recruits in the past 10 years. The Manpower Division also said there are currently 7,000 ultra-Orthodox soldiers serving in the IDF, many of them in combat divisions like the Paratroopers, Givati and the Netzah Yehuda Battalion. Some 400 of them are career soldiers, mainly in technological posts.

There is, of course, also the economic aspect. Figures published by researcher Asaf Malchi of the Israel Democracy Institute show that almost 90% of ultra-Orthodox recruits to the IDF were integrated into the job market upon their release from the army. A decline in the number of recruits would therefore lead to a decline in their employment rates.

Almost all parties involved in the issue share the IDF's concern that this positive trend in ultra-Orthodox enlistment could grind to a halt. Deputy Defense Minister Eli Ben Dahan told Al-Monitor that the Supreme Court should have given the Recruitment law time to prove itself and show that it is instigating positive change within the ultra-Orthodox community and in sharing the drafting burden. He said that the ruling is a serious blow to the process by which the ultra-Orthodox have integrated into Israeli society over the past few years, and that the judges ignored the dramatic shift among the ultra-Orthodox in favor of the IDF. If in the past it was impossible to obtain permission from the rabbis to enlist, the amendment that was just overturned by the Supreme Court showed that ultra-Orthodox politicians and rabbis do accept in principle the idea of enlistment.

Past experience shows that court rulings and decisions of this kind, which are seen by the ultra-Orthodox community as threatening forced enlistment, have a negative impact on recruitment figures. For instance, with the repeal of the Tal law in 2012, which allowed full-time yeshiva students to defer national service, the percentage of ultra-Orthodox men enlisting in the IDF plummeted from 28% to just 14%. In 2014, with the passing of the Sharing the Burden law initiated by Yesh Atid, which is perceived as an enemy of the ultra-Orthodox sector, the annual growth rate dropped again, from 35% to just 12%.

Gilad Malach of the Israel Democracy Institute agrees with the assessment that the recent Supreme Court ruling will have a similar impact, at least in the short term. He told Al-Monitor that another attempt to introduce criminal sanctions against yeshiva students refusing to enlist — like the law passed by Yesh Atid, which was replaced after the 2015 election with the amendment that was just overturned — would be detrimental to the recruitment of yeshiva students. He noted that the focus should be on linking the number of students enlisting in the army to the budgets that the state grants to the yeshivas.

Rabbi Moshe Ravad, a former chief rabbi of the Israeli air force and one of the people behind the Shahar technology track for ultra-Orthodox recruits, told Al-Monitor that until 10 years ago, no one would have believed that thousands of young ultra-Orthodox men would enlist every year. The secret, he said, is dialogue between the military leadership and the rabbis, especially the quiet kind of dialogue, which indeed resulted in an increase in the number of ultra-Orthodox recruits. Ravad warned that the Supreme Court ruling, on the other hand, would increase opposition to the IDF among the ultra-Orthodox public and potentially even to a worsening of attacks targeting ultra-Orthodox men who do enlist.

Even if it was the right decision, legally and constitutionally, the Supreme Court's ruling could actually help those forces opposed to the integration of the ultra-Orthodox into society. The numbers prove that dialogue and cooperation with the ultra-Orthodox leadership on the drafting issue leads to an increase in the number of yeshiva students who serve in the IDF. Furthermore, the decision could result in ultra-Orthodox community activists playing a more active role in the fight by certain forces in the Knesset to limit the authority of the Supreme Court.