While politicians and diplomats rethink their strategies, the ongoing Israeli-Palestinian conflict perpetuates pollution of air and water in the region. 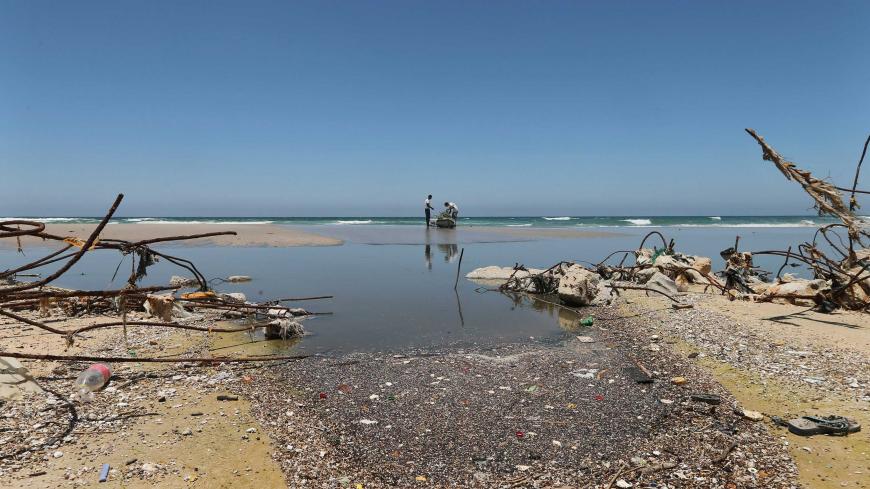 Palestinian fishermen prepare their boat on a beach in front of polluted water in the central Gaza Strip, June 26, 2014. - REUTERS/Mohammed Salem

As an observant Jew, US President Donald Trump’s envoy, Jason Greenblatt, undoubtedly knows the term “Days of Awe” used in Jewish tradition to describe the 10 days between the Jewish new year, Rosh Hashana and the holiest day on the Jewish calendar, Yom Kippur, the Day of Atonement. Greenblatt will likely remember his visit to Israel with his family Sept. 27 for these holidays as especially awful. The Sept. 26 terror attack in the Israeli border settlement of Har Adar, in which three Israelis were killed, along with the Sept. 27 celebrations marking half a century of Israeli occupation of the West Bank, mark awful times for all peace lovers. Few — if any Israelis or Palestinians — seriously believe the promise made Sept. 20 by Trump to Palestinian President Mahmoud Abbas in New York that he is about to unveil a deal that provides the Palestinians with an independent state.

If Greenblatt does not know the Talmudic phrase "If you have seized a lot, you have not seized" (Yoma, Chapter 8), which loosely translated means “Biting off more than you can chew," he would do well to talk to Dennis Ross, who spent much of his professional life in futile efforts to bring about an end to the Israeli-Palestinian conflict. Ross led Middle East negotiations for both the Bush and Clinton administrations, and bears significant responsibility for bungling the peace overture offered by the Israeli-Palestinian 1993 Oslo Accord. As a service to Greenblatt and his team, following are words I heard from Ross at a Sept. 14 conference  in the Arava Institute for Environmental Studies at the Negev Desert kibbutz of Ketura.

“My biggest mistake,” Ross told participants, “was in imposing the approach that said that nothing is agreed until everything is agreed. For example, if the sides reached agreement on construction in certain settlement blocs in return for alternative land within Israel proper but negotiations were suspended due to a dispute over Palestinian refugees, then whatever was agreed concerning the settlements was null and void." Ross said, by the way, that such an understanding on land swaps was reached in a clandestine channel between the sides conducted in Sweden.

“Each time we tried to resolve core issues, we got nowhere,” Ross recounted. “The vacuum was quickly filled with the most negative elements. If you don’t peddle, you fall off the bike; when you don’t talk, terror talks.” In hindsight, he said, they should have agreed that each issue would be implemented once it was agreed by both sides, regardless of agreements on other issues. “That would have changed the reality on the ground and created positive momentum in the relationships between the sides,” he added.

What’s to be done now that a binational, apartheid state is becoming a distinct possibility as a result of the settlement enterprise? How does one ensure that the negative momentum will not drag both peoples down into an abyss, kicking and screaming as they hold each other by the throat? The vision of an “economic peace,” which would boost cooperation between the sides and result in economic growth and an end to the conflict, came crashing down on the walls of the occupation and messianic settler fervor. The paradigm of “confidence-building measures,” according to which mutual goodwill gestures would promote fruitful dialogue, has run aground on Israeli settlements and Palestinian terror. Most Israelis and Palestinians opted for the worst option of them all — to sit home and carp, or to go to their synagogues and pray for a miracle.

At the conference in Ketura, I met Israelis, Palestinians and Jordanians who traveled all the way there to promote initiatives that would ensure clean air and water for their children. Because even if they cannot by themselves end the bloody conflict, they still want their children to breathe pure air and drink clean water.

Similarly, David Lehrer, the director of the Arava Institute for Environmental Studies that promotes cross-border environmental cooperation, said, “The environment cannot wait for a future peace agreement that may come one day. The environmental problems are hurting us now — both us Israelis and our Palestinian and Jordanian neighbors. Only by working together will we be able to protect the environment, public health, clean water and pure air. We owe it to ourselves and to future generations.”

Shaddad Attili, who served as the chairman of the Palestinian Water Authority, took the stage at the conference to cry out that the beleaguered Palestinians living in the Gaza Strip “don’t need two states; they need water, air, food.” For the benefit of the many Israelis who don’t care about the price being paid by the children of Gaza for Israel’s decadelong siege, following is a brief excerpt from the May 2017 report issued by Israel’s State Comptroller: “The water pollution in the Gaza Strip, part of the water crisis afflicting Gaza, has health and environmental implications that do not stop at the border between Gaza and Israel. This crisis pollutes the water and beaches, rivers, reservoirs and aquifers, as well as poses a threat of infectious disease."

The comptroller went on to note that in 2016, the water desalination plant on the beach of the southern town of Ashkelon near the Gaza border was temporarily shut down twice due to severe organic contamination of the sea water, which, according to the plant’s operators, likely originated from the Gaza Strip.

At a July 5 debate by the Knesset’s Internal Affairs and Environment Committee, Dafna Zeira of the Health Ministry reported that on that very day the ministry had closed off the Zikim beach south of Ashkelon due to fecal contamination originating from Gaza. The polluted seawater also reached the beach of the Ashkelon National Park further north. Gideon Bromberg of Friends of the Earth warned then, “We will be helpless if hundreds of thousands of Gazans head for the border [with Israel] for fear of an epidemic.”

It turns out that the air breathed by Israelis and Palestinians does not recognize borders, either, skipping over walls and roadblocks. Hundreds of slow burning charcoal production plants scattered throughout the Samaria region of the West Bank, under control of the Palestinian Authority, spew out heavy smoke that creates an ongoing health and environmental hazard for the population in the region, regardless of religion and nationality. The wood for the charcoal manufacturing is supplied by Israeli farmers, and the end product is used by masses of Israelis to fire up their barbecues.

Israeli authorities have been conducting a losing battle against these charcoal manufacturing enterprises, a source of income for thousands of Palestinians even as they damage their lungs with black soot. Israeli-Palestinian cooperation has yielded a practical solution to the problem, for the benefit of all sides. The so-called green ovens initiative presented at the Ketura conference by the Arava Institute would enable the Palestinian charcoal industry to keep growing without negative environmental impact and also increase production capacity.

Israelis and Palestinians may not be able to end their conflict, but if they want their children to drink pure water and to breathe clean air, they should not wait passively for an initiative by Trump and his envoys. Unfortunately, peace will probably have to wait for less awful days. Cooperation among neighboring residents for the sake of environmental quality is a pressing need, and that is by no means a cliche.