As the date for an independence referendum scheduled by the Kurdistan Region of Iraq approaches, the United States increases pressure on the Kurdish parties to postpone the referendum. 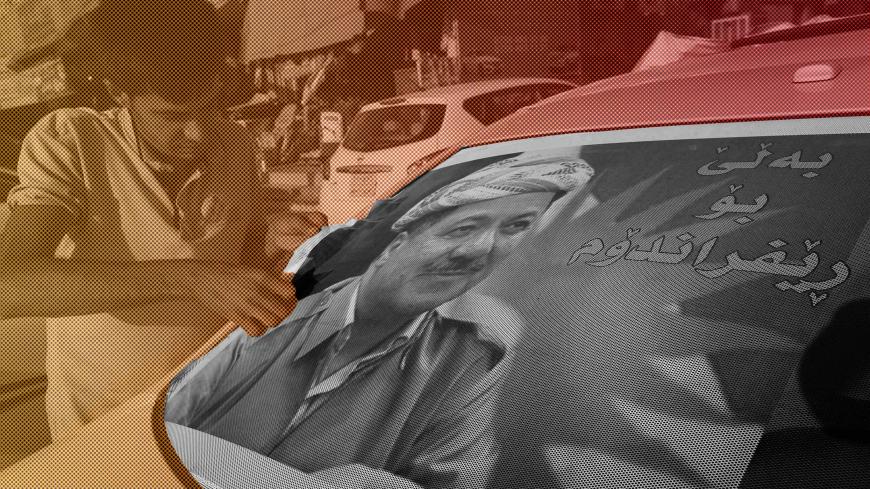 An Iraqi Kurdish man decorates a car with a poster bearing the image of Iraqi Kurdish leader Massoud Barzani and urging others to vote in the upcoming independence referendum, Erbil, Iraqi Kurdistan, Aug. 30, 2017. - SAFIN HAMED/AFP/Getty Images

The United States has been trying to prevent the Kurdistan Regional Government (KRG) from holding a referendum on its independence, with Washington using its substantial support to the peshmerga forces as leverage against the KRG to stop the plebiscite scheduled for late this month. However, the strong alliance between the two sides will likely prevent any further escalation during this period.

Pentagon spokesman Eric Pahon told TV channel Al-Hurra Aug. 17 that the United States intended to suspend financial aid to the KRG peshmerga forces. Quoting the US Defense Department, Al-Hurra reported, "Hundreds of millions of dollars have been handed over to the Peshmerga Ministry since 2014 in batches. The Pentagon will no longer provide funds to the Ministry of Peshmerga."

High-level sources in the US Defense Department, who spoke on condition of anonymity, said that these threats to suspend aid were a direct result of the announced referendum on the independence of the Kurdistan Region scheduled to be held on Sept. 25.

The United States has contributed to the restructuring and modernization of the Kurdish peshmerga forces in recent years and has helped them at the level of arming and training, as well as paying part of their salaries.

The United States could use the aid card as leverage against the Kurdish parties that are in dire need of such support, especially in light of the severe financial crisis that has plagued the Kurdistan Region since 2014. In June, the US Congress threatened to cut off funds to peshmerga forces should the KRG carry on with the referendum process.

Things did not stop at this point. On Aug. 22, US Secretary of Defense James Mattis visited the Kurdistan Region to reiterate his country’s dissatisfaction with the referendum. In his meeting with Kurdistan Region President Massoud Barzani, Mattis said the announcement of the referendum last June was "not expected," according to a statement by the region’s presidency.

Peshmerga Secretary-General Jabbar Yawar denied reports on the US aid cut to the KRG. “There is no indication that the United States is going to cut its aid to the peshmerga forces," Yawar said in an Aug. 17 statement. He added that the US administration "continues to provide the peshmerga with weapons, experts and trainers, in their war against terror.”

Previously, US Ambassador to Iraq Douglas Silliman had confirmed during his meeting with Barzani on July 28 that US aid to the peshmerga forces would continue.

This confusion is due to the fact that the Kurdish forces are considered to be one of America's most important allies in its war against the Islamic State (IS). Despite the desire of the United States to postpone the issue of independence, at least for the time being, it does not want to give up this important ally in the region.

"Both sides have leverage, but the United States, with its superior capabilities and resources, has more. It already cut military cooperation to the KRG briefly last spring, when the KDP [Kurdistan Democratic Party] blocked US military assistance to the YPG [People's Protection Units] in northern Syria. Within less than two days and after hurried high-level meetings, the KDP reversed course," Joost Hiltermann, the MENA program director for the International Crisis Group, told Al-Monitor.

Hiltermann added, “But the United States will have to use this leverage judiciously as it cannot afford to lose the KRG/KDP as an ally either."

The United States is well aware that the independence of the Kurdistan Region will open the door to conflicts between the region and the central government in Baghdad, providing an opportunity for armed groups to be active in the stateless areas caused by these conflicts. In the past, IS and al-Qaeda took advantage of the security vacuum in the disputed areas to move there more freely.

On the other hand, the Kurdistan Region banks on its strategic alliance with the United States, not only in the face of jihadi armed groups but against Iranian expansion. The KRG has become increasingly important as a US military ally under President Donald Trump's policy of curbing Iranian influence in the region.

Ranj Alaaldin, a visiting fellow at the Brookings Institution, told Al-Monitor, "Withdrawing military support for the Kurds damages the broader anti-[IS] coalition, while also emboldening America’s enemies. This would make little sense at a time when the current administration is keen to ramp up pressure on Iran and its proxies."

He added, "If anything, the current administration seems reluctant to repeat the mistakes of the past that saw Iran fill the gap left by the United States after it withdrew from Iraq."

Moreover, the United States does not favor changing the maps of countries in the Middle East as this poses a threat to the political order in the region.

“It has been a consistent US policy not to support any change to the post-WWI borders in the Middle East. The United States — and most other states — believe that if you change one border, you open a Pandora's box,” Hiltermann said.

It seems that the lack of enthusiasm to support the independence of regions within countries is not limited to the Middle East. Many countries around the world face demands from some regions for independence, leading to their reluctance to support any independence projects, as that may establish a precedent that threatens their territorial integrity.

The United States will continue to leverage against the holding of the KRG referendum, despite the KDP’s insistence on conducting it. However, both sides are likely to maintain good relations because of their strong alliance and given the fact that independence is not guaranteed immediately after the holding of such referendum.