While Iran and the United States are presenting clashing narratives of who organized the meeting in New York on Sept. 20, the session presents a golden opportunity for de-escalation between the two sides. 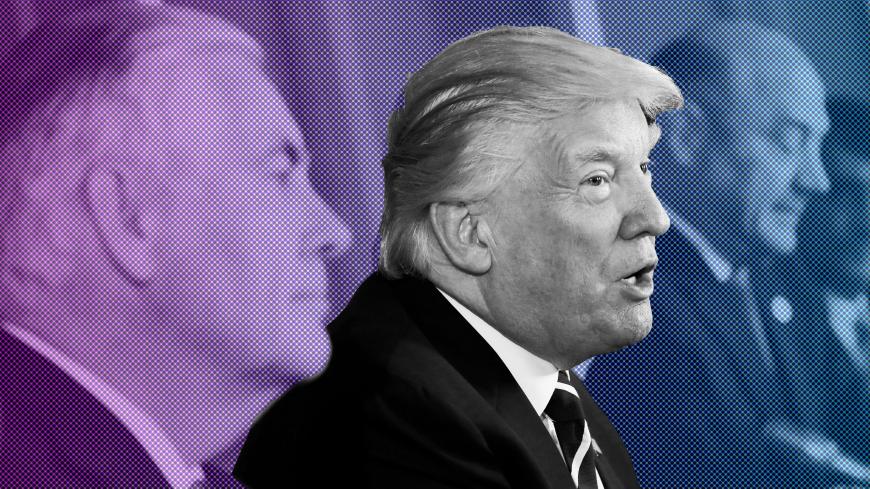 US President Donald Trump talks beside Secretary of State Rex Tillerson during their meeting with Belgian Prime Minister Charles Michel in Brussels, Belgium, May 24, 2017. - REUTERS/Jonathan Ernst

After months of escalating hostile rhetoric about the 2015 Joint Comprehensive Plan of Action (JCPOA), US Secretary of State Rex Tillerson is set to sit down next week for his first face-to-face encounter with Mohammad Javad Zarif, his Iranian counterpart. The two sides will meet in New York Sept. 20 at a ministerial-level meeting of the Joint Commission, the body established by the nuclear deal to resolve disputes among its signatories.

The Trump administration’s hawkish tack has predictably prompted a defiant Iranian response, albeit limited by President Hassan Rouhani’s pledge that Iran won’t be the first to violate the deal. But beyond the general irritation Iran has with the US rhetoric, Tillerson in particular has ruffled feathers in Tehran.

In June, Tillerson provoked outrage when he indicated to the House Foreign Affairs Committee that the United States has reverted to a policy of regime change, saying, “Our policy toward Iran is … to work toward support of those elements inside of Iran that would lead to a peaceful transition of that government.” More recently, on Sept. 14, Tillerson told reporters that Iran is “clearly in default” of “expectations” of the nuclear deal.

Yet Tillerson has publicly stated that he has “differences of views on things like [the] JCPOA” with President Donald Trump, while also asserting back in May that “in all likelihood,” he and Zarif “will talk at the right time.”

With Sept. 20 around the corner, Washington now appears to be putting out the message that the upcoming Zarif-Tillerson encounter is an initiative of the US State Department. On Sept. 13, citing a senior State Department official, Bloomberg reported that the United States has “asked foreign ministers of nations that agreed to the [nuclear] deal to meet on the sidelines of the annual United Nations General Assembly debate in New York next week to discuss the agreement’s flaws.” But this narrative of events clashes with previous reports about Iran and Russia calling the meeting.

Speaking to Al-Monitor on condition of anonymity, a senior Iranian source dismissed the idea of Tillerson’s State Department having requested the Sept. 20 session, saying, “The meeting was initially requested by Iran to address its grievances about US violations. Not vice versa.” The source continued, “The decision [to request the session] was tentatively made during the last Joint Commission meeting in Vienna.” Of note, the Joint Commission met at the deputies’ level in the Austrian capital in late July, the second time it has convened since Trump took office.

Further disputing the State Department’s account of events, the Iranian source said, “The US did not confirm its participation [in the Sept. 20 session] until Tuesday or Wednesday.”

While the question of who really called the session may appear to be a banal tangent, there are important reasons for the spin, given its impact. Domestic politics — greatly driven by constituencies variably incensed by decades of mutual animosity — shapes both the run-up, conduct and aftermath of the Sept. 20 meeting. Under Trump, this strikingly applies to both Iran and the United States. As such, each side’s claim to have dragged the other to the Sept. 20 meeting is in fact a good thing.

The session carries great symbolic value on account of being the first time that the top US and Iranian diplomats will meet face to face. While Zarif and former Secretary of State John Kerry’s encounters during the 2013-15 nuclear negotiations became so frequent that they ceased to make headlines, US-Iran ministerial-level meetings have effectively become a reconstituted taboo over the course of 2017.

Moreover, and perhaps more importantly, the Sept. 20 meeting provides a golden opportunity for both Iran and the United States to exit, or at least decelerate, the cycle of escalating rhetoric in a face-saving manner. But how?

At a time when the dynamic between domestic politics and foreign policy is mirrored in Tehran and Washington, the session allows Trump to do the one thing he appears to cherish the most: tell his base that he has done something President Barack Obama never did, namely to drag Iran before the Joint Commission over its “violations.” On the other hand, rather than be weakened by such rhetoric, the Rouhani administration can also claim victory at home by arguing that its “constructive engagement” has broken the past international consensus against Iran. In this vein, instead of coming under attack for having called — or been summoned — to the Sept. 20 session, the odds are that the Iranian discourse will note why Tillerson is unlikely to call a Joint Commission vote on Iran’s “violation” of the JCPOA.

Failure to seize this opportunity for a “win” to sell at home — by both Iran and the United States — would be a missed chance to shift the respective public discourse, especially given the approaching Oct. 15 deadline for Trump to certify Iran’s compliance with the JCPOA and the conclusion of the outcome of Washington’s broader Iran policy review.

The nuclear deal was made possible by a unique confluence of factors, including the mutual decision by its signatories to abandon the zero-sum mindset in favor of win-win solutions. Similarly, compliance with the landmark accord can only be assured through the prompt utilization of opportunities for de-escalation in which there are only winners. In other words, just as Iranian submission to tougher restrictions in the face of heightened pressure is unlikely, the United States is equally improbable to be isolated into compliance with its commitments under the JCPOA. Only cognizance of the need for face-saving solutions, no matter which party has “fairness” on its side, can facilitate the transformation of the JCPOA from a burden to an opportunity.