Senior Iranian diplomat: US is serious about killing nuclear deal

The head of Iran’s Strategic Council on Foreign Relations warns that the US administration is serious in its efforts to kill the nuclear deal. 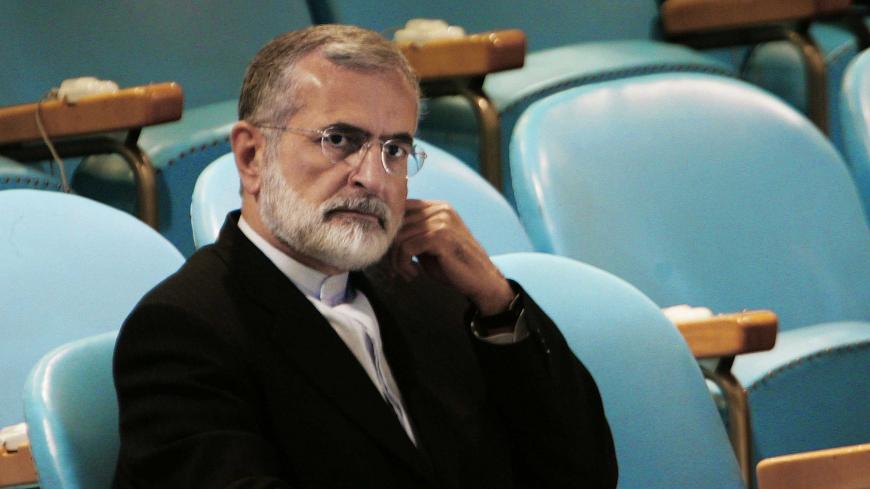 Kamal Kharrazi, foreign minister of Iran, waits to speak at the United Nations in New York, May 3, 2005. - Chris Hondros/Getty Images

Kamal Kharrazi, the head of Iran’s Strategic Council on Foreign Relations, says the US government is serious about damaging the nuclear deal. In an interview with the semi-official ISNA news agency, Kharrazi, who served as foreign minister under Reformist President Mohammad Khatami (1997-2005), said Sept. 12 that the Europeans would resist the US government’s attempts to kill the Joint Comprehensive Plan of Action (JCPOA), which was reached between Iran and the P5+1 countries (United States, France, United Kingdom, China, Russia and Germany) in 2015.

The Strategic Council on Foreign Relations was formed on the order of Supreme Leader Ayatollah Ali Khamenei in 2006. It is tasked with preparing strategies and policies that will further Iran’s foreign policy objectives. Kharrazi serves alongside fellow former minister Ali Akbar Velayati as a key foreign policy adviser to Ayatollah Khamenei.

Asked about to what extent the Europeans would back Iran in the face of the US plan to kill the nuclear deal, Kharrazi said, “Friendship and moral commitments aren’t [considered as] criteria in [foreign policy], and countries support a particular policy as long as it secures their interests.” He added, “At the moment, the interests of the Europeans are [secured through] resisting American policies because their policies are different from the US policy toward the JCPOA, and their resistance to American pressure is necessary to maintain their independence.”

Kharrazi said that “how much longer they will continue this policy and pursue their independent path is dependent on their [considerations] about their interests, given their excessive dependencies on the United States."

Kharrazi said of White House officials, “The Americans are really serious about damaging the JCPOA, and they are seeking to find a pretext to [demonstrate] Iran as guilty of violating the JCPOA; this is their strategic goal.”

Kharrazi said, “What will happen to the JCPOA if the United States gets out of it is a hypothetical question, and this is dependent on how the Europeans would react. Will the Europeans stand up to the United States firmly and support the JCPOA? Or would they give in to US pressures? An appropriate decision must be taken to face any of these options.”

He added, “If the others get out of the deal, it is natural that nothing will be left of the JCPOA, and [we will] pursue our past policies. However, as the [Iranian] officials have said, they are ready for any situation. It is true that the Americans are regularly not honoring their commitments, and not only the spirit but also the letter of the JCPOA has been violated by the United States. But they haven’t officially left the JCPOA.”

In other news, on Sept. 11, Qatar’s ambassador to Iran, Ali Hamad Alsulaiti, who has recently returned to Tehran, met with Iranian Foreign Minister Mohammad Javad Zarif.

During this meeting, Zarif told Qatar’s ambassador, “Our policy in the region is clear, [and] we disagree with any pressure and threats against our neighbors by anyone.”

Zarif added, “The region’s issues should be solved through dialogue.”

It is noteworthy that following the attack on the Saudi Arabian Embassy in Tehran in January 2016, Qatar recalled its ambassador and downgraded its ties with Iran. However, in recent months, with the worsening of Qatar and Saudi Arabia’s relationship regional issues, Doha has started enhancing its ties with Tehran.