Egypt unwavering to US pressure over North Korea

The cooperation between Egypt and North Korea under Egyptian President Abdel Fattah al-Sisi has continued despite calls from Washington to freeze the relationship. 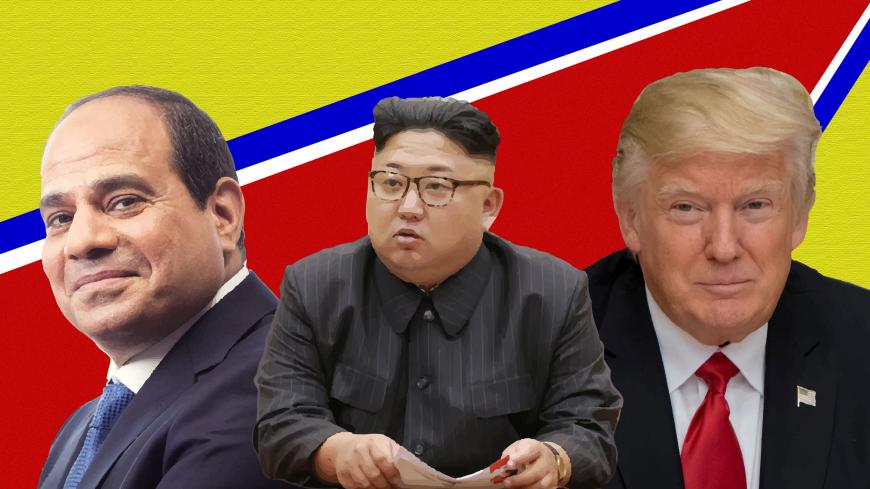 CAIRO — The ongoing cooperation between Egypt and North Korea under Egyptian President Abdel Fattah al-Sisi has led Washington to reiterate calls on Egypt to freeze such ties. This comes amid leaks that the US State Department's suspension of military aid to the Egyptian government was not linked to Egypt’s human rights record as stated, but to these specific ties, especially at the military level, as Pyongyang failed to respond to US pressure not to conduct a long-range missile test. On Aug. 23, the United States suspended $195 million in military aid to Cairo and delayed an additional $95.7 million.

The White House said in a July 5 statement that US President Donald Trump called his Egyptian counterpart. According to the statement, Trump stressed the threat from North Korea and the need for all countries to fully implement UN Security Council resolutions on North Korea, stop hosting North Korean guest workers and stop providing economic or military benefits to the country.

The relationship between North Korea and Egypt was confirmed in a report issued by the United Nations on Feb. 23, 2015, whereby the North Korean Ocean Maritime Management Company (OMM) played a key role in arranging the illicit shipment of concealed arms through individuals and entities based in Egypt and other countries.

The UN report said that OMM representatives were embedded in a company (Sunlight Agency) in Port Said at least until 2011.

The State Information Service (SIS), an official government body affiliated with the presidency, describes on its official website Egypt's relations with North Korea as “historic,” and pointed out that the two countries are tied by around 20 economic, security, media, technology and cultural agreements, among others.

The SIS website states, “The volume of the Egyptian Orascom Group's direct investments in the Democratic People's Republic of Korea has exceeded half a billion dollars, which puts Egyptian investments at the top of the pyramid of foreign investments in Korea.”

Also, Sisi had invited North Korean leader Kim Jong Un in May 2015 to attend the opening ceremony of the new Suez Canal. The invitation was welcomed by his Korean counterpart, who sent the president of the Presidium of the Supreme People's Assembly of North Korea, Kim Yong-nam, to attend the ceremony on Aug. 5, 2015.

“Relations with Egypt will develop under Sisi,” North Korea's military attache at the Korean Embassy in Cairo, Ju Haq Shul, said April 23 on the 85th anniversary of the founding of the North Korean army. He said that he is “certain the development will also include the relationship between the Egyptian and North Korean armies.”

Egypt is one of three Arab countries (in addition to Syria and Palestine) that still have an operating embassy in Pyongyang. It is also one of only five Arab countries to host a North Korean Embassy on its territory, the other countries being Syria, Algeria, Kuwait and Libya.

While a statement issued by the Egyptian Foreign Ministry in January 2016 condemned North Korea's missile test, a spokesman for the ministry described in a TV interview on Jan. 7, 2016, the relationship between the two countries as strong and stable. He said that Egypt’s criticism of North Korea’s missile test stems from its membership in the Security Council and its role in limiting the proliferation of nuclear weapons.

Egypt reiterated its condemnation of North Korea's nuclear test in a statement issued on Sept. 5 and expressed its “deep concern over North Korea's noncompliance with the relevant Security Council resolutions and its new nuclear test, which poses a threat to regional security in East Asia.”

Former Assistant Foreign Minister Gamal Bayoumi told Al-Monitor that the condemnation issued by the Egyptian Foreign Ministry is merely aimed at proving Egypt's position on the principle of nuclear proliferation as a member of the Security Council. He stressed that the strength of relations between Egypt and North Korea will not prompt Cairo to cut off relations with the Korean side nor reduce its diplomatic missions despite US pressure, as cooperation exists between the two countries.

Asked about the US calls on Cairo to freeze its relations with North Korea, Egyptian Foreign Ministry spokesman Ahmed Abu Zeid told Al-Monitor, “Egypt is managing its relations with foreign countries based on its own interests and priorities without taking into account any pressures that may hinder the independence of its national decision.”

Abu Zeid declined to comment on reports establishing a link between the Washington aid freeze and Cairo's relationship with North Korea, and said, “I cannot comment on unreliable press reports that are neither confirmed nor official.”

Asked about the future of the relations between the United States and Egypt, amid the current tensions and the recent volume of military and economic cooperation, Abu Zeid provided no answer.

US expert Mohamed Elmenshawy, a former researcher at the Washington Institute for Near East Policy, told Al-Monitor from Washington, “In the event that Washington placed intense pressure on Cairo, the latter would not risk its military relations with the United States because of its ties with North Korea.”

The Egyptian authorities are maintaining their relations with North Korea in order to use them as a pressure card on the United States in light of the tension between the United States and Egypt. Cairo would also preserve its ties with Pyongyang, since they constitute a key determinant of Egypt’s national security in light of the historical and military relations between Egypt and North Korea that are characterized by their secrecy.