On his visit to Baghdad and Erbil, Turkish Foreign Minister Mevlut Cavusoglu brought with him Turkey’s mixed signals about the planned referendum on Iraqi Kurdish independence, asking for its cancellation but naming no consequences from his country. 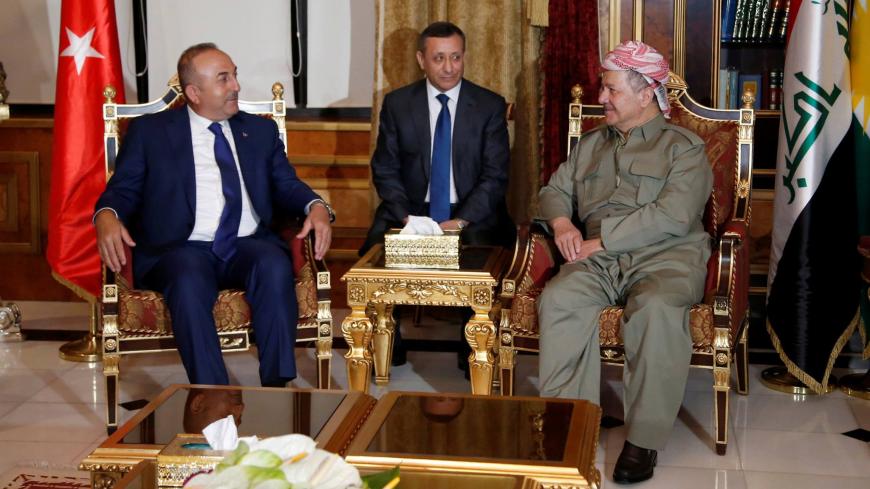 Turkey continues to send mixed signals about a planned referendum on Kurdish independence in Iraq, saying it will oppose it but doing nothing concrete to prevent it.

The country’s foreign minister, Mevlut Cavusoglu, said nothing to clarify Turkey's ambiguous stance during a lightning visit to Baghdad and Erbil yesterday. Speaking to reporters before meeting with Massoud Barzani, the president of the Iraqi Kurdistan Region, Cavusoglu reiterated Turkey’s opposition to the plebiscite due to be held on Sept. 25. “Our expectation from Erbil is clear: that is the cancellation of the referendum as the interests and future of the Kurds lies in a united Iraq.” But Cavusoglu denied considering potential sanctions such as sealing the border or halting the flow of Iraqi Kurdish crude to export terminals in southern Turkey. After meeting with Barzani, the Turkish diplomat said that flourishing trade ties were unconnected to the referendum.

A senior Iraqi Kurdish official confirmed that Cavusoglu had asked Barzani to cancel the referendum, saying it would destabilize Iraq and the region. But the official, who spoke on condition of anonymity, told Al-Monitor that Cavusoglu had made “no suggestion at all of sealing the border, revisiting trade or suspending money transfers to Erbil.”

According to the official, Barzani responded that he could not cancel the referendum because doing so would “go against the will of the Kurdish people and the majority of the political parties.”

Turkey is a critical lifeline for the landlocked statelet in northern Iraq. Many Iraqi Kurdish officials believe that if Turkey were truly against the referendum it would have matched its words with concrete action by now. The prevailing consensus is that Turkey has no desire to alienate the Iraqi Kurds, who are among its top regional allies and seen as a buffer shielding Turkey from the instability and violence engulfing the rest of Shiite-dominated Iraq. Moreover, the alliance allows Turkish President Recep Tayyip Erdogan to assert that his crackdown on Kurds sympathetic to the Kurdistan Workers Party at home is not anti-Kurdish but anti-terrorist.

Yet at the same time, Erdogan is seeking to consolidate his ultranationalist base ahead of parliamentary and presidential elections due to be held in 2019. This, in turn, means that he cannot afford to be perceived as being soft on Kurdish irredentism, even beyond Turkey’s own borders. Devlet Bahceli, the leader of the ultranationalist National Action Party, declared today that “if necessary,” the Kurdistan referendum should be viewed as a “a cause for war for Turkey.”

It’s a delicate balancing act on both sides. For Barzani, Erdogan’s repressive policies against Turkey’s Kurds makes it tricky to justify the presence of at least 2,000 Turkish troops in Iraqi Kurdistan. And his domestic critics accuse the Kurdish leader of leaving their region overly dependent on Turkey.

Turkey trumpeted last week’s visit by Iran’s chief of staff, Mohammad Hussein Bagheri, as a united Turkish-Iranian front against Kurdish separatism in general and the Kurdistan referendum in particular. Similarly, Turkish officials emphasized that getting Barzani to change his plans was among the main agenda items during US Secretary of Defense James Mattis’ visit to Ankara yesterday.

Mattis was in Erbil on Aug. 22, the latest in a string of top US officials and military commanders to ask Barzani to stay put. But Barzani shows no signs of yielding and the greater the pressure, the more resolute he grows.