With Iran's help, Hamas reaches out to Syrian regime

Iran is working as mediator as Hamas' new leadership takes steps to restore its severed ties with Syria. 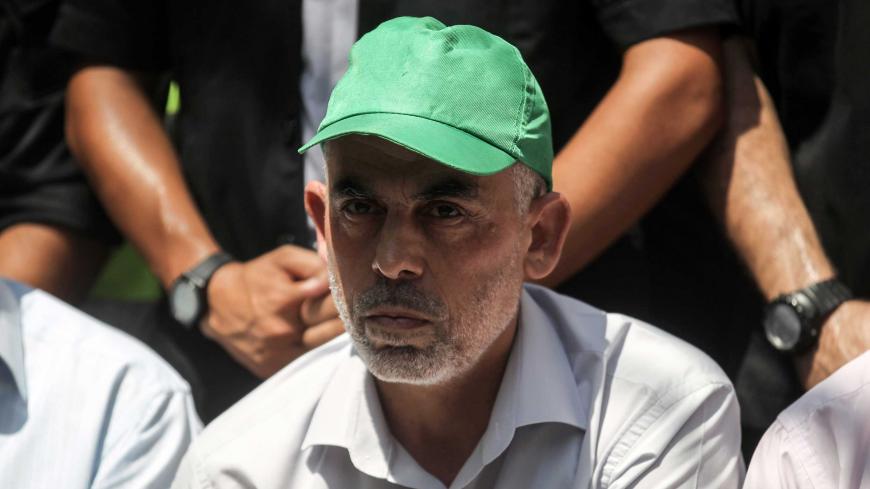 GAZA CITY, Gaza Strip — The new Hamas leadership has taken dramatic steps since assuming office in mid-February that suggest its policies will differ significantly from those of previous officials. The new administration has been trying to restore ties that had been cut off or seriously frayed with many parties such as Iran, Egypt, the Syrian regime and the followers of Fatah's dismissed leader Mohammed Dahlan.

Could this be a kinder, gentler, more accommodating Hamas? Many remain unconvinced, but Iran is working toward that goal.

Hamas left Syria at the end of 2011, after the Syrian civil war broke out, out of support for the Syrian people. The regime then completely severed its relationship with the Palestinian movement, and Syrian President Bashar al-Assad accused Hamas of supporting some of the armed groups fighting against the Syrian regime.

Hamas, a key pillar in the so-called anti-Israel “axis of resistance,” which includes Syria, Iran and Hezbollah, did not deny receiving Syrian support for years before it left the country, where it enjoyed great freedom of movement.

A well-informed source in the Iranian regime told Al-Monitor on condition of anonymity, “Senior Iranian officials, including speaker of the Shura Council Ali Larijani and adviser to the supreme leader Ali Akbar Velayati, met with Hamas leaders visiting Iran Aug. 4 to participate in the second inauguration of Iranian President Hassan Rouhani. [The officials] offered to mediate between [Hamas] and the Syrian regime in a bid to restore their broken relations."

The Hamas delegation said it welcomed the offer and would refer it to the group's leadership for consideration, according to the source.

Hamas would not mind bolstering its ties with the Syrian regime, Yahya Sinwar, the head of Hamas in the Gaza Strip, told Al-Monitor when he met with reporters Aug. 28 in Gaza. He stressed that a “breakthrough” had occurred in the Syrian crisis, and he said that it would offer an opportunity to improve relations between Hamas and the regime.

“We are waiting for the right time to restore that relationship so that Hamas remains out of the power struggles in the region. We are adopting a 'zero-problems' policy with all parties, so as to serve the Palestinian cause,” Sinwar said.

Assad has made a clear shift in tone toward the Palestinian resistance movements. During an Aug. 20 speech before a foreign affairs and immigration conference in Damascus, Assad confirmed his support for such movements and for the Palestinian cause. Notably, he didn't exclude Hamas, as he had previously done.

Iranian writer and political researcher Hussein Rweiran said Iran can exert great influence on the Syrian regime to restore relations with Hamas. Hamas is in dire need of restoring this relationship, he noted, as Syria is the only country bordering Palestinian territories that doesn't recognize and maintain relations with Israel. He predicted that although the Syrian regime is preoccupied with internal struggles, its support for the Palestinian cause and the resistance movements will remain strong.

Rweiran said the Syrian regime is unlikely to ask for guarantees in return for restoring its ties with Hamas. The latter has agreed to dismantle its organizational ties with the Muslim Brotherhood and, in a new political document published May 1, introduced itself as strictly a Palestinian resistance movement, rather than one with a more global doctrine. These steps represent a major change in Hamas' ideology and provide a foundation upon which to revive Hamas’ relations with the Syrian regime now that ties have been restored with Iran and Hezbollah, he added.

Abdul Sattar Qassem, a political science professor at An-Najah National University in Nablus, told Al-Monitor, “The talks have been ongoing for months between Hamas on one side and the Iranians and Hezbollah on the other to set the stage for the return of the relationship between Hamas and the Syrian regime.”

Hamas has not and will not find a better country than Syria as a safe haven for its political leadership, Qassem said. (Hamas leaders had resided in Qatar but were asked to leave in June under pressure from other Gulf countries.) Hamas is also convinced that it's in its best interest for Syria to control the Golan front in any future military confrontation with Israel.

Qassem said he is confident that Iran will help change the Syrian regime’s position toward Hamas, as Iran is eager to return Hamas and the Palestinian resistance movements to the axis of resistance, which those movements left after the conflicts known as the Arab Spring arose in 2010. He also called on Hamas to prove its openness to working with the Syrian regime.

With the momentum Hamas has built up, Iran's efforts to help restore relations between Hamas and the Syrian regime stand a fair chance of success. Hamas has already managed to alleviate much of its tension with other parties in the region — except for Israel, of course.