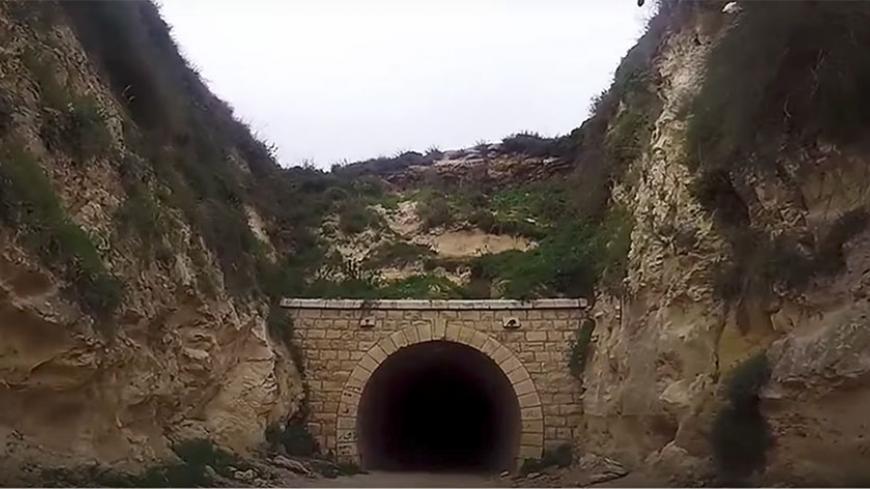 An Ottoman era railway tunnel in Balaa, the West Bank, is seen in a still from a video uploaded on March 20, 2017. - YouTube/Rashid Faddah

TULKARM, West Bank — Under a slope near the Palestinian village of Balaa, in the hills 9 kilometers (5.6 miles) east of Tulkarm, lies a 19th century train tunnel, a remnant of Ottoman Sultan Abdulhamid II’s ambitions to tie the empire’s capital, Constantinople, to the holy shrines of Islam.

Today, only the arched walls and internal chambers where passengers waited for trains remain, as the rails have been looted several times over by thieves. Yet the tunnel, called Al-Kharq (The Breach), continues to attract visitors.

“The Ottoman train tunnel was built in the time of Sultan Abdulhamid II on the ruins of a Roman and Byzantine village, between 1876 and 1908,” Mofeed Salah, the head of the Tulkarm Tourism and Archaeology Office, told Al-Monitor. “It is an Ottoman archaeological treasure and an important historical monument, 240 meters long, 6 meters wide and 12 meters tall [787 by 19½ by 39 feet]. It went out of use during World War I after the collapse of the Ottoman Empire.”

Salah said, “But after that, the railway resumed its operation during the British Mandate over Palestine in 1923, and was used to move troops and equipment. After the British withdrew from Palestine, it was last used in 1948 by Israeli gangs to expel and force Palestinians out of their lands.”

During the earlier days, the railway was used to transport pilgrims to Medina and Mecca. "The station was used by passengers from three governorates — Jenin, Nablus and Tulkarm,” Salah said. Abdulhamid, who ruled the declining empire with an iron fist, thought the Hejaz Railway would establish a connection between Constantinople (Istanbul) and the holy cities of Mecca and Medina, the destination of the annual hajj pilgrimage. He also wanted to cement the economic and political integration of the distant Arabian provinces into the Ottoman state, as an antidote to rising Arab nationalism. Finally, he envisaged sending his military forces to the region using the railway, if push came to shove, against either the Arabs or the imperial powers that had an eye on the Middle East.

The tunnel was dug by “sukhra,” soldiers forcibly conscripted under the Ottoman Empire, using basic tools. Salah told Al-Monitor that before the tunnel was dug, Ottoman officials thought it would be impossible to cut through the mountain. “That prompted them to hire a group of German and Turkish engineers, given the strong relationship between the two empires at the time,” he said. “The result was a tunnel that is a model of the geographical, political and economic connections between Palestine and the world.”

“The tunnel is [today] a tourist destination for families from Tulkarm and nearby areas who enjoy the beauty of the construction, the nature in the hills around it and the plants that cover the slopes such as thyme and anemones,” he said. “They relax and enjoy the beautiful surroundings and the views of nature. The tunnel now attracts thousands of both domestic and foreign tourists throughout the year, namely from Turkey. Tourists head to the tunnel especially during the spring and summer seasons given the beauty of nature surrounding it.”

Salah said the Ministry of Tourism and Antiquities considered the tunnel’s renovation a top priority in order to preserve its historical and archaeological status, since the tunnel was added to the archaeological and touristic map of Tulkarm. Volunteers from youth groups have helped restore some of the cracked walls and helped level the ground to make it easier for visitors to walk. Information panels were also put up in the center of the village of Balaa, pointing toward the tunnel and explaining its history.

Salah added, “The tunnel was looted on several occasions by antiquities thieves who conducted illegal excavation works inside the tunnel. These thieves were employed by Israeli gangs — including both Arabs and Jews — as they believed Ottomans had buried golden treasures underneath the tunnel before they left Palestine following the empire’s collapse. These actions were revealed by the Palestinian police investigations. The police had questioned several thieves who were arrested. Most of them were unemployed and would get paid no more than $15 [a night] to loot the tunnel."

“This kind of theft has been stopped through coordination with the tourism and archaeology police to track those thieves. There is a phone line where people can call to report on the thieves,” said Saleh.

He added that the police force has worked in the area despite Israeli restrictions that often prevent Palestinian police officers from doing their jobs, as the tunnel lies in Area C, which is under full Israeli control. Area C constitutes about 60% of the West Bank territories that are almost under complete Israeli control. Israel is responsible for the security and civil affairs related to the ownership of lands in Area C, including land allocation, planning, construction and infrastructure. The Palestinian Authority is in charge of education and health.

Salah said that Israel had taken control of 70% of the Ottoman train line, leaving 240 sections of track under Palestinian control. “The tourism and archaeology office has stored them to prevent their being stolen or damaged, as they tell the story of over 100 years of Ottoman rule in Palestine,” he said.

He added, “When the railway was built, the Ottomans deliberately put the stations close to each other to make them easier to protect from attacks and theft. They could run more or fewer trains depending on the number of passengers and the amount of cargo they needed to transport."

In 1923, during the British Mandate, the British used the trains to transport soldiers and weapons to put down the Palestinian revolt.

“That meant Palestinian rebels had to attack and sabotage the railway on several occasions,” Maali said. “The Zionist movement also used the railway to speed up its settlement projects and to transport equipment and food to Jewish communities.”

Yousef Suleiman, 83, remembers when the train was in use. He said that during the mandate era, the station was restored and the tracks were modernized.

“The trains ran on coal and were made up of four carriages that were used to transport pilgrims, passengers and cargo. A single ticket only cost between 7 and 10 qirsh,” Suleiman told Al-Monitor. The qirsh was a coin used during the Ottoman era that has also been used in various Middle Eastern countries, performing a role similar to that of a penny.

“I traveled with my father through the Ottoman tunnel to Medina. It was the easiest and quickest way of traveling from one town or city to another. It meant there were fewer ambushes by highwaymen, who used to attack people traveling by camel on the roads to make the hajj pilgrimage, or traders transporting goods and livestock,” he added.

“I remember the train blowing its whistle to announce its arrival, and getting on board with my father. The tunnel was pretty dark, but there were chambers inside it where people would wait and board the train. There were other chambers where passengers could take refuge to avoid being run over as the train went through,” Suleiman said.

The Palestinian Central Bureau of Statistics says 53% of Palestine’s historic sites are in Area C, controlled by Israel, which prevents any research or restoration work on them.