US pushes back on Turkish media claims about Syrian Kurds

US Embassy in Ankara refutes fevered claims about aid deliveries to Syrian Kurds. 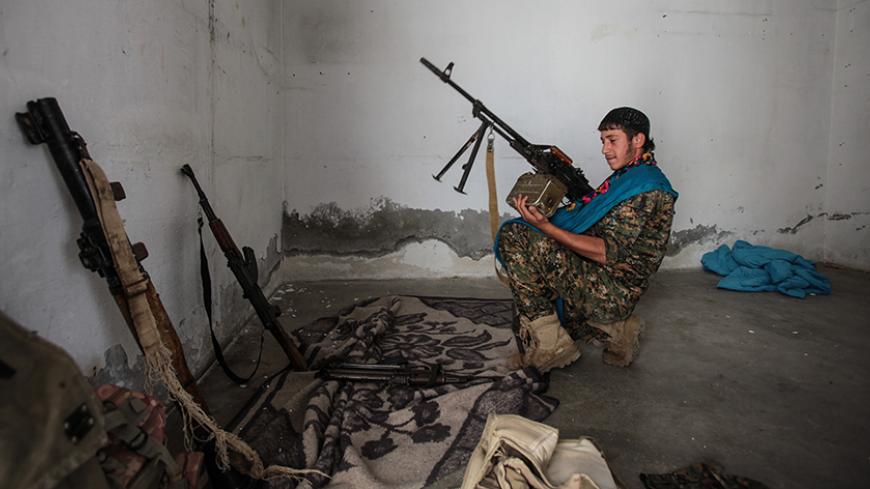 The United States today broke its silence over the unremitting slew of accusations about its supposed plans to undermine Turkey through its armed support for Syrian Kurds fighting against the Islamic State (IS). The US Embassy in Ankara refuted the claims in a statement published on its website in English and in Turkish and shared via Twitter.

The statement read, “Inaccurate reports by several outlets over the past few days have erroneously claimed that the United States has sent ‘tanks’ and ‘hundreds of truckloads of weapons’ into Syria to support the YPG [Syrian Kurdish People’s Protection Units].” It also declared, “The United States has not provided tanks to any groups fighting Daesh in Syria,” Daesh being the Arabic acronym for IS.

The embassy said that “the majority of military assistance, which consists of light weapons and ammunition,” was being sent to the Syrian Arab coalition, the assorted Arab groups fighting under the banner of the YPG-led Syrian Democratic Forces (SDF). “A much smaller percentage of weapons given to Kurdish elements of the SDF are limited, specific to task, and are only provided due to their importance in helping achieve the goal shared by all of us — i.e., the capture of Raqqa and the destruction of Daesh,” the embassy asserted.

The statement was in response to a barrage of front-page stories in Turkey's pro-government media claiming that the United States is raining military goodies on the YPG. The state-run Anadolu Agency reported that Washington has so far sent 909 truckloads of weapons to the YPG. An array of outlets eagerly seized and elaborated on the story.

“The YPG is being armed. Is the target Turkey?” asked Haber 10, an online news portal. Other outlets claimed that the United States had provided tanks and helicopters to the YPG and trained YPG militants to fly them. Yeni Akit, referring to the deliveries, proclaimed, “The United States plan to occupy Turkey.”

An SDF commander speaking to Al-Monitor via WhatsApp from northern Syria called the reports risible. “America did not give us any tanks,” he said. “The tanks we have were captured from Daesh.” A question about receiving helicopters elicited loud guffaws. Analysts closely monitoring the conflict concur.

Aaron Stein, a senior fellow at the Atlantic Council, has written extensively about the US-Syrian Kurdish partnership. “The public list of weapons to be given to the YPG was obviously written with Turkey in mind. They are not game-changing weapons,” Stein told Al-Monitor. “Its mostly ammunition for guns the YPG already has.”

The United States has been giving military gear to the Arab component of the SDF for several years, drawing on the provisions of a program to arm and train the vetted, moderate Syrian opposition. The Pentagon only began arming the YPG directly after President Donald Trump, overriding Turkish objections, authorized it to do so in April.

Stein argues that the real issue does not concern the nature of the weapons as such. Rather, he maintains, it is political. “The US is giving military support to a partner force that Turkey views as its No. 1 security threat,” he said, referring to the YPG's connection to the Kurdistan Workers Party, which has been fighting the Turkish army since 1984. American pledges to reclaim weapons from the YPG once the fight against IS is complete cuts little ice with Turkish officials, who insist it is only a matter of time before they end up being directed at Turkey.

In any case the “vast majority” of the trucks crossing into Syria via Iraqi Kurdistan contain “foodstuffs and medicine,” the embassy stated. It added, “Erroneous reporting suggesting otherwise is dangerous and distracts from our joint desire and objective to destroy Daesh.”

Turkey does not allow humanitarian aid to be channeled through its borders to the Kurdish-controlled chunk of northern Syria. It has began squeezing and in some instances shuttering international aid agencies that run their Syria operations from its soil. Some Trump administration officials have begun advancing the idea of shutting down US government aid operations in Turkey altogether because of the ever-thickening tangle of red tape. More importantly, there is growing concern about some of the supplies winding up in the hands of hostile elements, such as the al-Qaeda-linked Hayat Tahrir al-Sham, once it crosses the border.