There’s a flurry of positioning as Iran, Russia, the United States and Israel all want assurances about the future balance of power in Syria. 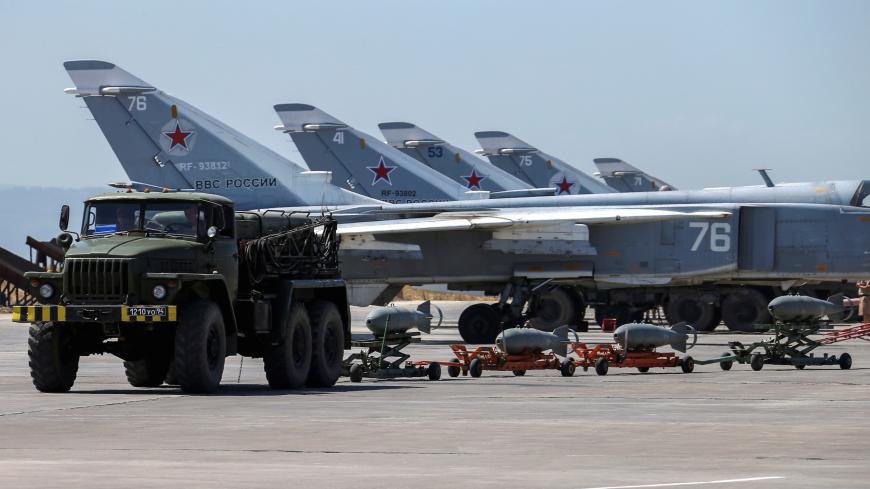 Last week, Israeli Prime Minister Benjamin Netanyahu held talks with Russian President Vladimir Putin at Putin’s Black Sea residence in Sochi. It was their sixth meeting over the last two years, since Russia’s air force began its military operation in Syria. Netanyahu came to express his concern over the intentions of Iran and its allied Shiite militant movement, Hezbollah, to establish a permanent presence in an area of Syria currently being surrendered by the Islamic State (IS).

The Israelis are preoccupied with who is going to play the key role in the postwar future of Syria.

Netanyahu’s visit Aug. 23 came within three days of Syrian President Bashar al-Assad's speech before diplomats in Damascus, where he put Russia on par with Iran and Hezbollah, thanking them for their support in the fight against terrorism and for Syria’s salvation.

The Syrian army and Hezbollah are conducting a successful military operation against IS along the Lebanon-Syria border. There are positive developments on other fronts as well. Thus, against this backdrop, who will be able to point Iran and its allies to the door, and how? Could Putin be useful to Netanyahu to this effect? The answer is no.

“Even if he wanted to, [Putin’s] help could be nothing but psychotherapeutic, that is, he could only listen to his Israeli counterpart, but would hardly ever be able to limit Iran’s influence in the region. Yet it should have been flattering for Putin to be consulted on such serious geopolitical matters, and in this respect the meeting was mutually beneficial,” Andrey Kolesnikov, special correspondent of the Russian Kommersant newspaper and a member of the Kremlin’s press pool for 20 years, wrote in describing the Sochi meeting.

Speaking before journalists, the Russian president avoided comments on Netanyahu’s complaints about Iran, confining himself to vague generalities of being pleased with “the effective mechanism of cooperation established between [Russia and Israel], including the relationship between the leaders.” It was a clear message to Tehran that Moscow hadn’t changed its position. Several hours later, this position was confirmed by Vasily Nebenzya, Russia’s permanent representative to the UN, who was quoted by Interfax as saying: “We know the position of Israel on Iran, but we believe that Iran is playing a very constructive role in Syria.”

Moscow spent several years convincing the international community to acknowledge Iran as a rightful member of the talks on Syria. Though Tehran is a serious competitor of Moscow in Syria militarily — and in the near future economically and politically — the reality is that without Iran, Syria’s situation will hardly be stabilized. That is well understood in Moscow.

The very possibility of a dialogue between Moscow and Tehran is getting on Washington's nerves.

There is one more point. The very possibility of a dialogue between Moscow and Tehran is getting on Washington's nerves, which gives additional weight to Russia’s position in the Syria talks. Besides, the degree of Russia’s influence on Iran — if it exists — is irrelevant in this regard. What matters is Russia’s appearance of influence, the semblance of power.

That said, Moscow is genuinely taking into consideration Israel’s position on regional security. According to Israeli media, Russian Ambassador to Israel Alexander Shane said that after the conflict is settled, pro-Iranian or any other foreign troops should not stay in Syria. The only hitch is that Russia is also a foreign power, and its policy in Syria is mapped out not in the Foreign Ministry, but in the presidential administration and the Defense Ministry. However, no representative of the military was present at the Putin-Netanyahu talks. On the Israeli side, Netanyahu was accompanied by Mossad Director Yossi Cohen, who reportedly provided the Russian president with “sensitive, credible and very disturbing detailed intelligence” on Iran’s military activity in Syria — all to convince Moscow that Tehran poses a threat.

Clearly, Israel and the United States want a guarantee there will be no Iranian military bases in Syria, while Iran wants to ensure there will be no American ones. They are unlikely to agree that the only foreign military presence there should be Russian. Moscow is not willing to give up its bases in Tartus and Khmeimim. The Kremlin is now listening to all parties, but is making no promises to anyone.

That means Israel, in the meantime, will have to be satisfied with what it already has — which isn’t insubstantial. Moscow is mostly blind to Israel’s operations against Hezbollah in Syria, but is vigilant when it comes to preventing any large-scale confrontations of Israeli forces with the Syrian army. One of the most dangerous situations occurred in March, when a week after Netanyahu’s Moscow visit the Israeli air force hit the facilities of the Syrian army near Palmyra, allegedly to target a Hezbollah weapons convoy. Syrian air defense forces struck back. Israeli Ambassador to Russia Gary Koren was summoned to the Russian Foreign Ministry, where he was told Moscow found “unacceptable” any military clashes between Israel and the Syrian army. Yet the Russians said not a single word about Hezbollah.

Nevertheless, staying between Israel and Iran gives Russia certain space for maneuver. Hezbollah regiments and Iraqi Shiite formations may go home (to Lebanon and Iraq, respectively) on several conditions. First and foremost is Syria’s stabilization and guarantees that Iran’s interests will be looked after there. Moreover, this departure cannot look like a triumph of Israel and the United States. Russia could become a go-between on this issue, but in any case, there should be an agreement with Iran.

It is noteworthy that on the day Netanyahu was meeting with Putin, the Russian Defense Ministry announced that the center in Amman, Jordan, that monitors Syria’s southern de-escalation zone had finally started its work. Agreements on monitoring were reached as early as July, and have been a serious worry to Israel. For Russia, however, the de-escalation zones are matters of special pride. Moscow is indeed so proud of negotiating the achievement that at an Aug. 23 meeting with Lebanese Defense Minister Yacoub Sarraf, Russian Defense Minister Sergei Shoigu declared that establishment of the four zones had brought Syria’s civil war to an end.

There is, however, no clear-cut agreement on the zone in the Idlib region.

The meeting between Shoigu and Sarraf took place on the same day as the talks between Putin and Netanyahu. This coincidence is rather symbolic — the strategy of Moscow in Syria today resembles a multiple-board chess game.