The organizers of the "New Likud" estimate that some 12,000 people have joined the Likud Party because of them, with the goal of creating a bloc powerful enough to influence the party's direction from the inside. 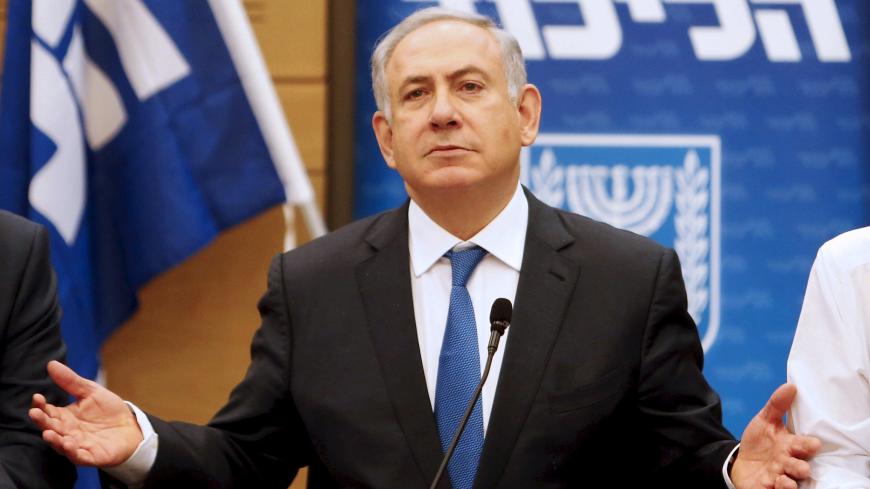 A young couple in their 30s joined the Likud Party three months ago; they are part of a group that calls itself the "New Likud." Both voted for the Zionist Camp in the last election, and neither intends to vote Likud in the next election.

Talking to Al-Monitor, the husband said that most of his close friends, who all live in Tel Aviv, have joined the Likud Party in the last few months. "We all identify with the center-left. I am actually thinking of voting for Meretz in the next election. We just reached the conclusion that the Likud will remain in power in the years to come, so we want to influence it from the inside. We want to choose who will be on its Knesset list and promote our own interests," he said.

He insisted on anonymity, since the party is taking a variety of measures to block the New Likud phenomenon. Likud officials claim that it is actually a hostile takeover of the party and part of an attempt to remove its leader, Prime Minister Benjamin Netanyahu. On Aug. 14, Maariv newspaper reported that the Likud Party decided to end online registration for the party on its website. In the next few days, the party's internal court will decide whether to invalidate the party credentials of several prominent members of the New Likud for allegedly acting against the Likud Party from the inside.

The organizers of the New Likud estimate that, because of the initiative, some 12,000 people have joined the Likud, out of 100,000 Likud members. They plan to continue increasing their numbers until the next party primaries. Their goal is to create a bloc powerful enough to influence the party's direction from the inside and determine who will appear on its Knesset list. Most of these new members have never voted for the Likud, nor do they plan to do so in the future.

The group first became active about six years ago, in the wake of the social protests, when they reached the conclusion that the best way to influence the situation in Israel was through the ruling party. They had no significant impact over the next few years. Only a handful of like-minded people actually joined the Likud, and the party considered them little more than a curiosity. After the Zionist Camp's defeat in the last election in 2015, however, the New Likud phenomenon began to gather momentum. It has picked up over the last few months, especially among young people, some of whom attended the recent demonstrations outside State Attorney General Avichai Mandelblit's home, where they called on him to complete the investigations into Netanyahu's affairs.

Suddenly, the Likud discovered that a well-organized and powerful new group had been formed right under their noses, and that it was not following the party's current codes of behavior. Coalition chairman David Bitan realized that launching a campaign against the group would have enormous media potential, so he decided to declare war against it. In interviews with the press, he accused the New Likud of launching a hostile takeover bid with the intention of toppling Netanyahu. He then announced that the appropriate steps will be taken to distance them from the party. "The Likud has a right to defend itself," he told Radio Kan Bet. "If we need to amend the party's constitution, we will. There is no reason for the Likud to accept people who are not Likud, just because they disguise themselves as Likud."

Bitan is wrong in claiming that the group wants to bring down Netanyahu for its own reasons. What the New Likud wants to do most of all is to advance the interests of young members of the middle class who serve in the reserve forces and bear the burden of paying taxes. In the last election, they named Knesset members Gilad Erdan and Yoav Kish on their list of recommended candidates. On the other hand, Bitan is totally right that having so many people identified with the left joining the party is a serious distortion of the Likud, since they do not identify with its values and goals.

Following Bitan's attack, the New Likud's Facebook page was made private, and posts began to include recommendations on how members could dispel insinuations against them. One post said that the purpose of the New Likud was to influence the election of the Likud's Knesset list in the next election. According to a New Likud source, one post read, "We are a large and united group with a common agenda based on the Likud's constitution, with an active influence on the party's discourse and the decisions that are made." They also attempted to dispel accusations that the New Likud's members lean to the left. On the other hand, while some of the group's founders, such as Lior Meiri, do have ties to the Likud, the vast majority of its members has no commitment to the party.

The New Likud phenomenon is reminiscent of the Feiglinites, a far-right group that attempted to take over the Likud in the early 2000s to prevent diplomatic concessions that would include a withdrawal from some of the territories. Then-Prime Minister Ariel Sharon, and later Netanyahu, fought against them, claiming that they were engaged in a hostile takeover of the party and its institutions. The group had about 7,000 members in its heyday, and it is believed that many of them voted for other parties, mainly on the far right. Despite their strength within the party, the Feiglinites had a hard time getting their leader Moshe Feiglin into the Knesset in the 2013 election.

Though the Feiglinites began as a foreign element within the Likud, over time they became an integral part of the party landscape. This is because many Knesset members asked for their support in the primaries. As far as results, however, the group did not achieve its objectives; it failed to prevent the 2005 disengagement from the Gaza Strip and had no real impact on the party's agenda. It fell apart before the last election, and most of its members left the Likud.

It is both manipulative and problematic to join a party without identifying with its objectives, and with the sole purpose of changing the very character of the party and influencing it from within. It is the right and even the responsibility of the party to defend itself from organized efforts such as these to change it. The Likud could be flattered that the conventional wisdom is that the party's internal election is more important than the general election, so much so that even Meretz and Labor Party voters want to participate in its primaries. Nevertheless, they are also right to take steps to defend their party.

It would be wrong to launch a highly publicized campaign to expel thousands of New Likud supporters from the party, nor is there any way to determine who is a "genuine" Likud supporter and who is actually a secret leftist. On the other hand, it is certainly worth considering amending the party's constitution and introducing a three-year waiting period from the moment someone joins the party until that party member obtains the right to vote within the party's institutions.