A deterioration in economic and political relations between Tehran and Dushanbe since moderate Hassan Rouhani first took office has allowed Saudi Arabia to expand its influence in Tajikistan at Iran’s expense. 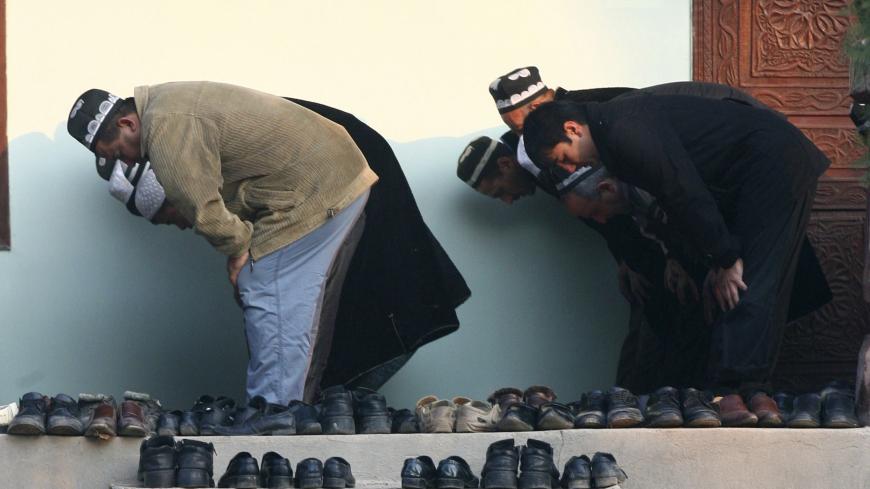 Men pray during Kurban Ait, known as Eid al-Adha in Arabic, at a mosque in the village of Nurabad, Tajikistan, Nov. 16, 2010. - REUTERS/Nozim Kalandarov

In an unprecedented move that surprised many observers around the world, Tajikistan’s state TV on Aug. 8 aired a documentary accusing Iran of involvement in the murder of several Tajik social and political figures as well as 20 Russian military officers in the country during the 1990s Tajik civil war. The documentary further claimed that at the time, Iran had organized a plot to “eliminate Tajik scientists and intellectuals.” The accusations, emphatically rejected by Iran, were just the latest and the most blatant move by the Tajikistan government against the Islamic Republic.

On June 30, it was announced that Tajik authorities had ordered the closure of Iran’s economic and cultural centers in the northern city of Khujand. Unofficial news sources indicate that in spite of Russian and Chinese support for Iran to become a full member of the Shanghai Cooperation Organization, Tajikistan’s repeated opposition has been the main hurdle in this regard.

According to the Tajik government's official narrative, the main reason behind the recent tension is Iran’s support of “terrorist organizations” targeting the Dushanbe government and Tehran's attempt to promote “Islamic radicalism” in Tajikistan. In fact, such claims have been the centerpiece of Tajik officials’ accusations against Iran since December 2015, when Muhiddin Kabiri, a Tajik opposition figure and leader of the Islamic Renaissance Party of Tajikistan (IRPT), was invited to Iran to attend the International Islamic Unity Conference. On the sidelines of the conference, Kabiri held a meeting with Iran's supreme leader, Ayatollah Ali Khamenei. The IRPT, for more than two decades the most important opposition party in Tajikistan, had been designated a “terrorist organization” by the government in mid-2015, so Kabiri’s visit to Tehran elicited a harsh response in Dushanbe.

If one analyzes the Tehran-Dushanbe relationship within a broader historical perspective, however, it is clear that the Kabiri case merely rests upon the deeper roots of ongoing tensions. To better understand situation, it is necessary to consider Tajikistan’s economic situation and the role of foreign finance and investment in its economy.

Generally speaking, in economic terms Tajikistan is one of the weakest republics of the former Soviet Union, with a significant negative trade balance and low gross domestic product per capita. It has looked for foreign sources of economic support since the early days of its independence.

The active role Iran played during the Tajik civil war in helping broker a cease-fire in 1995 and taking the first steps toward peace allowed Tehran to take advantage of opportunities in Tajikistan’s postwar economy. As a result, trade and economic relations between the two countries grew. The most important symbol of Iran’s economic role in the Central Asian republic is the Sangtuda 2 hydroelectric power plant, in Khatlon province, built and operated by Iranian companies.

Major state-sponsored infrastructure projects aside, Iranian private businesses have also became active in Tajikistan. The economic empire of the infamous Iranian businessman Babak Zanjani — consisting of a private bank, an airline, a taxi firm and a bus station among other entities — is the most prominent example of Iranian private sector activities in Tajikistan.

After Hassan Rouhani assumed Iran's presidency in 2013, two major developments arose to cause problems in bilateral relations. First, Iran began to pressure Tajikistan to fulfill previously agreed to contractual obligations, especially paying down huge debts. Second, Zanjani was accused of fraud in Iran, which led to debate over the fate of his enterprises in Tajikistan becoming another source of contention. The Tajiks denied any links to Zanjani and seized his assets, a move that further widened the gap between the two countries.

With the increasing disagreements with Iran, Tajikistan sought closer ties with a new source of financial support, Saudi Arabia. Indeed, engaging in Tajikistan’s economy was an offer the Saudis could hardly refuse, as the influence they stood to gain could enable them to counterbalance Iran’s influence in Central Asia.

In fact, the Saudis were quick to declare their readiness to finance the construction of some of Tajikistan’s most ambitious infrastructure projects, such as the Rogun hydroelectric power plant. At the same time, the Saudi Development Fund supported social welfare projects, most notably in the field of education. In addition, the Saudi Islamic Development Bank provided the resources to construct a new highway in the eastern part of the country.

As anticipated, Saudi Arabia’s increasing economic clout in Tajikistan began to spill over into the political sphere. In December 2015, it was announced that Saudi diplomats were trying to persuade Dushanbe to join Riyadh's “anti-terrorist alliance,” for which containing Iran was believed to be the true aim. The Tajik-Saudi relationship developed to the point that Saudi King Salman bin Abdul-Aziz Al Saud called Tajikistan an “important partner” in the region.

Meanwhile, Saudi media were actively painting a threatening picture of Iran to the Tajiks, leading them to question Tehran’s motives. For instance, in an article in Al-Watan that was republished by other Saudi media outlets, Iran was accused of “state terrorism” in Tajikistan. Russian international relations expert Alexander Knyazev has even suggested that the Saudis were behind the anti-Iranian documentary aired on Tajik state TV.

All in all, it could be said that ideological factors have played only a marginal role in souring the Tehran-Dushanbe relationship and Riyadh gaining influence in Tajikistan. Indeed, that the majority of Tajiks while Persian speaking are also Sunnis is an advantage for Saudi Arabia, its money, not its ideology, has played the most significant role in the equation. As such, it seems that the only way for Iran to bolster its influence in Tajikistan is to find a way back into the country's economic sphere and to settle ongoing disputes. Otherwise, the current situation could represent the first major advance in a Saudi-led campaign against Iran in Central Asia.