Nesma Rafet, who left a corporate career for swimming with dolphins, says her male colleagues' attitude that she couldn’t do the job encouraged her further. 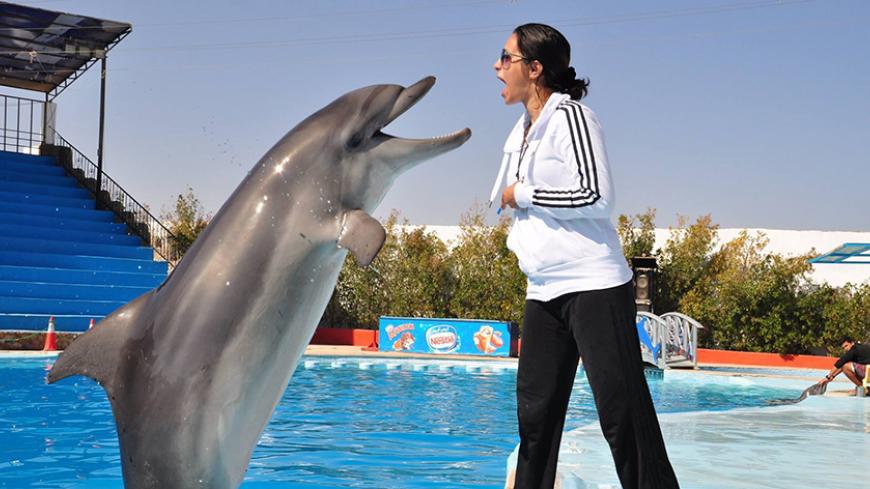 Nesma Rafet’s love of the sea dates back to her childhood in the coastal city of Alexandria, but very few people would have predicted that this would be the basis of her career, as Egypt’s first certified female dolphin trainer.

A graduate of Alexandria University's faculty of law, she moved to Sharm el-Sheikh to work as a secretary in a hotel. It was there near the Red Sea when her career plans changed after attending a dolphin show.

"I wanted to pursue a career after my own heart, so I decided to make a career shift. I left everything for the sake of dolphins. My mother thought I lost my mind, but I insisted on becoming a dolphin trainer, and I applied for this job opportunity at one of Sharm el-Sheikh's hotels 10 years ago despite many raised eyebrows," Rafet told Al-Monitor.

Her first step 10 years ago was to take lessons from a group of Russian trainers. "Both the trainers and trainees were all male,” said Rafet. “My male colleagues were sure that I was not serious about the job and would quit in the near future. Their attitude further stimulated me to smash the gender role barriers and prove that girls can do anything.”

During this six-month training course, she learned how to deal with dolphins and how to keep them alert and playful during live shows. "Dolphins are very intelligent, and the trainer should be smart enough to get them to do what she wants. I learned how to read dolphins’ minds. At first I watched them, keeping a distance. Step by step I got closer to them,'' Rafet said.

Although she is a good swimmer, she took an intensive swimming course because this career requires professional-level swimming skills and fitness. After finishing the swimming course, she started to work as a co-coordinator, rather than a trainer. "I was just helping the dolphins do the multiple tricks in public shows. Before the live show, I had to swim with the dolphins in the pool to break the ice to make them love me. I had to feed them and spend a certain period with them in the water. All these steps help enhance interaction between us," she said.

Propelling her career forward, Rafet became a full-fledged trainer — the first woman to do the job in Egypt and the whole Middle East, she emphasized. She started to train dolphins to do various show tricks and jumps that she devised. Her technique involved “positive reinforcement,” where good performance gets awarded. "I adopt a certain philosophy in dealing with my dolphins. We are friends. If the dolphin performs well, it will receive a fish as a reward," she said. "Dolphins are like children, and each dolphin has its own character. It takes very long to train dolphins. For instance, dolphins have a fear of balls. So I must eliminate this fear before teaching them how to do tricks with a ball. It may take four months to train a single dolphin. This job needs patience.”

She also uses hand signals and a whistle to train the sea mammal. "Each signal refers to a certain trick. As for the whistle, it is a signal that the dolphin performed well and the food is coming. When I blow the whistle, the dolphin knows the reward is on the way,'' Rafet said.

Her daily routine involves an early start to prepare food for the dolphins. Then she gives them a shower and massage twice a day to keep them physically active. "I play with them and give them a one-hour break before the show."

Rafet faced many obstacles on the way to achieving her dream. "I heard many negative comments: 'You will wear tight clothes,' 'You will spend the whole day in the pool,' 'You should not jump and swim in public.' But I ignored them," she said, adding that her mother and husband are very supportive and understand the nature of her job.

Rafet noted that dolphins are more receptive to female trainers, giving her an advantage over her male colleagues. "Once I took a long vacation and one of the dolphins I trained was extremely sick. It refused to take medicine because I was not there. So I cut my vacation short to stay with it," she said.

She also suffered a skull fracture after jumping in a wrong way. "It was my fault, not the dolphin's. Any injury is usually caused by the trainer, not the dolphin," she said.

As animal rights activists worldwide are calling for putting an end to dolphin shows because they believe dolphins should not live in captivity, Rafet argues that trainers provide dolphins with the optimum care that cannot be found elsewhere. "We provide them with nutritious meals. We perfectly care about their cleanness and health. They are not living in confinement. Swimming pools are also large enough," the trainer said.

Rafet is planning to step up her career by organizing training courses for young people who aspire to become dolphin trainers, not only in Egypt but in the Arab world as well. "I dream of leaving public shows and dedicating my whole time to teaching people and raising their awareness of this profession. Many girls from various governorates nationwide told me they want to become dolphin trainers. And I am planning to train the largest possible number," she concluded.