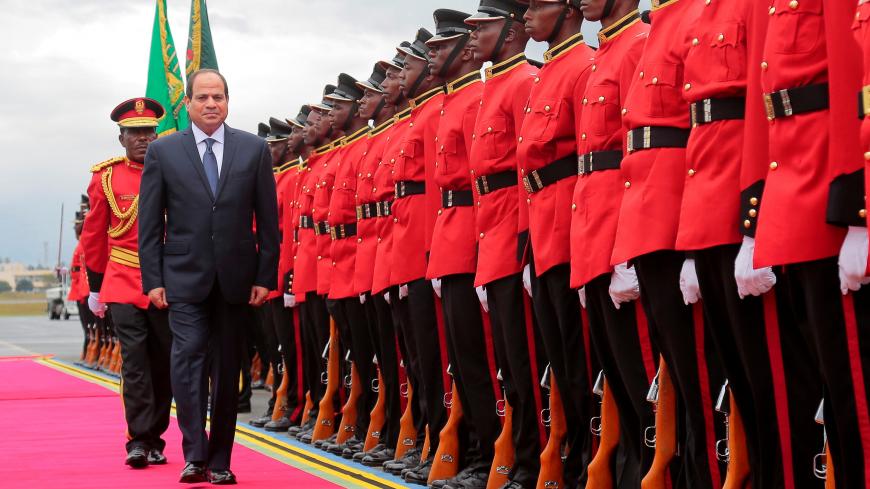 CAIRO — With the objective of advancing his country's interests in the African continent, Egyptian President Abdel Fattah al-Sisi paid visits to Tanzania, Rwanda, Chad and Gabon on Aug. 14-17. The agenda included issues related to Egyptian national security, most prominently the Nile water dossier, and the military and technical support in countering terrorism in West Africa.

Sisi's visits carried messages from the Egyptian political administration, most notably among them that Egypt intends to provide Chad and Gabon with immeasurable military and security support, in terms of capacity building and export of military equipment. This is in addition to Egypt’s desire to address the water issue indirectly by prompting the upstream countries to resort to other energy sources, such as wind energy and solar energy, instead of the Nile waters to generate electricity. The president also expressed the Egyptian desire that the Nile waters be used without causing harm to Egyptian interests, stressing that in the eyes of Egypt, the Nile water issue is a matter of life or death that requires the dispute to be resolved.

Although legal differences over the Nile water management were not resolved during the Nile Basin Heads of State Summit held June 22 in Uganda, Egypt is carrying on with a policy of rapprochement and creation of mutual interests to bring African countries, especially the Nile basin countries, on its side.

An official at the Egyptian Ministry of Foreign Affairs, who is informed about the African dossier and accompanied Sisi on his African tour, told Al-Monitor, “Our plan centers on intensive political, diplomatic and technical efforts to revitalize strategic focal areas in East and West Africa, without relying on mediators who have strong ties with the continent’s countries, such as the Gulf countries.”

In regard to the reason why Sisi included Tanzania and Rwanda in his tour, the official, who declined to be named, said, “We are well-aware of how dangerous it is to rely on a single country as mediator in the Nile water issue. Uganda tried to bring views closer between Egypt and the rest of the upstream countries. But nothing has been achieved yet. Based on that, direct bilateral contacts with the Nile Basin countries were necessary — not only to make the Egyptian views clear but also to create direct interests that would reduce tension and fear and highlight Egypt's keenness to achieve development and assist the Nile Basin countries away from any monopoly over the Nile waters.”

The official added, “There is reassessment of the Egyptian political, security and strategic perception in dealing with the African region. The yearslong social and political negligence has severely harmed Egyptian interests.”

Prior to Sisi’s visit to Chad, the Egyptian Ministry of Defense signed a joint military and security cooperation protocol with Chad on Aug. 2. Also, the Arab Organization for Industrialization expanded the export of military equipment to a number of African countries. This highlights direct cooperation between African countries to promote military capabilities.

The official said, “The rising terrorism expansion in West Africa and deteriorating situation in Libya were behind the shift in the way Egypt deals with African countries at the security level, changing the strategy of distancing itself from areas of conflict and of refraining from taking sides.”

Sisi’s trip was widely welcomed by a number of observers in Egypt who considered it to be a step toward restoring strong Egyptian-African ties, after they were neglected for years under the rule of former President Hosni Mubarak. This was following the attempted assassination of Mubarak in Addis Ababa, Ethiopia, in June 1995, which resulted in Egypt refraining from taking part in African summits at the presidential level.

Ayman Abdel Wahab, a researcher at the Al-Ahram Center for Political and Strategic Studies, told Al-Monitor, “The extensive effort toward Africa would promote Egypt's position in the political, trade and military balance of power in Africa, and in facing the risks to Egyptian interests in terms of the Nile waters — in light of the upstream countries’ aspirations for development and exploitation of the Nile waters.”

He said, “Cairo’s focus on promoting ties with Tanzania and Rwanda — following their harsh stances against Egypt during the Nile Basin negotiations — is designed to break the Ethiopian control over the upstream countries’ positions regarding Egyptian interests.” However, he added, “While it is too early for the balance of interests to be shifted, Cairo does not have enough time to lessen the anticipated harm to its water security, particularly since Ethiopia is nearing the completion of the Renaissance Dam.”

In contrast, during Ethiopian Prime Minister Hailemariam Desalegn's visit to Sudan Aug. 17, the bilateral talks focused on the Nile waters and the Renaissance Dam. This Sudanese-Ethiopian rapprochement started to annoy Egypt, particularly since Sudan is backing up the Ethiopian stance after it was once a strategic ally of Egypt in the Nile waters dossier.

Hani Raslan, an expert on African affairs, told Al-Monitor, “Egypt now needs to try to break the Ethiopian alliance with the Southern Nile Basin countries against the majority — in addition to [breaking] the mobilization against Egypt, which was promoted by the Ethiopian claims on Egypt’s absolute sovereignty over the Nile waters. The Egyptian quest for a rapprochement does not need to necessarily result in an alliance with the Nile Basin countries. Yet at least to do without enemies.”

The Egyptian political administration has no option other than to work in the long run to maintain its direct interests in the region and secure its basic Nile water resources in particular. This dossier is one of utmost complexity, as the upstream countries insist on exploiting the resources, based on the principle of fair and equitable use of the Nile waters.