Politically besieged Doha is moving closer to Iraq, which raises concerns about the future of the Iraqi opposition residing in Qatar. 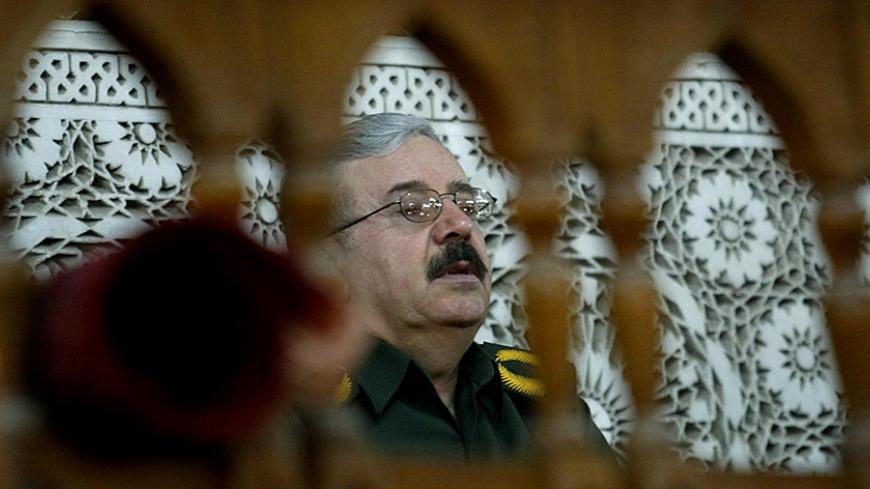 Naji Sabri al-Hadithi prays in a Baghdad mosque during his last days as Iraq's foreign minister during the US-led invasion of Iraq, April 4, 2003. Sabri, who served under Saddam Hussein, now lives in Qatar. - REUTERS/Goran Tomasevic

BAGHDAD — Qatar's relations with Iraq, which have been expanding since Qatar recently found itself shunned by its fellow Gulf countries, are raising questions about whether Doha will continue to host opponents of Iraq's government.

There are also other Iraqi figures in Qatar, such as Abdul Hakim al-Saadi, brother of Abdul Malik al-Saadi, who is considered the most prominent Sunni cleric in Iraq; Tariq al-Hashemi, the former vice president whom Iraq convicted of terrorism; and other academic and military oppositionists.

A source in Doha close to the opposition told Al-Monitor by phone on condition of anonymity, “The figures affiliated with the Iraqi opposition in Doha don't carry out activities to demonstrate they are part of the opposition ... but they do include prominent figures such as Hadithi, Hashemi and Saadi.”

The source added, “Some of those residing in Doha who are known to oppose the current [Shiite-led] Iraqi regime are linked to the Baath Party, others to Sunni religious authorities and some to the Association of Muslim Scholars headed by Muthanna Harith al-Dhari.” The association supports Sunnis in Iraq. “The Qatari government has placed some conditions preventing Talfah and Yassin from carrying out any political activity in opposition to Iraq."

In an interview with Al-Monitor, Abdul Hakim al-Saadi, who rejects the Iraqi regime, implied there is no organized opposition in Qatar. “There are national figures hosted by Doha who have no political activity," he said. "Their presence there is only subject to their commitment to the Qatari laws because Qatar does not support Iraqi groups under the opposition’s name.”

Saadi denied all allegations that Qatar is assisting the Iraqi opposition or at least providing logistical support for it to hold meetings there. However, conferences have indeed been held in Doha under the opposition’s name. After one such meeting in September 2015, the Iraqi Ministry of Foreign Affairs summoned the charge d'affaires of the Qatari Embassy in Baghdad.

As for Qatar's "support" of Iraqi opposition on its soil, Likaa Mekki, an Iraqi opposition journalist based in Doha, told Al-Monitor, “The concept of support is relative here, and it is also important to distinguish it from [forming coalitions] against the government. Qatar has officially expressed its friendship with Iraq, and there is no official Qatari support for an Iraqi opposition faction or figure."

Meanwhile, he said, "The unpublicized support reflects ... Qatar is among countries that support a 'Sunni project' in Iraq, which means it is part of regional arrangements that are somewhat related to supporting the Iraqi government." The term "Sunni project" is often used to refer to efforts to assist Iraqi Sunni parties in establishing a political plan for their areas in cooperation with the Iraqi government.

"There may be contact with other opposition parties, but the most important choice Qatar has made is to only deal with peaceful opposition.”

Akram al-Mashhadani, a former Iraqi police general who lives in Doha, told Al-Monitor, “Qatar cannot change its decision or position regarding the Iraqis on its soil and hand them over at Baghdad’s request. This is particularly true because the Qatari Constitution stipulates that no person seeking asylum shall be handed over to their country of origin.”

Qatar probably doesn't want to take the same step the Iraqi government took when it deported members of the Mujahedeen-e-Khalq of Iran and gave up a card it could have exploited to strong-arm Iran. Doha will not be deporting any Iraqi opposition member at Iraq’s request because the opposition can always be used as leverage.

Doha will remain an important location for the Iraqi opposition, if not a center of support for it, especially for the Sunni Islamic parties that draw from the Muslim Brotherhood ideology, because the opposition is not only a pressure card on Iraq but also on Qatar's fellow Gulf Cooperation Council members.

In the end, Doha will not agree to hand over Iraqi opposition figures to negotiate an improved relationship. Instead, it will bridge the gap when it chooses, since Qatar is one of the countries supporting the Sunni region project.