Pentagon wants to build new US facilities in Iraq, Syria

The Trump administration has asked Congress for the authority to build new “small-scale,” “temporary facilities” to help defeat the Islamic State. 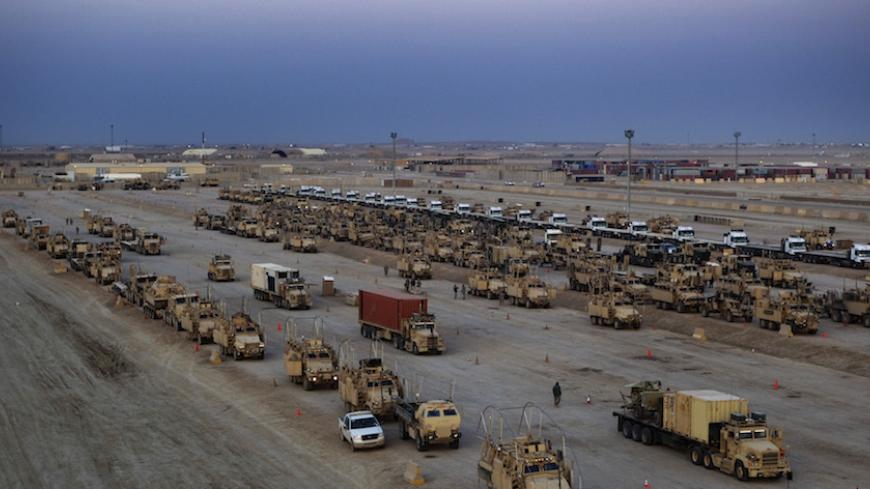 Vehicles of the 3rd Brigade Combat Team, 1st Cavalry Division line up for the departure of the final convoy of US military forces out of Iraq at Camp Adder near Nasiriyah, Iraq, Dec. 17, 2011. - REUTERS/Lucas Jackson

The Donald Trump administration is pushing Congress for the authority to build new “temporary” facilities in Iraq and Syria as part of the US-led campaign against the Islamic State.

In a policy statement released Tuesday night, the White House argues that US troops are hamstrung by legal restrictions on their ability to expand US military infrastructure “in both Iraq and Syria.” The administration wants lawmakers to extend existing authorities that only cover the “repair and renovation” of facilities to also encompass “temporary intermediate staging facilities, ammunition supply points, and assembly areas that have adequate force protection.”

“These facilities, supply points, and assembly areas will enable the pursuit of [IS] into the Euphrates River Valley and help improve the security of Iraq’s borders,” the statement reads. “Current authorities … severely limit the coalition’s maneuverability and its ability to respond quickly to changing operational conditions.”

Tuesday’s Statement of Administration Policy, which the White House uses to present its views on pending legislation, takes the House Armed Services Committee to task for not including the change in its annual defense authorization bill released last month, although it is not clear if lawmakers had received the request from the Pentagon in time. The Senate Armed Services Committee draft, released this week, does, however, include the requested change. The House began floor consideration of the bill Wednesday.

The added flexibility would enable the Defense Department to go on the offensive to root out IS safe havens in Iraq and Syria, according to Corri Zoli, the director of research at Syracuse University’s Institute for National Security and Counterterrorism.

“It looks to me like what they’re trying to do is get a little more maneuverability to create some infrastructure for deepening the fight beyond Raqqa and Syria,” Zoli told Al-Monitor. “It’s kind of an attempt to create a lily-pad structure in the Levant to go after [IS] and their entrepreneurial efforts to start miniature caliphates in the region.”

Defense Secretary James Mattis, Zoli added, “is thinking a couple steps ahead. He wants to win the peace, stabilize the region and militarily pressure Iran. If he can do it with logistics all the better.”

But detractors say the effort could further draw the United States into Syria’s complex civil war, even as Congress continues to resist launching a full-fledged debate over updating the 2001 use of force authorization that remains the main legal justification for US involvement in the region.

“The concerning part is how this fits in with the bigger picture,” said Kate Gould, the lead Middle East lobbyist at the Quaker group Friends Committee on National Legislation. “The US is shooting down Syrian warplanes and Iranian-made drones and launching cruise missile attacks. It opens the spigot for them to establish those kinds of facilities and further entrench the US military presence in Syria for this unauthorized war.”

Tuesday’s White House statement comes as the US-led coalition in Iraq and Syria looks to accelerate military operations against IS. Earlier this week, Lt. Gen. Stephen Townsend, the US commander leading the effort, said the campaign is now expected to expand into the Euphrates River Valley after Iraqi forces retook Mosul last week. Townsend acknowledged that a continued US military force presence in the region could include the use of temporary facilities set up on an ad hoc basis, such as those proposed by the administration, but would mostly draw upon existing bases.

While Pentagon officials have publicly downplayed the need for more outposts in Iraq and Syria, the move would shift away from defense authorization bills going back nearly a decade. Those bills largely sought to remove language associated with nation-building and create limits on foreign military interventions following the public backlash against the war in Iraq.

The 2008 defense authorization bill signed into law by President George W. Bush first sought to limit funding for permanent basing in Iraq following the signing of a bilateral status of forces agreement that called for the removal of American troops by 2011. Congress reaffirmed those limits in the 2012 and 2015 defense bills, providing some authority for stability operations, but retaining boundaries on permanent basing.