Tourists are returning to Mosul's Hammam al-Alil spa, which used to attract thousands of people to its healing waters before the Islamic State took control of the city. 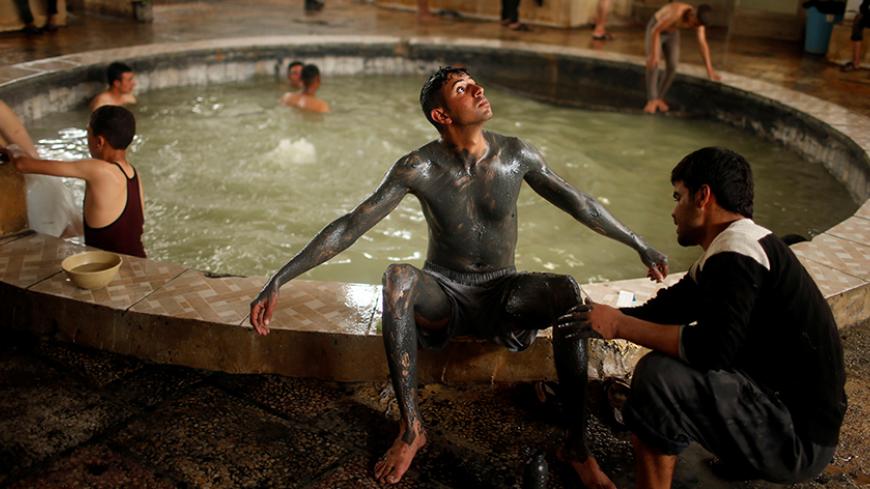 An Iraqi boy is covered with sand from a sulfur pool at Hammam al-Alil south of Mosul, Iraq, April 3, 2017. - REUTERS/Suhaib Salem

The Hammam al-Alil spa — historical baths near Mosul — has hosted an average of 200 people every day since its reopening in April. But this is still a far cry from its days of glory, when thousands of people came to the hot springs and the beautiful scenery around it every day.

The clientele, mostly locals and the soldiers in the region, pay an entry fee to the spa of 1,000 Iraqi dinars, about 85 US cents.

Hammam al-Alil, which literally means “bath of the ailing," is 21 miles (34 kilometers) south of Mosul. The town was liberated Nov. 5 from the control of the Islamic State (IS), which captured it in June 2014. After the liberation, the Iraqi fighters who liberated the town were the first to bathe in its hot springs, and photos of their doing so circulated in the media. Then, displaced people from Mosul and Iraqis from other parts of the country started flowing into the area to enjoy the spa’s sulfur springs, mud baths and the beautiful scenery without waiting for a full restoration of the spa and the town.

Before IS' occupation of the area, Hammam al-Alil spa was a major attraction for health tourism, with visitors coming from inside Iraq and abroad, according to the director of the Hammam al-Alil district, Khalaf al-Jabbouri.

Jabbouri told Al-Monitor, “The visitors’ first destination in the area is to the spa and the treatment center; then, re-energized, they go sightseeing and join tours of the picturesque natural surroundings. The area used to receive thousands of visitors a week.”

“The revenue from health tourism was a major contributor to the city’s economy before the IS occupation. There were projects to expand and develop the spa, adding saunas and modern hotels, as well as bringing in specialists in medical treatment and establishing sophisticated treatment centers,” he said.

But now the town and the spa need a major overhaul before they can get back to their pre-destruction state and attract more visitors. He said now that the town is liberated, "the resorts are attracting more and more people. If the security in the region improves, we can have an average of about 500 people a day. If each visitor pays about a dollar for the entry fee, which is a modest amount, we can return to the heyday of the spa,” he said.

Jabbouri said it is inevitable that the refugees who now use Hammam al-Alil will be replaced by tourists. “There are hundreds of refugees who have fled from IS to Hammam al-Alil camp. They visit the spa for treatment, overcrowding the place for tourists,” he added. “When security and stability are restored across Ninevah province, the displaced will return home and the military presence in the city will decrease. This, in turn, will boost tourism.”

His target is to reach 1,000 tourists a month, which he thinks can happen if the area, greatly damaged by IS and the war against the Islamist forces, can be completely rehabilitated.

Faleh al-Shammari, head of the Ninevah Antiquity Department, underlined that the presence of the spa has in the past boosted the number of tourists visiting archaeological sites nearby. “Al-Alil spa contributed to the increased numbers of visitors to Ninevah archeological sites. People who visit for medical tourism dedicate part of their itinerary to visit historic landmarks,” he said.

“Sulfur springs have existed in northern Iraq since ancient times, and people started using them after they found out their effect in the treatment of diseases,” Shammari said. “The ancient inhabitants of Ninevah, according to historical information and writing on artifacts, used to visit the springs in Hammam al-Alil to heal themselves, especially in times of epidemics and wars.”

Shammari said the sources of mineral waters are under the Tigris River, from where water emerges to the surface through several springs near the riverbanks. The outflowing water is nearly boiling. “These waters have existed for hundreds of years in the area. The authorities established the medical treatment spa to benefit from the hot springs. The resort was built in the 1970s and has spacious halls and water-fed pools from the springs through pipes and pumps. There are separate rooms for men and women,” he said.

Shammari added, “People are also keen on visiting archaeological sites in Hammam al-Alil, most notably Tal al-Sabet, which is rumored to help young women get married sooner rather than later.”

Some scientific studies maintain that the sulfur water in different regions of the world contains dissolved minerals, considered an appropriate treatment for many chronic diseases such as rheumatism, arthritis and some skin diseases such as psoriasis. Some studies indicate that the waters might also help stimulate blood circulation, heal wounds, sterilize the body from germs and relax muscles.

Younis Mahmoud Abdullah, an employee at the water treatment center in al-Alil Spa, told Al-Monitor that both the baths and the town need work to restore the old times. “Some necessary work needs to be done, such as getting rid of weeds, reforestation, restoring old buildings and the Corniche road along the bank of the Tigris. Should the situation remain the same, the number of visitors will remain low,” Abdullah said.

Nahla al-Hababi, a legislator for Ninevah, told Al-Monitor that the spa resort needs a “facelift” through strategic planning. “The pictures published by Reuters showing people bathing in natural hot springs shifted the world’s attention to the historical springs,” she said.

“Another project is underway to restore al-Alil spa, turning it into a tourist attraction, with special emphasis on health tourism, including expanding its rooms, renewing the pipelines, restoring hotels and establishing hotels, in addition to linking the different resorts with modern pathways along the banks of the Tigris River,” she added, noting that this would boost tourism and create job opportunities for the locals who suffered under the fighting.