What a drag: Egypt’s smokers feel burn of price hikes

Cigarettes are getting more expensive in Egypt thanks to rising production costs spurred by the government’s economic reforms. 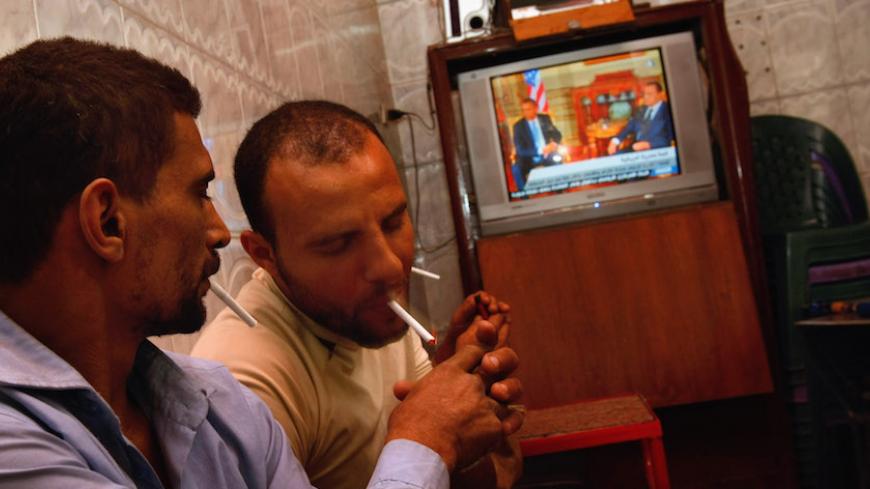 An Egyptian man lights up another's cigarette as they watch US President Barack Obama's meeting with Egyptian President Hosni Mubarak on TV in a coffee shop in the Islamic old city, Cairo, Egypt, June 4, 2009. - GETTY/David Silverman

More businesses and their cash-strapped customers are feeling the heat from a deal Egypt struck in November with the International Monetary Fund (IMF) for a critical $12 billion loan.

Currently, tobacco companies and smokers are taking a hit.

Eastern Company, Egypt’s only native manufacturer of cigarettes, has increased prices on some of its cheapest, most popular cigarettes due to rising production costs. The company blames a combination of challenges brought about by the government’s IMF-mandatory belt-tightening: an increase in fuel and electricity prices, a value-added tax hike and the November pound flotation.

Company Chairman Mohamed Othman Haroun noted that raw materials that had been imported at an exchange rate of 9 Egyptian pounds to the dollar before the pound floated in November have now dramatically increased.

“The price rise was needed because the company now had to import at a rate of 18 pounds per dollar,” he told Reuters.

Ibrahim Embabi, the head of the Tobacco Industry Section at the Federation of Egyptian Chambers of Commerce, also blamed cigarette price hikes on rising production costs from the government increases in fuel and energy prices, and the value-added tax.

In June and July, Egypt edged up fuel and electricity prices as part of what will be substantial increases required for the IMF loan.

In addition, the Finance Ministry said it will increase its tax revenues from the tobacco industry during fiscal year 2017-2018 to reach 54 billion Egyptian pounds (about $3 billion) with the aim of closing the gap in the state budget.

Economists predict cigarette prices will rise dramatically. Because of this, Embabi said, tobacco sales are expected to drop 5%-10%.

According to Finance Ministry data, the tobacco industry is Egypt’s second largest income source, after the Suez Canal’s roughly $5 billion in revenue every year. The government said it expects to collect taxes from tobacco worth around $2.35 billion in the fiscal year that just began July 1. Much of that will come from foreign companies working in Egypt's tobacco industry, which include JTI, Imperial Tobacco, Philip Morris, British American Tobacco and a number of producers of moassel, a tobacco containing molasses that’s used in hookahs.

Ahmed Ragab, a tobacco trader in Heliopolis, said that before the announcement of any increases in cigarette prices, merchants had been stockpiling several types of cigarettes. “The stockpiling is still going on because there are still other types of cigarettes whose prices have not been raised, and there are expectations that the government will announce [those] price increases soon,” he told Al-Monitor.

Economist Ahmed el-Shami, meanwhile, said increasing taxes on tobacco will greatly contribute to the state coffers and help the government close the budget gap for fiscal year 2017-2018. However, he added that such a move can also increase the smuggling of substandard cigarettes into the country.

“That is why the government has to announce a suitable increase that will not give way to the smuggling of low-quality cigarettes and that will, at the same time, help tobacco companies reduce the losses they have incurred since the November pound flotation,” he told Al-Monitor.

Some tobacco smokers say that they will cut their cigarette use after the increases. “It will be tough to afford luxuries in the coming days. [Cutting] consumption has now become a must,” said smoker Am Hosni.