The House passed legislation today that could impact US-Russia cooperation on Syria and curb Russian arms sales to the Middle East. 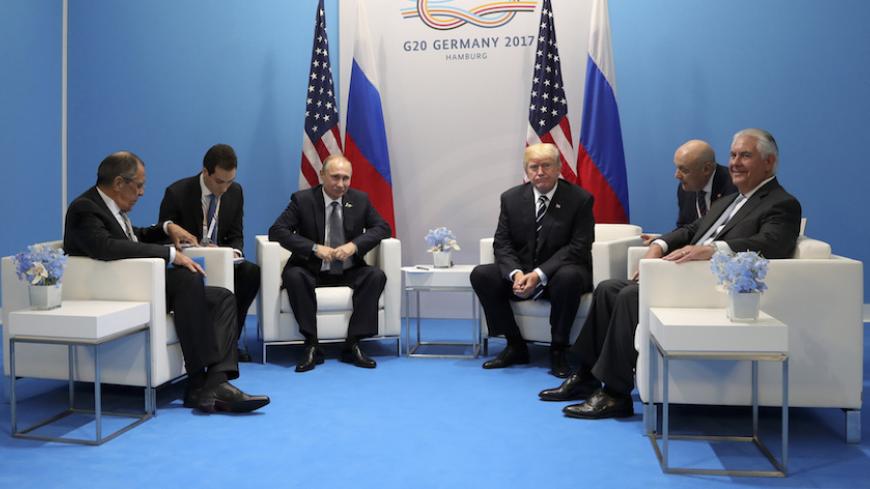 WASHINGTON — New sanctions legislation overwhelmingly passed by the House today would constrain President Donald Trump’s ability to offer Russia sanctions relief for cooperation on Syria and other hotspots. But the bill is focused more on Russian actions in Ukraine and interference in the 2016 presidential election, former US government sanctions officials said, and less directly on Russian actions in Syria, where the two countries have increased cooperation in recent weeks on a cease-fire deal.

“It is very significant,” Edward Fishman, a former State Department policy-planning office staffer and sanctions expert, told Al-Monitor. “The broadest thing that the bill does is that it locks in all of the existing sanctions on Russia from 2014 when Russia first invaded Crimea.”

“The two real issues that this bill highlights in terms of Russia’s behavior are Ukraine … and cyber,” Fishman, now with the Atlantic Council, said. “But Syria — this is not a bill to sanction Russia for its actions in Syria.”

“There were attempts to do that in the past, but those of us in the Russia/Europe policy community were skeptical, [because] our Syria policy is anything but straightforward.”

Still, the new legislation would shape and limit the potential for US policy toward Russia to become more friendly unless Congress becomes convinced that Moscow has significantly changed its behavior.

When the United States first sanctioned Russia for its invasion of the Crimean Peninsula in 2014, Russia had the eighth largest economy in the world and was the world’s leading oil producer. Russian President Vladimir Putin “always thought the West didn’t have the staying power on sanctions,” Fishman said. “Basically because Western oil companies and banks had so much money at stake in Russia, [Putin thought] if he can hold out for a few years, the sanctions will evaporate.”

“What this bill does is preclude that from happening,” Fishman said. “Without exaggerating, it is an incredibly significant piece of legislation. US policy [on] Russia is not going to be friendly so long as this is the law of the land.”

Currently, sanctions on Russia are based on a number of executive orders, “so if the president wanted to, he could cancel all the sanctions with the stroke of a pen,” Fishman said.

The new bill would prevent him from being able to do that. “It codifies all of the existing sanctions, Ukraine sanctions and sanctions [former US President Barack] Obama put in place at the end of 2016” to punish Russia for its interference in the US presidential campaign, Fishman said.

“Then it sets up a mechanism [that] says, if there is any significant easing of sanctions, a congressional review period is immediately triggered,” Fishman said. “It really is quite strong.”

While not focused on the Middle East, the new bill could interfere with the sale of some Russian defense equipment to the region, former State Department sanctions official Peter Harrell told Al-Monitor.

“Right now, there are a couple of Russian defense and intelligence companies individually blacklisted by the US,” said Harrell, who is now with the Center for a New American Security. “With this bill, any company — whether a US or foreign company — doing business with the Russian defense and intelligence sectors’ [designated] major companies would face US sanctions.”

“As a result of some amendments added … Congress has created a little bit of flexibility so the administration can negotiate with countries like Egypt, India, the Czech Republic … that buy Russian military equipment to wind [those purchases] down,” Harrell added.

The bill does have a section dealing with Syria. Section 234 of the bill says the “President shall impose on a foreign person the sanctions … if the President determines that such foreign person has … knowingly exported, transferred, or otherwise provided to Syria significant financial, material, or technological support that contributes materially to the ability of the Government of Syria to (A) acquire or develop chemical, biological, or nuclear weapons or related technologies; (B) acquire or develop ballistic or cruise missile capabilities; (C) acquire or develop destabilizing numbers and types of advanced conventional weapons; (D) acquire significant defense articles, defense services, or defense information.”

Another section calls on the president to impose sanctions on person(s) he “determines knowingly … engages in a significant transaction with a person that is part of, or operates … on behalf of, the [Russian government] defense or intelligence sectors.”

The sanctions legislation language regarding Russia’s support for the Syrian regime of Bashar al-Assad offers the US administration some flexibility, Harrell said.

“Looking at the Middle East, I think the sanctions … on purchases of [the] Russian defense kit … will be an area of impact,” Harrell said. “On sanctions directed at Russian support for Assad, how that plays out depends on how aggressively the Trump administration implements them.”

“With this administration,” he added, “who knows?”

Note: July 25, 2017. This article has been updated with a comment from White House Press Secretary Sarah Sanders.