An attempt to spread Ramadan cheer backfires as Turkey's Islamists are not happy with a controversial TV show involving competition to recitate the Quran. 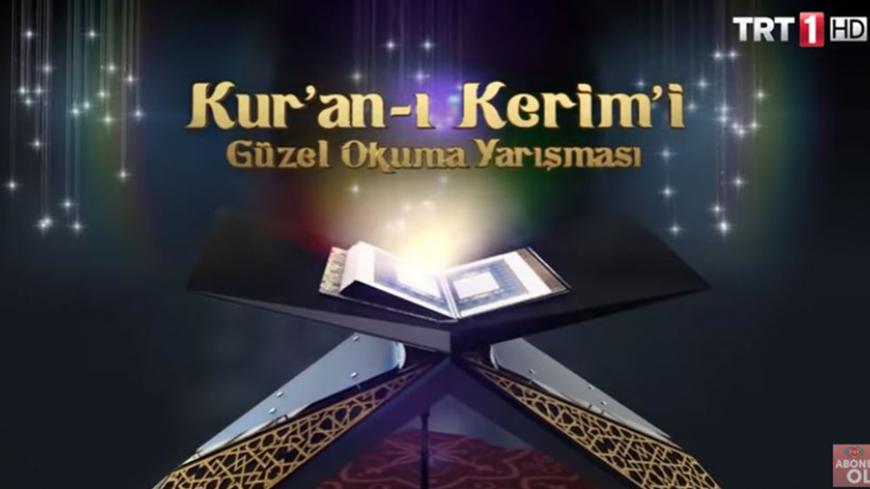 A screenshot shows the introduction to the Turkish television competition for Quran recitation, uploaded May 17, 2017. - YouTube/TRT Televizyon

Each year the month of Ramadan arrives in Turkey with the special flatbread (pide) and increased competition among TV channels for popular Ramadan shows. This year, however, a new Ramadan show where men compete in reciting the Quran has generated strong opposition from Islamist groups.

At the end of March, the program sought competitors known as hafiz — those who are studying the recitation and memorization of the Quran. The requirements were to be a male older than 15. Whether or not female candidates should be allowed to compete was only questioned by secular groups.

The show, a production of state-owned Turkish Radio and Television (TRT), is airing every night with five competitors and three or four judges until the 27th night of Ramadan (Night of Decree, Lailatul Qadr) on June 21. Each competitor introduces himself and his background, and then recites verses from the Quran for some seven to nine minutes. The presenter of the show refers to the competitors as nightingales, birds known for their beautiful singing voice.

Several commentators likened the competition to shows such as "American Idol," where judges' harsh comments help bring about high ratings. In Turkey, however, the judges' methods of critique and grading have attracted the ire of Islamists. The judges were slammed for two main reasons: focusing too much on melodic aspects and for imposing an ultra-nationalist reading style upon the candidates. Some of the judges are employees of Turkey's Religious Affairs Directorate (Diyanet).

At the end of each show, the scores of the judges and the audience are added up and a winner is announced. Each participant is given one gold coin, and the winner gets five gold coins. Then there are weekly winners, and at the end these winners will compete against each other. The final winner will win 50 gold coins.

Teachers of the Quran and other experts on Islam told Al-Monitor that the greatest cause of their anger about the show was the awarding of gold coins. In interviews conducted June 2-5, all basically agreed with the statement of one interviewee that “reading and listening to the Quran is for the sake of God. No material benefits can be gained. This is not acceptable.”

On June 7, due to deep concerns among pious Muslims of Turkey, head of the Religious Affairs Directorate Mehmet Gormez spoke out against the competition. He said, “A new competition program has taken place, as you know. Let me just say that the Quran is not a book of lyrics to be used for singing competitions.” His statement, in a nutshell, concurred with the results of Al-Monitor’s interviews with the diverse group of Islamic scholars.

Abdullah Imamoglu, a respected theologian, author and columnist for Koklu Degisim journal, told Al-Monitor that the Prophet Muhammad was vigilant about the proper recitation of the Quran but that this was by no means meant to be a musical show. Imamoglu was concerned, along with other scholars, that the show's judges focused too much on musical aspects. Indeed, the judges sing nasheeds (Islamic songs) to provide examples to the competitors on how to properly perform. Scholars said using the holy book for entertainment as part of a show-biz style performance is a source of deep embarrassment; one scholar event referred to the spectacle as Quran-tainment.

Regular audiences, according to social media, seemed more worried about other issues, including more personal religious ones. Some wondered whether they could lie down while watching this show or if they needed to sit straight in respect, whether or not women should be covering their hair while watching or whether they should observe ablutions (the Islamic ritual of washing before prayer). Others were angry about the decorations; for example, some of the images were interpreted as resembling the Christian cross or the Jewish Star of David.

Another issue that was debated intensely was whether the judges were justified in insisting that competitors utilize Istanbul-style recitation. Since the Syrian civil war began, Turkey has become home to millions of Arab refugees. Some of these refugees have become informal Arabic language or Quran instructors all over Turkey.

Indeed, the show makes reference to the Arabic term "Tilawah al Quran," which essentially means the reading of the holy book; the exact meaning of the word "tilawah" is difficult to translate, and this was the first time millions of Turks have heard the word adopted in Turkish.

In January, Diyanet said there are 126,500 hafiz in Turkey; however, most Islamic scholars say the numbers are much higher. In the last decade, there has been an exponential growth in the number of children studying the Quran after the age of 10 or 11. The younger generation is more interested in learning Arabic and also is more likely to be taught by either native Arabic speakers or Turks who have studied the Quran and Arabic in Egypt or in Gulf countries. This has created a gap between the older generations that dominate Diyanet and young students of Quran recitation over which style is better or more appropriate. This rift was visible in the show as well.

Imamoglu said, “The age-old debate between Cairo style and Istanbul style has returned. We see that in the recent years the interest and ability to recite the Quran in Cairo style is gaining the upper hand in Turkey. The Quran’s original language is Arabic; therefore, the proper recitation needs to abide by the rules of intonation and pronunciation of the Arabic language. However, the judges are clearly critical of the Arabic style. For example, when one competitor put one hand over his ear to concentrate better and hear his voice clearer, one of the judges warned him, saying, ‘This is not appropriate. It is not in our tradition.’”

The ultra-nationalist tone of the competition was another sore issue for Islamists. Imamoglu summarized what all Islamic scholars Al-Monitor spoke with agreed upon, that “the show’s underlying tones, presentation and the judges’ attitudes all are centered upon nationalism. Yet Islam considers nationalism haram [forbidden].”

Sadly, the program, advertised as “a festival of the Quran for Ramadan,” is ridiculed as a reality show resembling "American Idol" and "Arab Idol." Although the program was state-funded, aired on state television and prepared by prominent Diyanet figures, within 10 days it was publicly criticized and disowned by Diyanet's director. The show's ratings were rather low as well, 79th out of 100 on May 28. The reason for the director’s harsh rhetoric is most likely the strong reaction from Islamists.

It appears that the ruling Justice and Development Party is failing to gauge the impact of its own policies. For example, this kind of a show was expected to be a source of anger and resentment for secularists and hence lead to a rally-around-the-common-cause effect for Islamists. However, secular groups did not seem to care much about it, while pious Muslims have been vocal on social media about their deep resentment about how non-Islamic the show is. Most well-educated and observant Muslims dismissed the show, essentially saying, “This is what populist Islam has come to in Turkey; it is not for us.” Now that Diyanet has officially disowned the program, it will most likely fade away next Ramadan.