Turkey's TV channels promote their shows and entertainment programs in the runup to Ramadan, revealing rifts among moderate and more pious Muslims, as well as the battle between the Justice and Development Party and the Gulen movement. 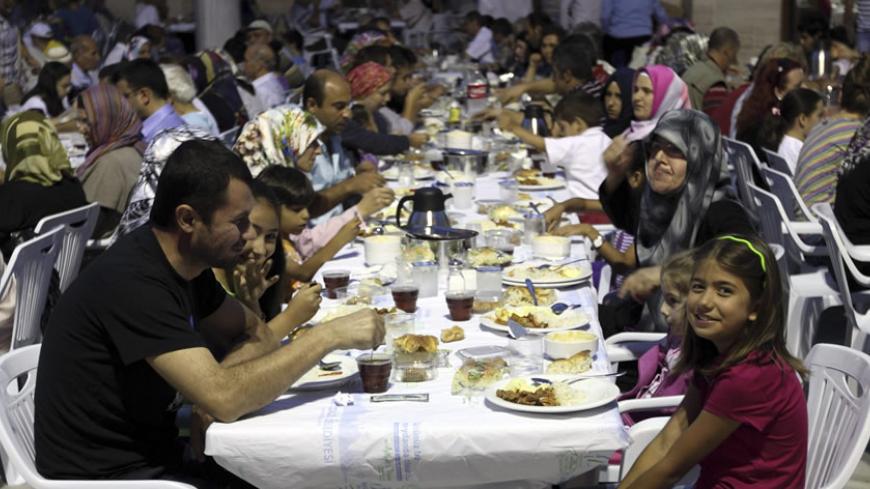 Turks break their fast in Beylikduzu, a district of Istanbul, Aug. 1, 2011. - REUTERS/Osman Orsal

Ramadan is the holiest month for Muslims and will begin this year in Turkey with the evening prayer June 17. The first day of fasting will be June 18 and Eid-al-Fitr, the three-day holiday marking the end of Ramadan, will start July 17.

Ramadan is the Arab world's most important month for TV programming, and the TV networks' battle to provide the most popular Ramadan TV show is now taking place behind closed doors. Almost all TV networks in Turkey have revised their daytime and evening programming for the Ramadan season. Some TV networks have started publicizing their Ramadan programming schedule.

Al-Monitor spoke with a seasoned Ramadan TV program producer, who asked to remain anonymous for fear of losing his job, about these shows. He said, “For years in the media there has been a subtle struggle between the suit-and-tie preachers and religious garb, turban-wearing preachers. Suit-and-tie preachers are frequently senior professors of theology, while [those wearing religious garb] are preachers by training and may be leaders of certain religious orders. The latter resent the strong interest from major TV networks for populist scholars. Still, the most popular Ramadan TV show is the one with highly paid professor Nihat Hatipoglu. Last year the exorbitant salary and the bidding wars for his contract with ATV caused an uproar on social media. This year Hatipoglu has signed [a contract] with the same TV channel."

Hatipoglu appears in iftar (breaking of the fast at sunset) and sahur (breakfast eaten prior to sunrise) programs before a live audience. The provocative and sometimes bizarre questions the audience asks him are said to be the main reason for the show's high viewer ratings. Some of the questions asked include: “I eloped with the girl I love, but then I took her back to her family because we decided to ask permission for the marriage. They refused. How can I make them believe it is not a sacrilege?”; “They say it is a sin to bathe your child on a Wednesday, is that true?”; “Is there a special hour for a curse to be most effective?"; “Is it acceptable to have sex with my husband’s uncle?”; and “I pray to be with my beloved, while he is praying to be with his. Now whose prayer will be answered?”

The populist aspect of the shows that are mostly presented by theologians are regarded as unacceptable by the more pious Muslims in Turkey. One prominent imam from Ankara, who is a government employee and asked not to be named, told Al-Monitor, “I believe it is good that TV channels are adapting their programming to the [Ramadan] season, but sadly most are doing it wrong. I feel embarrassed to watch these programs. Although the shows' hosts are theologians, the presentations are not appropriate for Islam. It is diluted Islam and is not acceptable.”

This year, there seems to be a stronger reaction from groups that can be categorized as more radical than most Justice and Development Party (AKP) elites. These pious groups have now started to voice their criticism of populist, softer versions of Islam. For instance recently, Nurettin Yildiz, a prominent member of the ulema, criticized what is advertised as Ramadan entertainment by the AKP’s Istanbul municipality. Yildiz said, “I'm looking at the ad the Istanbul municipality published in newspapers about entertainment on Ramadan nights. Mind you, these are paid for with government money, and I cannot understand how jazz on Ramadan nights can be considered acceptable in Islam.”

Yet, not all religious groups were critical of the AKP and its announcement of Ramadan entertainment. For instance, the IHH Humanitarian Relief Foundation, best known as the owner and operator of the Mavi Marmara flotilla to the Gaza Strip in 2010, issued a Ramadan message asking for unity among Muslims and more charity for its efforts during the holy month of Ramadan.

Diyanet TV — the Religious Affairs Directorate’s TV channel run by the Turkish Radio and Television Corporation (TRT), launched in 2012 — has also ramped up its Ramadan programming. Diyanet TV has said it is ready for Ramadan with special programming for children. It has told Muslims to go to mosques for evening prayers and sermons to recite the Quran, and it encourages youths to attend Quran classes. The Diyanet TV slogan for Ramadan 2015 is, “This is the time to do good, this Ramadan and always.” In addition, Diyanet TV has pledged 10 million Turkish lira (about $3.5 million) in assistance to the needy in Turkey for sahur and iftar meals, and it has committed to provide aid to Muslims in 67 countries around the world.

TRT has also announced that its traditional show Joy of Ramadan will be celebrating its 10th anniversary by visiting different mosques every evening during Ramadan. More devout TV outlets such as Kanal 7 focus on more traditional images of Ramadan such as prayers and helping the poor.

While TV networks are competing to attract viewers during Ramadan, major Turkish companies such as Cola Turca and Turkish Airlines, as well as grocery store chains, have released new commercials specifically designed for broadcast during Ramadan. These Ramadan-specific commercials utilize images, sounds and words that carry traditions and Islamic values of the Ramadan season. Most mainstream media broadcast around-the-clock cooking shows that give advice on the most nutritious foods to eat after fasting for 16-17 hours a day.

However, Ramadan TV shows are not only about sharing and caring and dedicating oneself to prayer and frequenting the mosque. Indeed, the battle is so intense between the government and the opposition that Samanyolu TV, a channel known to be close to the Gulen movement, has reportedly been visited by the authorities to check if its programming is acceptable. In 2014, Samanyolu TV faced legal obstacles in regard to the location of its Ramadan shows. To prevent such constraints this year, the TV station has redecorated its studios so it can record the shows on-site, which has generated suspicion from local authorities.

Amid all this competition, the holy month of Ramadan will start in a few days and Ramadan TV will aim not just to educate but also to entertain Muslims in Turkey.