What's the real goal of Tunisia’s campaign against corruption?

In a supposed anti-corruption move, the Tunisian government arrested eight businessmen, including one charged with treason and endangering the country's safety. 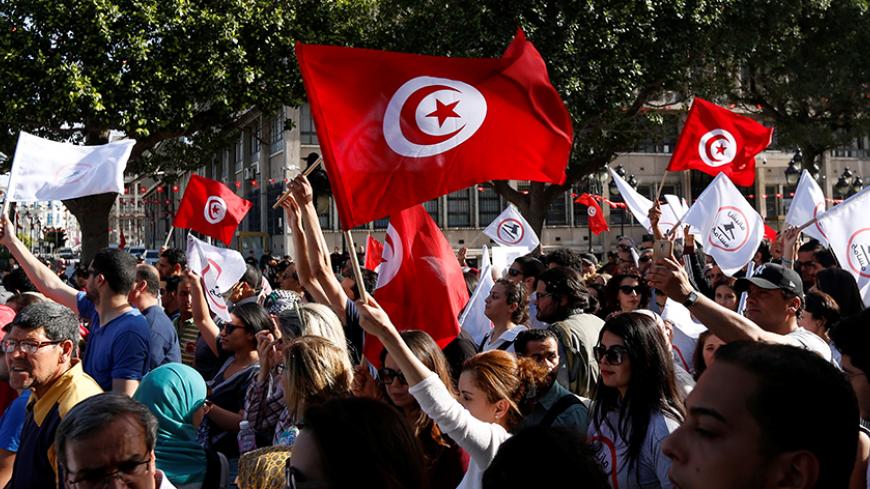 Tunisians demonstrate against a bill that would protect those accused of corruption from prosecution on Habib Bourguiba Avenue in Tunis, Tunisia, May 13, 2017. - REUTERS/Zoubeir Souissi

The Tunisian government has launched what it says is an unprecedented campaign against corruption, arresting eight businessmen May 23 and confiscating their property.

In one case, however, the government went well beyond allegations of corruption: One of the men, Chafik Jarraya, was referred to the military judiciary May 26 for alleged treason, breaching state security and being at the disposal of a foreign army — a crime punishable by execution. Jarraya’s lawyer, Faisal al-Jadalawi, said in a press statement June 1 that the accusations against his client have no legal grounds and can be classified as political score-settling.

Some members of the public and several political parties and civil society organizations declared their alignment with the government. However, some Tunisians worry that the government engineered the campaign merely to garner public support following protests last month in Tataouine during which a young man was run over and killed by a police car. Also, citizens have been protesting a proposed law that would grant amnesty to those accused of corruption under the administration of President Zine El Abidine Ben Ali, who was overthrown in 2011.

Abdul Latif Haddad, a political activist and member of the Tunisian General Labor Union, believes the timing of the anti-corruption campaign caught people off guard. He told Al-Monitor, “The government is smartly capitalizing on [its powers under] the state of emergency in the country," which was imposed 1½ years ago in the wake of a suicide attack that killed 12 presidential security officers in the capital, Tunis. On May 16, the Tunisian presidency extended the state of emergency for another month.

Optimism about the anti-corruption campaign waned somewhat, Haddad said, when the security-related charges were filed against Jarraya. The security issue overshadowed the corruption angle and spawned "fears that the campaign might become a selective, superficial process or a settlement of [political grudges], leaving the corruption ghost and its toxic cells safe and sound."

The government and judiciary did not make any official statements about the accusations against the arrested men, except for a brief statement May 24 by Prime Minister Youssef Chahed, who said unchecked corruption would doom the country. “There's no choice. It's either corruption or the state. Either corruption or Tunisia. I have chosen the state and Tunisia,” Chahed said.

Security authorities continued their arrests and on May 30 seized Saber Ajili, the director of the touristic security department at the Ministry of Interior and former director general of the counterterrorism unit. Authorities said Ajili is linked to Jarraya’s case, but they gave no details about the nature of the men's relationship.

Abderraouf al-Ayadi, the head of the Tunisian Wafa Party, said in a June 1 press statement that he doubts the seriousness of Chahed’s government in fighting corruption, saying the arrests are "part of the ruling party Nidaa Tunis’ plan to settle accounts.”

The party is suffering serious internal conflict, and some parliament members allege the arrests — particularly of Jarraya — are designed to exacerbate the rift and damage the reputations of parliamentarians with ties to him.

Haddad believes the plethora of potential explanations for the government’s campaign comes from a “lack of official and reliable information.” He said there is “unmistakable inconsistency between the campaign’s slogan — the war on terrorism — and its actual work, which was marked by two waves."

"The first wave created a buzz due to the arrest of smuggling lords and heads of some corruption lobby groups; the arrested businessmen [supposedly] have a record of smuggling and engaging in illegal economic activities," he said. “The second wave pointed fingers at some figures for breaching state security and spying for a foreign army. This is a dangerous deviation from the corruption case, which now becomes a matter of military and security intelligence."

Independent political analyst Abdul Sattar al-Ayidi told Al-Monitor, “The government campaign against some businessmen accused of corruption reveals a conflict within the ruling party. Many of those arrested are known in local political circles to be close to a faction within Nidaa Tunis, especially Jarraya."

He added, “Although Chahed is a member of Nidaa Tunis, he decided to settle the disputes by arresting the said figures, reportedly with the support of the president. Thus, [Chahed] achieved more than one goal: On the one hand, he garnered more public and political support for his government, which is facing several economic and political challenges made worse by protests in poor central provinces. On the other hand, he fulfilled a promise he had made when appointed as prime minister in August to fight terrorism." As a bonus, "he was able to weaken the other faction in Nidaa Tunis.”

Regardless of the government’s true intentions behind its campaign against these suspects, it is ostensibly meeting a longstanding public demand to fight rampant corruption in the country.

The campaign comes as the government desperately needs to be saved from the protests that broke out demanding more job opportunities in the oil fields in Tataouine. The government lost political and public support only a year after its inauguration due to the social and economic situation in the country. This anti-corruption campaign will give the government an extra push to carry on, and it has apparently increased Chahed’s popularity and might put him on top of the list of candidates in the 2019 presidential elections. Still, the campaign has vague objectives and intentions amid governmental secrecy.