As Eid al-Fitr approaches, marking the end of Ramadan, Turkish authorities opened two border crossings with Syria so refugees can visit their homeland. 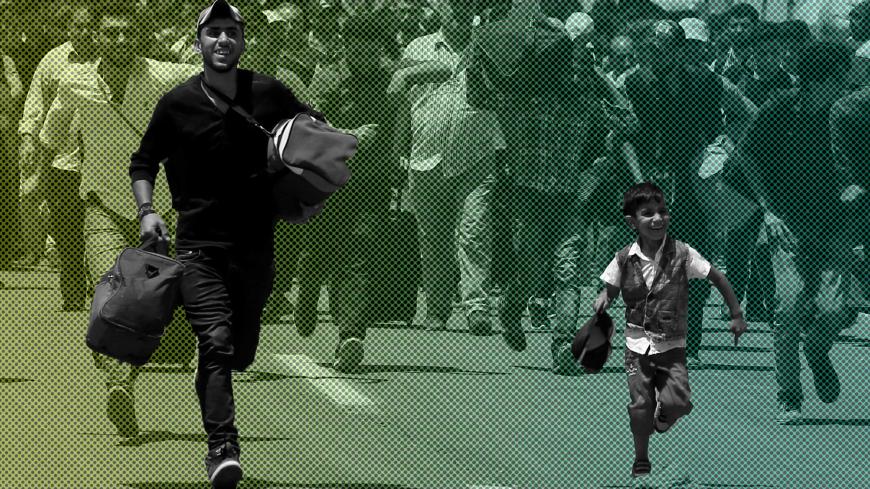 A Syrian boy runs with the others who say they are returning to Syria ahead of Eid al-Fitr, near the Cilvegozu border crossing, Hatay province, Turkey, June 15, 2017. - REUTERS/Umit Bektas

ALEPPO, Syria — Thousands of Syrian refugees in Turkey have rushed since June 1 to the Bab al-Hawa and Bab al-Salam crossings on the Turkish-Syrian border to spend the Eid al-Fitr holiday in their homeland. The dates of the holiday, which marks the end of Ramadan, vary by location and Islamic sect. This year it will begin June 25 or 26.

For Syrian refugees in Turkey, the chance to meet with relatives and visit their homeland is not to be missed, particularly since the border crossings have been closed to civilians and crossing into Turkey illegally has been an almost impossible journey.

At Oncupinar/Bab al-Salam, hundreds of people were crossing into northern Aleppo on June 18.

When the refugees arrive at the Turkish side of the crossing, they are required to complete legal procedures and hand over their temporary protection IDs. At the same time, they obtain a card allowing them to return to Turkey. Then they are bused to the Syrian opposition’s immigration and passport office, where they select a return date, allowing the crossing administration on the Syrian side to organize their return to avoid overcrowding.

Some plan to return; some do not. Speaking on condition of anonymity, a woman from Aleppo told Al-Monitor, “I am definitely returning to Turkey.”

While waiting in the line to register at the passport office, she said that although the Syrian regime regained control over the whole city of Aleppo in late 2016, “The situation is still unstable in Aleppo city. I am going there to check on the house in al-Shaar neighborhood before I come back. I am very happy to be [going] back to Aleppo for the first time since I left in 2012.”

In the Karaj Sajou area, also near the Bab al-Salam crossing, those arriving from Turkey were using public and private transportation to reach their various destinations.

Mohammed Fawzi was waiting for other passengers to take their seats. He was going by bus along with his four family members to Afrin. He told Al-Monitor, “It has been an exhausting journey. It took me 20 hours in the waiting line at the Turkish Oncupinar crossing. It is very hot and overcrowded.”

He added, “Despite the arduous journey, I am glad to be home to meet with my relatives and friends. I can’t tell you how I feel; it's been three years since I came to Gaziantep.”

Asked whether he will be returning to Turkey, he replied, “Sure. I booked to return June 28. I have my sewing atelier there, and my children have their future; they are pursuing their studies in Turkey." However, "I long to settle in Syria one day, when the war is over," he added.

The majority of Syrians have opted for the Cilvegozu/Bab al-Hawa crossing because they can stay in Syria longer. An official there told the Anatolia news agency June 20 that nearly 92,000 Syrians had arrived in Syria using that crossing since early June.

Jabhat al-Shamiya, an opposition group affiliated with the Free Syrian Army (FSA), runs the Bab al-Salam crossing and provides services facilitating the citizens’ movement, such as buses and baggage handlers.

“It's normal to see the big crowds, particularly since the Bab al-Salam crossing had been shut down since March 2015. The people of northern Aleppo [province] long to visit their hometowns, particularly since [the towns] were liberated from the Islamic State organization [IS].”

The FSA, backed by Turkey, expelled IS from large parts of northern and eastern Aleppo earlier this year.

Saleh Asfour, who was returning from Turkey to al-Bab in northeastern Aleppo, told Al-Monitor, “I will get to see my father and family for the first time in three years.”

Asfour arrived in Turkey after IS took control of al-Bab in January 2014. The FSA cleared IS from the area in February.

He added, “I can’t believe that I’m in Syria now. I can’t describe my feeling. … The air smells different here.”