On March 9, Turkish authorities closed the Bab al-Salam and Bab al-Hawa border crossings with Syria, a move some say may be linked to security measures ahead of Turkey’s parliamentary elections in June. 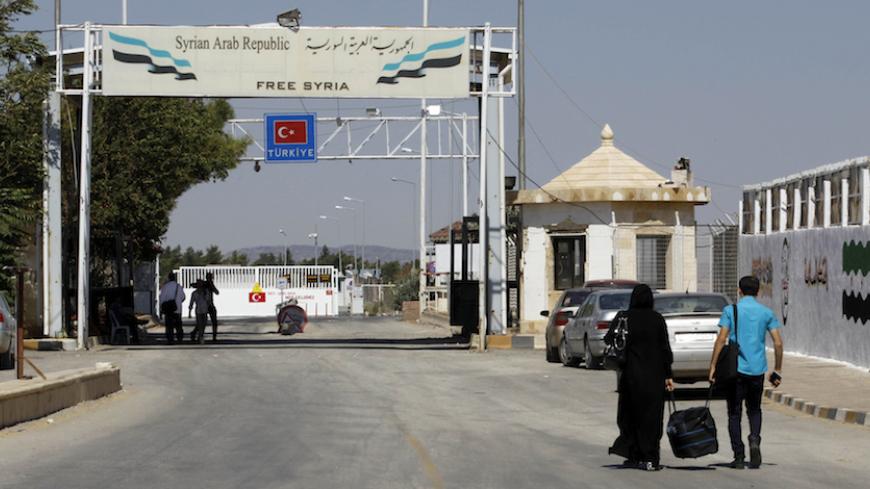 Civilians carry their belongings as they attempt to enter Turkey at the Bab al-Salam border crossing, Sept. 9, 2013. - REUTERS/Molhem Barakat

ALEPPO, Syria — The Bab al-Salam border crossing is no longer bustling with hundreds of people and cars waiting to cross from Syria into Turkey. It has become a quiet place after Turkish authorities decided to close it. A few pedestrians and taxis can be found on both sides of the road, while ambulances sometimes rush by from Syria.

As the decision to close the crossings enters its second week, dozens of people and families sleep in the mosques and in the nearby town of Azaz hoping for the crossings to reopen. The crossing’s Sijo car garage is practically empty, while Abu Mohammad, a man in his 40s, rests on suitcases along with a number of taxi drivers. He talks with them about why the crossing closed and its chances of opening anytime soon.

Signs of fatigue and despair are on Abu Mohammad’s face. He tells Al-Monitor, “I live with my family in the Turkish town of Keles, but I went back to Syria two weeks ago to get some essentials and documents from the old house. And now the crossing is closed. They won’t let me cross. And my wife and kids are alone in Turkey.”

Abu Mohammad works in a clothing workshop in Gaziantep, Turkey. He fled his home in Aleppo's al-Qaterji neighborhood after the barrel bombing campaigns began this past year.

Abu Mohammad doesn’t know what to do. Should he return to his home in Aleppo and leave behind his family and work in Turkey? Or should he risk crossing into Turkey illegally? He packs his bags and, before heading to al-Til along the border, says, “I cannot stay here. I have been away from my family for a long time and I must go back to secure their needs.”

In addition to the border closures, Turkish authorities have further tightened control over the Syrian border. Turkish police intensified patrols along the border, making illegal entry difficult. Many Syrians have resorted to illegal entry because they don’t have regime-issued passports.

On March 12, one person was reportedly killed by the Turkish army during an attempt to cross the border illegally. But Syrians are still risking their lives to reach Turkey.

Al-Monitor asked Mustafa Najjar, the manager of Bab al-Salam crossing, why the Turkish authorities have closed the crossings. He replied, “We don’t know why the Turks closed the crossing. We received information that Bab al-Salam crossing will close from March 9 until further notice. No reasons were given. I cannot predict how long the crossing will remain closed. The matter is in the hands of the Turkish government. But until now they are allowing medical emergency cases and commercial and aid trucks to pass through. And people are allowed to cross from Turkey into Syria.”

In the absence of official Turkish statements regarding the closures, speculation and rumors have spread. Najjar denied that the reason was to pressure the opposition factions to hand over the management of the crossings to the Syrian interim government. He said, “We have not received any requests from the Turks regarding this issue.”

Reports attributing the closures to the intensification of fighting in northern Syria remain questionable, as Aleppo and its suburbs have not experienced an irregular wave of displacement over the past month. On the contrary, the movement of goods and people continued as usual before the crossings were closed, according to Najjar.

The Turkish newspaper Sabah provided more convincing reasons. The paper reported that Turkish intelligence discovered that the Syrian regime was preparing to carry out operations inside Turkish territory ahead of the June parliamentary elections, in a situation similar to the May 2013 Reyhanli bombings in southern Turkey. Turkey blamed the Syrian regime for the bombings, which killed 53 people.

Whatever the reason for the closures, the decision represents an additional obstacle for Syrians, who view neighboring Turkey as a safe haven from the war raging in their country. And until the crossings are reopened, which may take months, Syrians will continue to suffer.