The Palestinian Authority blocked 12 websites affiliated with the Hamas movement and with dismissed Fatah leader Mohammed Dahlan, raising questions about the government’s respect for press freedoms. 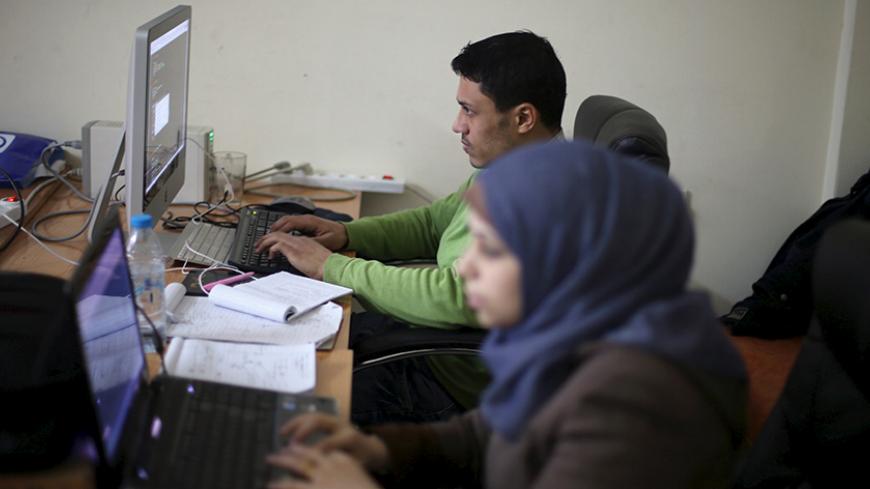 Palestinians were surprised to find on June 12 that they could no longer access 12 websites. The owners of the sites were quoted by multiple sources as saying that the blocks began around 5 p.m., and that when they checked with their web hosts to see what had happened, they were told that the decision to deny access had come from the attorney general’s office.

The office of Attorney General Ahmad Bara offered no public comment or explanation other than to confirm that it had indeed issued the order. A source close to the Palestinian government was quoted by the independent Maan News Agency on June 16 as claiming that the decision was not political.

An article on Maan's website reported, “A senior official from the Palestinian Authority spoke to Maan on Thursday [June 15], denying the reports, saying the websites were blocked due to a number of pending cases against them for reporting false information and being unethical.” The official further said the sites had been accused of “‘forgery’ — publishing false news — and ‘slander.’” No additional details have been made available.

Muntaser Hamdan, a member of the Palestinian Journalists Syndicate, rejected the attorney general's action, calling it a “stark violation” of freedom of the press. “We in the journalist’s syndicate oppose this decision, which violates the Basic Law and is contrary to the commitment made by President [Mahmoud] Abbas last August,” said Hamdan.

On Aug. 2, 2016, Abbas became the first Arab leader to sign a declaration on press freedom. The document, the Declaration on Media Freedom in the Arab World, emerged from 20 months of discussion and debate across the region.

The blocking of the websites is in violation of Item 3 of Article 27 of the Palestinian Basic Law, which states, “Censorship of the media shall be prohibited. No warning, suspension, confiscation, cancellation or restriction shall be imposed upon the media except by law, and pursuant to a judicial ruling.” The Basic Law was ratified by the Palestinian Legislative Council in 1997 and signed by President Yasser Arafat in 2002. It was amended in 2003 and 2005.

Hamdan, who heads the syndicate's training committee, conceded that there is no specific law regulating news websites and that there is a need to improve the sites’ level of professionalism. He insisted, however, ”The decision violates the right of Palestinians to know.”

Hamdan said the syndicate is considering trying to reverse the decision in court. “Since we are unable to obtain any legal justification for this decision that supersedes its being made for political reasons, we have no choice but to fight this in court,” he told Al-Monitor.

The Ramallah-based Palestinian Center for Development and Media Freedoms issued a strong statement June 18 detailing what had happened. It expressed concern about the blocking of the sites and called for the decision to be repealed. The statement read, “This decision constitutes a serious violation of freedom of the press and expression and [the center] calls for the repeal of such measures and practices, which in this day and age of technological developments, is something of the past, and as suppression of voice and opinion is no longer possible in our day and age.”

According to the syndicate, Shamaly was arrested June 8 for a post he published on Facebook criticizing Abbas. No charges have been filed against him, but he is still being held.

Palestine’s press freedom ranking has been eroding in recent years. In the 2017 World Press Freedom Index, Reporters Without Borders ranks Palestine as 135th out of 180. In 2016, it had been 132nd. Meanwhile, US-based Freedom House listed the West Bank as “not free” in its annual 2016 report.

The Palestinian government's blocking of websites and arrest of journalists is yet another indication of the Ramallah-based leadership's loss of control. Such acts reflect a leadership that is paying a high price for the internal struggles within the leading Fatah movement and between the Palestine Liberation Organization and Hamas. This toll affects the Abbas administration’s credibility and deteriorates its public support.