A Lebanese NGO has launched a virtual library to track the history of banned artistic works and products in Lebanon, shedding light on evolving limits of freedom of expression in the country. 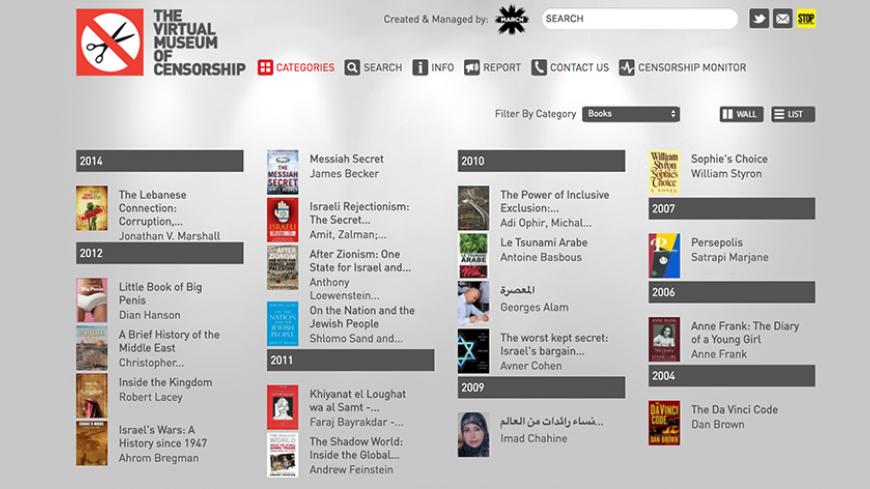 A screenshot of a page from the Virtual Museum of Censorship featuring banned books. - censorshiplebanon.org

What is censored more often in Lebanon: sex or politics? It depends on the timing, according to the Virtual Museum of Censorship, an online database tracking banned and censored material since Lebanese independence in 1943.

Having become familiar with some of the material, Gino Raidy, the vice president of MARCH, the nongovernmental organization (NGO) behind the museum, told Al-Monitor, “Different trends could … be observed according to the decades. In the 1940s, it mostly involved mentioning Israel.”

Raidy said, “In the 1950s-1960s, sexual explicitness was tolerated, but not political discussions. In the early 2000s, there was strong opposition to heavy metal. People would be arrested in the streets for wearing a heavy metal band T-shirt as many thought it was satanic. What stood to be censored became clearer after the Syrian army left in 2005, mostly focusing on sectarian and politics-related material. Nowadays, we note that LGBT art and events are getting targeted more and more.”

The virtual museum aims to identify not only what has been banned and censored, but also the reasons behind it, in an effort to present the big picture when it comes to limits on freedom of expression in Lebanon. The database launched on May 24, with an event at Phoenicia University, in Mazraat al-Daoudiyeh, in the south. An exhibition of panels and blackboards with words and names of individuals redacted to symbolize information omitted through censorship was followed by a discussion among free speech experts and activists. Participants included lawyer Hussein el-Achi, photojournalist Hussein Baydoun, author and activist Joumana Haddad, journalist and activist Luna Safwan and graffiti artist Omar Kabbani.

In 2013 in Beirut, MARCH had organized “Censorship in Lebanon, An Uncensored Look,” a panel discussion on freedom of expression. Looking ahead, the team hopes to organize others in Tripoli after the end of Ramadan and maybe in the Bekaa Valley.

“We believe that getting out of Beirut is important not only to inform people about censorship but also to have more discussions, address a different crowd living in rural areas and see what they think about the issue,” said Raidy, who is also a blogger. “Virtually, anyone can see what cultural material has been banned and censored, as well as what journalists and activists have been through when it comes to the expression of certain issues. We also invite people to submit entries if they hear about something new.

Control over every cultural product in Lebanon is based on a law or decree, as detailed in “Censorship in Lebanon: Law and Practice,” a 2010 study by Nizar Saghieh, Rana Saghieh and Nayla Geagea, who are lawyers and members of The Legal Agenda, an NGO that follows socio-legal developments in Lebanon and the broader Middle East.

“Censorship of films in Lebanon is based on four very vague principles: respect for public morals, respect for the reputation or status of state authorities, respect for the sensitivities of the public and avoiding sectarian or religious incitement, and resisting calls that are unfavorable to the interests of Lebanon,” Ghida Frangieh, a lawyer with The Legal Agenda, told Al-Monitor. “If the General Security, which is a security agency, wants to ban a film, it must refer it to an administrative committee, which reviews the film and gives its recommendation to the Ministry of Interior, which will make the final decision. The procedure is not transparent, and most of the time, the reason why a film is censored or banned is not given.”

To this, Raidy added, “From the data we collected, the two main organizations asking General Security for censorship are first the Catholic Information Center and then Dar al-Fatwa,” the leading Sunni religious institution in the country.

For example, in Nadine Labaki’s film “Where Do We Go Now” (2012), a scene with a priest and a sheikh speaking to the public through the local mosque’s loudspeaker was cut. More recently, a Druze cleric's apparition was masked by a black dot in Philippe Aractingi’s 2017 film “Listen /Ismaii.” Both decisions were supposedly based on concerns of sectarian incitement.

“The Boycott Bureau for Israel also made sure that the name of Steven Spielberg, who has donated money in Israel, would be removed from posters and films, although we can watch them. This was silly,” Raidy said. “They also asked that ‘Wonder Woman’ be banned because the lead actress is Israeli.”

Two filmmakers recently challenged censorship decisions before the State Council: Danielle Arbid, for her film “Beirut Hotel (2011),” and Reine Mitri, for the banning of her documentary “In This Land Lay Graves of Mine (2015),” about people displaced during the Lebanese civil war. Arbid lost her challenge, with the State Council deciding that censorship was justified because the film “attacked the reputation of the authorities” in regard to the investigation of Prime Minister Rafik Hariri’s assassination in 2005. The censors had disapproved of a scene that referenced a USB memory stick with documents on it about Hariri's death.

“The State Council even ruled that General Security can exercise prior censorship of film plots itself, which is a very broad interpretation of the law and an infringement on freedom of expression,” Frangieh said. “But it hasn’t yet ruled on Mitri’s film, and we hope that the ban will be overturned in the end. Giving a voice to the victims of displacement during the civil war cannot be viewed as inciting sectarian tensions. It is very important for a Lebanese artist to have access to her or his main audience in Lebanon.”

According to Raidy, the social impact of censorship in Lebanon is clear. “People aren’t allowed to speak about very important and unsolved things,” he said.

About the taboo on discussing the war and displaced people, he said, “This is reality. It is silly to forbid people to talk about it. Plus, the country is very proud of its freedom of speech, and maybe it is not as bad as in the other countries, but not as good as it could be.”

Raidy also warned against the dangers of self-censorship, stating, “Journalists just don’t investigate anymore for fear of getting in trouble. Even local film distributors don’t procure a film that could be a problem for the General Security.”

Indeed, many things must remain unsaid in a country that is proud of its liberty.