Istanbul's pride parade has been derailed yet again by police and ultranationalists, but LGBT Turks and their supporters still have much to celebrate. 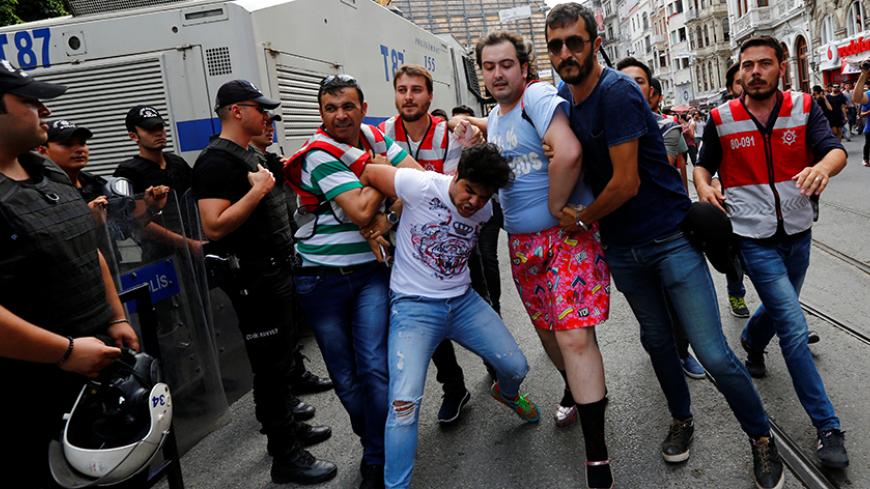 For the third time since 2015, Istanbul Pride met with resistance from police and ultranationalist activists. On June 25, riot squads fired rubber bullets at those who wished to participate in the parade celebrating lesbian, gay, bisexual and transgender (LGBT) people and prevented large crowds from gathering in Istanbul’s central Taksim Square. At least 44 people were detained. There was some positive news in all of this: There was no bloodshed and the detained were later released by police.

While LGBT people and their supporters have been marching all over the world in parades that emphasize the merits of diversity, respect and acceptance toward all people, pride parades in Turkey have become an easy target.

The ruling Justice and Development Party first blocked a pride parade two years ago amid tensions in the run-up to the elections on June 7, 2015. That summer witnessed the first of a series of Islamic State attacks against leftist and Kurdish activists. Much the same thing happened in 2016. It did not help that this year’s pride parade in Turkey’s largest city coincided with the first day of Eid al-Fitr, the holiday that marks the end of the month of Ramadan in the Islamic calendar, a time when religious feelings run high.

But “public security” concerns are only somewhat convincing. Even before Turkey’s national police department announced that it would not allow pride parades this year, an ultranationalist youth group threatened to attack pride participants. The same groups and others had uttered similar threats last year.

Perhaps the Turkish police feared a scuffle between the marchers and the ultranationalists. Even worse, in the ensuing chaos, suicide bombers could have snuck in to wreak havoc.

Much of the dispute stems from Turkey’s complicated relationship with LGBT people. Much sooner than most Western countries, the Ottoman Empire decriminalized homosexuality in 1858. Being transgender, however, remains taboo among most Turks to this day.

Still, for much of the second half of the 20th century, LGBT people led the country’s art and fashion worlds. For example, gay singer Zeki Muren, who sometimes played straight roles in movies, dressed in women’s clothing for his concerts. Muren’s fans, who cut across lines of class, religion and ethnicity, affectionately called him “Pasha,” a term used for high-ranking civilian and military officials in Ottoman times that remains in unofficial use for generals and admirals in the Turkish military.

Alongside Muren stood Bulent Ersoy, a man who underwent sex reassignment surgery in 1981 and become a woman who remained a highly popular singer well in the 2000s. For much of this period, Seyfi Dursunoglu, a gay man who played the iconic character “Huysuz Virjin” (“Grumpy Virjin”) in drag, freely cursed and insulted guests on stage and on live TV.

In many respects, these folks represent a bygone era in Turkey. Muren passed away more than 20 years ago. Ersoy appears in the media via humorous Kardashian-esque stories (her nickname remains “Diva”) and Dursunoglu is an octogenarian who sometimes gives interviews to reporters.

Meanwhile, until recently, gay men had to go through humiliating procedures to obtain exemption from military service, which is mandatory for all able-bodied Turkish men. Derogatory terms for LGBT people remain choice insults among Turks.

To be sure, not all is lost. A few weeks ago, actress and transgender rights activist Seyhan Arman (who herself is a transgender woman) gave a powerful account of her experiences and the state of LGBT rights in Turkey. She pointed to Turkish society’s hypocrisy in “calling Zeki Muren ‘my pasha’ and beating up [people like Arman] in the street.” At the same time, Barbaros Sansal, an outspoken fashion designer who was jailed for several months earlier this year for “insulting Turkishness,” continues his political activism not only for LGBT rights, but for the broader goal of improving democracy and the rule of law in Turkey.

Clearly, Turkey’s LGBT rights activists and their supporters are going to continue their fight for respect and acceptance from society at large, much like their peers in other Middle Eastern countries.