Israel, which prides itself on being the world’s biggest enemy of terrorism, accepted with equanimity the massive US arms deal with Saudi Arabia. 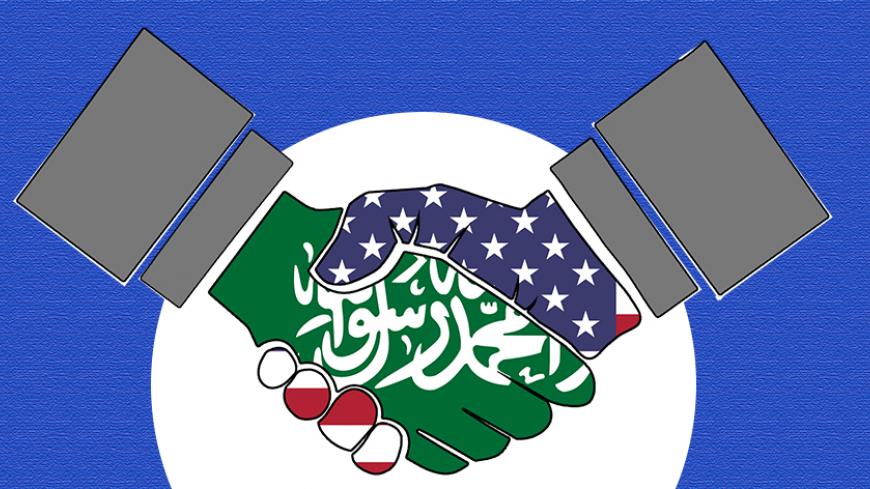 On May 20, US President Donald Trump signed a deal unprecedented in scope to sell Saudi Arabia $110 billion worth of arms and military equipment and an additional $350 billion over the coming decade. The mammoth agreement, inked by Trump with the Saudis, did not cast a pall over the royal reception accorded to the presidential family in Israel. It’s hard not to remember the Israeli reaction to the 1981 decision by President Ronald Reagan to sell the Saudis five Airborne Warning and Control Systems (AWACS). Back then, the government of Israeli Prime Minister Menachem Begin raised a stink, the pro-Israel lobby group American Israel Public Affairs Committee in Washington went into overdrive, and the media reported a severe crisis in Israel’s ties with the United States.

So why has Israel, the great enemy of terrorism, changed its attitude toward Riyadh? After all, Saudi Arabia has not stopped backing Islamist, anti-Israel terror groups. Former President Barack Obama declared that the Saudis were disseminating radical Wahhabi ideology. Former Secretary of State Hillary Clinton wrote that the Saudis were the main source of funding for al-Qaeda, the Taliban and other terror organizations. German Vice Chancellor Sigmar Gabriel demanded that the Saudis stop funding radical mosques.

There are several explanations for the resounding Israeli silence regarding the US arms deal with its Arab neighbor, formally considered an enemy state of Israel. First, Prime Minister Benjamin Netanyahu may have learned a lesson from the failure of the 1980s campaign against the AWACS. His right-wing government has no desire to run afoul of the quick-to-anger businessman-turned-president and to get in the way of such a lucrative deal. It could cost them a “real estate” deal — namely an American demand that Israel freeze West Bank settlement construction — which would threaten the future of Netanyahu’s coalition. One can easily imagine what a ruckus Netanyahu would have caused had Obama signed a similar weapons deal before coming to Jerusalem, then refused to visit the holy Jewish site of the Western Wall accompanied by the Jewish prime minister and delivered a speech (at the Israel Museum) that included lavish praise for the Saudi monarch, King Salman.

Second, the Saudi weapons purchase is expected to boost the global arms industry, in which Israel has a major stake. A former senior defense official told financial daily The Marker that the intensive American interest in the Saudi deal was expected to spawn tenders for arms sales to other countries. Israeli entrepreneur Tal Mashraky, owner of the communications equipment manufacturer Acceleradio, which conducts projects for the Israeli and US militaries, said Israeli subcontractors working with American industries stand to gain a hefty commission from the Saudi deal. He also predicted that as compensation, the Americans might lift limitations on the sale of Israeli weapons to China.

Herein lies a third explanation for Israel’s silence. Israel is hardly a light unto nations as far as the “purity of arms” deals go. Israeli-made military equipment and know-how obtained by various routes enable despicable regimes in conducting war crimes. In July 2015, Al-Monitor reported that Israeli-made weapons were being used by the South Sudanese army to kill civilians, set fire to villages, kidnap and sexually abuse women and girls, some of whom were burned alive in their homes.

According to a Jan. 19 petition submitted to the Israeli Supreme Court by the attorney Itai Mack and human rights activists, the military junta in Myanmar is a good customer of the Israeli arms industry. Mack and the other petitioners claim they have proof of extensive ties between senior Israeli government and military officials, Israeli arms companies and the head of the junta in Myanmar. Reports by the United Nations and Harvard University researchers accuse the regime in Naypyidaw of committing crimes against humanity. Since last October, civilians have been murdered, disappeared and tortured, women and girls have been raped, and entire villages have gone up in flames. In September 2015, the heads of the junta came to Israel on a “shopping spree” at local defense industries, met with the president, the military chief of staff and heads of defense agencies and toured air force and naval bases. The head of the defense ministry’s arms exports branch visited Myanmar last summer.

Myanmar’s name graces the list of states planning to attend ISDEF, the defense, homeland security and cyber security expo opening in Tel Aviv on June 6. Other states accused of war crimes also appear on the list, including the Central African Republic, the Democratic Republic of Congo, Sri Lanka, Ivory Coast, Liberia, Nigeria and Cameroon. Some are under international arms embargos. The organizers announced that defense deals worth hundreds of millions of dollars are expected to be signed at the event.

In response to claims about invitations issued to representatives of dubious regimes, ISDEF said, “We regret that there are those seeking to undermine local industries and to libel the largest international arms fair in Israel that will open its doors to 4,000 office-holders from abroad. Representatives of some 90 official international delegations, headed by ministers and top officials, heads of military and defense agencies, will come to arrange defense and business cooperation with Israeli companies, to be exposed to the Israeli defense industry and to learn from it, as well as [being exposed] to the most advanced innovations in the fields of defense and security existing in the world market today. All the international delegations are coming with full coordination and in accordance with the law.”

As the old saying goes, people who live in glass houses shouldn’t throw stones. That also explains the restrained style adopted by Defense Minister Avigdor Liberman, the only senior Israeli official who dared speak out against the deal with the Saudis. The minister told Israel Army Radio, “I'm not comfortable with the weapons race and acquisitions in huge Saudi Arabia." If only he could adopt this same restrained tone toward all Arabs, especially toward his Palestinian neighbors.