Why is Israel turning a blind eye to South Sudan arms sales?

Meretz Knesset member Tamar Zandberg accuses Israel of facilitating the sales of weapons to countries at war with an army accused of perpetrating war crimes, such as South Sudan. 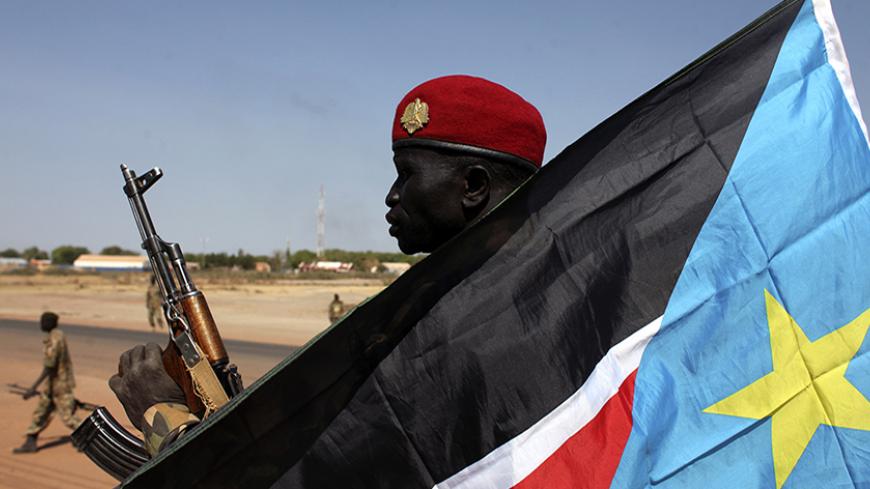 An SPLA soldier is pictured behind a South Sudan flag as he sits on the back of a pickup truck in Bentiu, Unity state, Jan. 12, 2014. - REUTERS/Andreea Campeanu

As expected, the resolution adopted by the United Nations Human Rights Council (UNHRC) on July 3, condemning Israel based on the report of the UN panel probing Operation Protective Edge in the Gaza Strip, provoked scanting criticism on Jerusalem's part. Prime Minister Benjamin Netanyahu was quick to condemn the condemners, stating that Israel not only assiduously upholds the equal rights of all its citizens, but also “acts in accordance with international law.” Once again claims were heard that the UNHRC picks on Israel, which adheres strictly to its “purity of arms” military ethical doctrine, while ignoring far worse crimes against humanity committed by other states.

Netanyahu ignored the fact that three days before the UNHRC’s decision, the Associated Press reported on a harsh UN report about war crimes being committed in South Sudan. Survivors of the attacks by the military there recounted that South Sudanese soldiers and their allies killed civilians, burned down and destroyed villages and forced some 100,000 people to flee their homes. Some reported kidnappings and sexual abuse of women and girls, a few of whom were burned alive in their homes.

In April 2014, the United States froze military aid to South Sudan, and President Barack Obama signed an executive order imposing sanctions and freezing assets of those involved in fighting and war crimes there. At the end of the year, the European Union decided to impose an arms embargo on the African state, which was founded in 2011. Meanwhile, in June, an official delegation from South Sudan attended ISDEF, the Israeli weapons expo, unencumbered.

In a letter to Defense Minister Moshe Ya’alon, Knesset member Tamar Zandberg of the Meretz Party described close ties between Israeli arms dealers and the regime in Juba. She said that Israelis involved in defense dealings were a common site in South Sudan. Referring to a detailed report prepared by attorney Itai Mack, who has for years been following Israeli weapons exports, Zandberg added that Israel trained Sudanese soldiers in South Sudan and in Israel, and that arms dealers, officials of the defense industries and Israeli trainers were spotted on flights to Juba.

“It is not only your duty to implement the authority provided by law, but also our obligation as a society,” Zandberg wrote. “A democratic state, which regards the protection of human rights as paramount, a UN member state that sends humanitarian aid to Third World countries, must set aside economic considerations and act to stop the bloody civil war.”

Zandberg told Al-Monitor this week that selling weapons to any of the sides involved in the internal South Sudan fighting makes Israel complicit in the war crimes being committed there. She said that people in Juba had told her that as long as weapons keep coming in, the government has no interest in reaching a compromise with the opposition. She was also told that in regard to the conflict between South Sudan and Sudan, Israel supports South Sudan because Sudan supports Iran. One can only hope that the weapons will not eventually end up in hostile hands, as happened with the many weapons that Israel supplied to the shah in Iran. Former Mossad head Danny Yatom, as quoted in Israeli daily Maariv, said, "When the Persian shah was in power, Israel sold him weapons. Later, we were reunited with these bombs when they reached Hezbollah hands and landed on our heads."

The report compiled by Mack notes that in February the Armament Research Services website published a photo of an Israeli Galil rifle, reportedly in the possession of the Sudanese People’s Liberation Army. The report further claimed that Israeli defense experts contacted officials regarding a tender for the training of police and military officers. The Sudanese newspaper Al-Intiba reported that Israeli firms had started transferring logistical and military equipment to South Sudanese forces. According to the report, transport aircraft landed at the airport in South Sudan every day at 3 a.m., unloading rockets, military equipment and African mercenaries.

The office of Israel's defense minister did not deny the facts mentioned in the report. A laconic response sent to Zandberg said that weapons export policy “is periodically reviewed by the Defense Ministry, in conjunction with the Foreign Ministry and additional parties.” One can learn about the quality of this periodic review and the participation of the Foreign Ministry from the 2012 State Comptroller’s report. The State Comptroller was “severely critical” of the violation of the law and regulations governing export controls and the coordination and consultation with the Foreign Ministry. Given the diplomatic sensitivity of defense exports, he added, Israel’s diplomatic interests may well have been compromised. Al-Monitor has learned from a highly reliable source (speaking on condition of anonymity) that the unclassified sections of the report pale in comparison to the classified ones, to which members of the Knesset’s oversight committee were privy.

The Defense Ministry said further in its response to Zandberg that “the ministry acts in accordance with the defense and diplomatic interests of the State of Israel, including considerations of human and civil rights in the export target country.” According to Defense Ministry data issued last May, a significant number of those “target countries” are to be found on the African continent. Israeli defense exports to Africa grew by 40% in 2014 compared to the previous year.

Mack told Al-Monitor that the Defense Ministry issues export and marketing permits for 130 countries and additional bodies. “Sadly, there aren’t 130 democratic states in the world,” he added. According to Mack, Israel operates contrary to the spirit of the sanctions imposed by the UN Security Council or the views of the international community. “The world has changed, defense export policy has been restricted and Israel continues to act as though this never happened,” Mack said. “Today, in many countries, we and perhaps the Chinese are the last ones still selling. Other states have long since retreated from selling arms to those committing crimes,” he added.

Recently, Mack handed Knesset members proposed legislation designed to curb defense exports to countries where the Foreign Ministry knows that human rights are being severely violated by local security forces. “Adoption and implementation of this bill could save Israel in the future from supporting criminal regimes shunned by the entire world, such as South Sudan,” he said. Although the proposal is based on similar US legislation, the Knesset is highly unlikely to kill the goose that lays explosive golden eggs.