The criminal investigation into Interior Minister Aryeh Deri's finances could send the Shas Party he heads into another battle over its leadership. 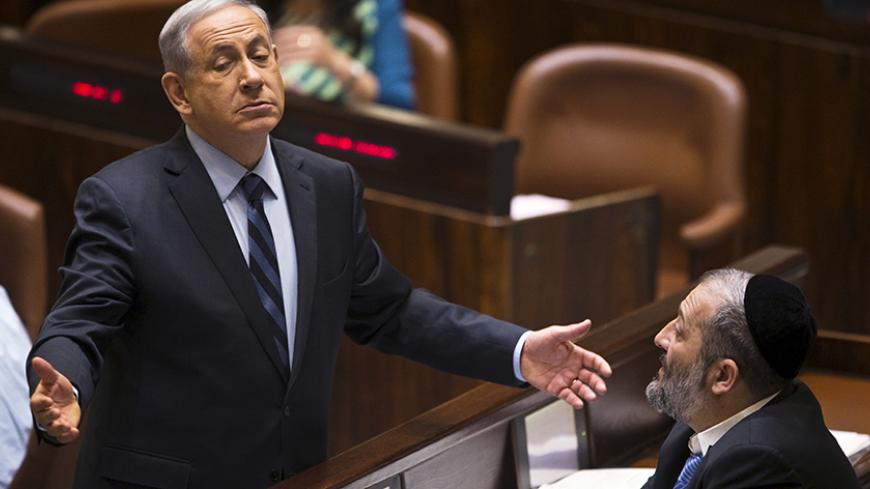 The interrogation under warning of Shas chairman and Interior Minister Aryeh Deri on charges of money laundering and tax evasion will have no impact on the government's stability, at least in the short term. On the other hand, it does mean that two of the most senior figures in the government are now suspected of criminal behavior. The other is Prime Minister Benjamin Netanyahu.

Because of their complexity, the investigations into Netanyahu and Deri are expected to last months, if not longer. It is quite conceivable that both will enter the next election cycle under a cloud of suspicion.

Deri and his wife, Yaffa, will be questioned again next week, after spending 11 hours in interrogation by the National Fraud Investigation Unit on May 29. They are suspected of taking money donated to a nongovernmental organization headed by Yaffa for personal use, such as the purchase of real estate. Police are looking into whether some of the checks given as donations were cashed by moneychangers.

As strange as it may seem, neither Netanyahu nor Deri are expected to suffer at the polls because of the investigations. They will both claim to be victims of a political witch hunt — Netanyahu for his right-wing positions, and Deri because he is Mizrahi (of Middle Eastern origin). In both cases, the status could actually increase their support among certain sectors of the population.

So far, the two politicians enjoy relative calm within their own parties. No one in the Likud has challenged Netanyahu's leadership, and the most recent poll results, released on May 27 by Channel 2, showed him leading the party for a fifth term as prime minister. All of Netanyahu's potential heirs, headed by former minister Gideon Sa'ar, have announced that they will only compete for his position as party leader after Netanyahu resigns, since they realize that he is undefeatable. If, however, the investigation leads to an indictment, the rules of the game will suddenly change.

Nor is Deri expected to be replaced in Shas. Since he resumed the leadership of the Mizrahi ultra-Orthodox party in 2013, he has eliminated all sources of opposition, along with what support was left for his predecessor, Eli Yishai. Nevertheless, there is something taking place beneath the surface in Shas that is challenging Deri's self-confidence. Despite public support from Shas' spiritual leader, Rabbi Shalom Cohen, his situation is far from simple.

Deri was the source of a major shakeup in Shas in the 1990s, when he was convicted of accepting a bribe and sentenced to three years in prison (of which he served two). He was deposed by the party's founder and spiritual leader, Rabbi Ovadia Yosef, and removed from the circle of decision-makers. His replacement, Eli Yishai, was a solid figure, completely loyal to the rabbi, and led Shas into a period of quiet and political stability. Nevertheless, shortly before Yosef's death in October 2013, Deri was able to convince the aging rabbi to hand the party back to him. He used all sorts of political trickery and gamesmanship to have Yishai deposed, for which Yishai has never forgiven him. While Yishai did form his own party, Yahad, it failed to pass the voter threshold in the 2015 election. Still, it won enough support to show that he has no plans to disappear. Yishai continues to be active in the public arena, particularly in the ultra-Orthodox sector, while maintaining ties with Shas members who suffered under Deri's autocratic rule.

While Deri is expected to continue receiving religious backing from the party's spiritual leadership, it is not at all certain that such support will be enough in the long run. While Yosef's status was uncontested, Cohen does not enjoy similar power and influence. At the same time, the popular assessment in Shas is that unlike the last time Deri was under investigation, claims that he is victim of a witch hunt will be less effective this time. In this context, Thursday's coverage of the investigation by Israel Hayom, the home newspaper of Benjamin Netanyahu, upset Deri and caused unrest in the party.

According to Israel Hayom, Shas is already negotiating with Yishai on having him replace Deri as head of the movement if the latter is forced to resign. The story caused a major commotion in Shas. People close to Deri held Netanyahu's inner circle responsible for the move. Netanyahu and his people were quick to respond that they had nothing to do with it, but Deri was far from placated. He is fully aware of the close personal relationship that Netanyahu and Yishai share, and which they insisted on maintaining even after Yishai was deposed.

Against this background, on June 1, the 30th anniversary of the death of Deri's mother, Cohen rose to his defense by launching a vociferous attack against the police. "I want to ask the investigators why they are not afraid of the investigations they face in Heaven every night. Poor people. They're nothing but poor people. They're crazy, and they're such poor people," said Cohen. His son Yaakov Cohen sent out a press release stating that his father supports Deri. It read, "He is the leader who stands before the breach and valiantly fights the battle of the Torah for the sake of all Israel."

Such backing will help the Shas leader keep his seat as head of the party. Nevertheless, he will still have to contend with internal unrest by the party's Knesset members, who feel like they have become little more than Deri's marionettes. The war over who will take over from Deri is already heating up.