While hailed by pro-Reform media outlets, the FATF’s decision to extend its temporary suspension of countermeasures on Iran has provided ammunition for hard-liners in Tehran. 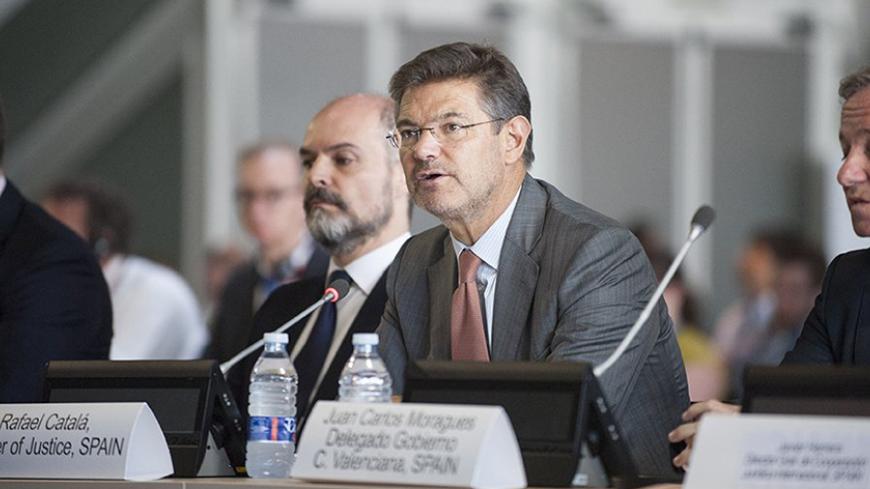 Spanish Minister of Justice Rafael Catala sits next to David Lewis, the executive secretary of the Financial Action Task Force, at the latest plenary meeting of the organization, Valencia, Spain. Posted June 26, 2017. - Twitter/FATFNews

TEHRAN, Iran — In its latest plenary meeting June 23, the Financial Action Task Force (FATF) extended a temporary suspension of countermeasures against Iran for another year. The FATF, however, stated on its website that it will keep monitoring progress in the implementation of its action plan in Iran’s banking system. While President Hassan Rouhani's administration had sought a permanent lifting of the group’s sanctions, pro-Reform media still hailed the decision as a positive signal to foreign investors observing Iran’s developments.

The intergovernmental body, comprised of 35 member jurisdictions and two regional organizations, avoided coupling Iran with North Korea on its so-called blacklist. But it could have helped Iranian moderates push back hard-liners at home had it met a stronger commitment to the spirit of the Joint Comprehensive Plan of Action (JCPOA), critics argue in Tehran.

A week after the anti-money laundering group’s meeting, the conservative newspaper Vatan-e Emrooz made fun of the Rouhani administration for supposedly having failed to keep six world powers committed to the 2015 nuclear deal. In an article republished by Fars News Agency on June 28, the newspaper referred to an official letter written by the Ministry of Finance and Economic Affairs to the FATF voicing criticism of the group’s latest decision on Iran. The letter had labeled the decision as “politically motivated,” the newspaper said.

The JCPOA, implemented in January 2016, had promised sanctions relief in a way that Iran’s banking system would immediately be reconnected to global financial institutions. The promise failed to materialize due to the remaining US unilateral sanctions on Iran. None of the world’s big banks has yet agreed to cooperate with Iranian banks for fear of punitive measures by the US Treasury Department. The latter has already weakened Rouhani’s standing within the Islamic Republic, as hard-liners have kept attacking the moderate president over what they described a “bad deal” with the West.

Vatan-e Emrooz quoted the Finance Ministry’s letter as saying the FATF had been under pressure from the United States, Israel and Argentina. But analysts say the United States actually supported the FATF’s draft decision despite strong opposition in Washington. It is true that the White House still bars American banks from doing business with Tehran, but it supported the June 23 decision in a move interpreted by observers as a signal to small European banks and companies to continue their business with Iran.

For the Iranian government, it is highly important to be permanently removed from the FATF’s "blacklist" — as the intergovernmental body represents most major financial centers across the globe. The group can play a role in helping to implement long-awaited banking reforms in Iran. It is an open secret that European big banks must return to Iran or Tehran will fail to attract the huge amounts of foreign investment its economy desperately needs. If Washington intends to continue to escalate pressure on Iran, Iranian moderates expect Europeans to help neutralize those pressures within the JCPOA framework. The FATF is one of the organizations that can press hawkish US officials.

But what if the FATF really made its latest decision based on “technical” facts, as claimed by Elizabeth Rosenberg, a former Treasury Department official? In that case, the Iranian government must try to be more pragmatic and cooperative if it wants to be removed from the FATF’s blacklist. The problem is that ultraconservatives fear that Iran’s adherence to FATF guidelines would unveil their financial documents to the “enemy” or would affect their funding of certain regional groups that are not favored by the West. Maybe the technical facts Rosenberg was referring to pertain to some of the Iranian hard-line groups, which the FATF wants to be held accountable for their financial transactions. The FATF seem to be trying to keep Iran on its Public Statement until it ensures the Iranian banking system poses no threat to the international financial system through money laundering or financing "terrorism." To that end, it will be unlikely to see the FATF standing against Washington’s rising pressure on Iran.

Given that the FATF already vowed on its website to “continue to engage with Iran and closely monitor its progress,” moderate Reformists and conservatives are better to hammer out a compromise to see the Iranian financial system rejoin the global system as soon as possible. The compromise, however, could mean a strategic change in Iran’s regional policies. Iran must stop funding regional political groups loyal to it, which the West has been sensitive about, or find alternative ways to help them — ways that would not jeopardize the global financial system as Westerners claim — or else this ongoing devastating game will not come to an end in the foreseeable future.

Tehran is inches away from rejoining the international financial system, as it has already managed to regain the trust of Europeans in 2015, resolving a 12-year nuclear dispute. Moderate politicians from both major political fronts should now put aside their differences for the sake of the long-term health of the economy, giving needed guarantees to the FATF. Both technical and political issues have impacts on the FATF’s decision-making process. So Tehran must give equal value to both of these aspects should it want to win the game against hawkish American foreign policy.