More than $1 billion in humanitarian aid has been pledged by international partners for Yemen, but whether it can be delivered is a separate issue. 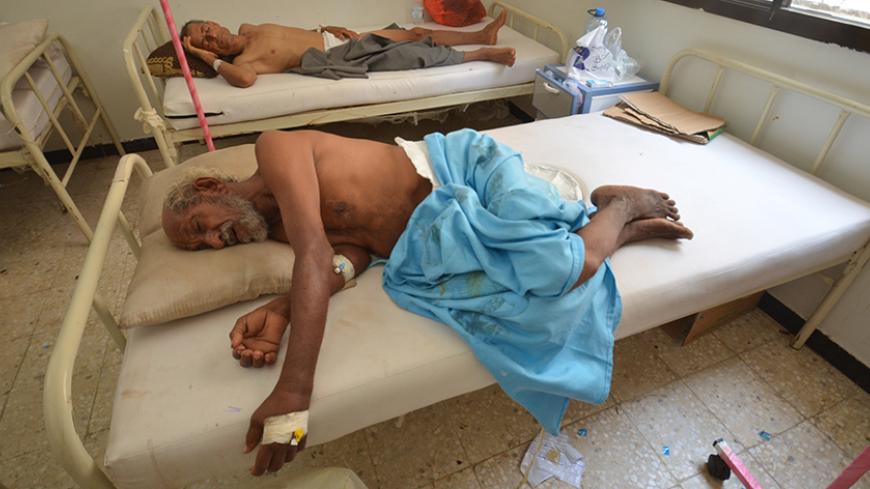 People infected with cholera lie on beds at a hospital in the Red Sea port city of Hodeidah, Yemen, May 14, 2017. - REUTERS/Abduljabbar Zeyad

In April, donors pledged more than $1 billion in aid to finance humanitarian efforts in Yemen. The United Nations, Sweden and Switzerland organized the High-Level Pledging Event for the Humanitarian Crisis in Yemen, which sought to raise funds to finance the response plan of the UN Office for the Coordination of Humanitarian Affairs.

The event, held April 25 in Geneva, took place after more than two years of civil war in Yemen — one of the poorest countries in the Middle East, if not the poorest — and a military intervention led by Saudi Arabia and the United Arab Emirates. According to UN estimates from April, some 19 million Yemenis need emergency support, and about 7 million of them are severely food insecure, a situation that qualifies as the world’s worst man-made famine at the moment.

The pledging event in Geneva coincided with the second wave of a cholera outbreak, the first outbreak having occurred in October. With more than 40,000 suspected cases in just four weeks, it is obvious that aid is needed now more than ever to help Yemenis survive the most brutal war in their modern history. It remains unclear whether the pledged aid will actually benefit Yemenis in need or whether it will fall into the wrong hands.

Given the extremely chaotic environment, expecting implementation of a fully transparent aid delivery process would be overly optimistic. The current political and military situations point to bleak prospects for aid deliverability in the war-torn nation.

The Saudi- and UAE-led coalition has for a while been demonstrating its desire to move the ongoing fight on the west coast toward the Houthi-held port city of Hodeidah, after having recaptured the port of Mocha, some 112 miles from Hodeidah, in February. Such a move move would have devastating consequences, because it would probably lead to completely or partially blocking access to the port at Hodeidah, which receives 70% of the country’s imports and up to 80% of its humanitarian assistance.

The port has been functioning for months at a very low capacity due to the coalition’s halt in issuing clearance certificates to some vessels or informing vessels stationed in coalition-held areas not to proceed to Hodeidah until the situation has been stabilized. In addition, the instability along Yemen’s Red Sea coastline has made commercial vessels reluctant to unload at Hodeidah.

The Hodeidah port remains one of the two largest ports in the country, the other being the port of Aden. Hodeidah serves about a third of Yemen’s population, who at the moment live in areas held by the Houthi rebels. Closing it will surely slow, if not extremely handicap any aid delivery process. The suggested alternatives to Hodeidah, such as the delivery of aid to the city of Marib or via Aden, come with great challenges, as they are not adequately equipped to replace the Hodeidah port.

The capacity of the port at Aden, which receives about 20% of all imports, simply cannot be expanded overnight by 500% to receive almost 100% of imports and humanitarian aid entering the country. The port of Mukalla operates at a low capacity, only handling small vessels. Marib, in the middle of the country, has a domestic military airport, but surely lacks the capacity to receive large shipments of aid.

Both the Aden and Marib alternatives will increase the cost of transporting food and medicines, since the Houthis have been imposing extra tariffs on goods crossing from areas held by the internationally recognized government, on top of taxes collected by the internationally recognized government, which puts additional burdens on the average citizen.

Another challenge to equitably delivering the pledged aid will be overcoming the political differences among the de facto powers controlling the country. The political and regional polarization could take its toll on the ease with which international and, most important, domestic nongovernmental organizations work in areas controlled by the different warring parties.

Less than a year after the formation of the supreme political council by the alliance of former President Ali Abdullah Saleh and the Houthis to govern areas held by their forces, regional polarization was reinforced May 11 with the formation of a UAE-supported southern transitional political council. Its founder and leader, Aidaroos al-Zubaidi, the recently fired governor of Aden, announced the council's mission to govern areas of south Yemen that were formerly the People's Democratic Republic of Yemen (PDRY). The action was widely seen as a secessionist move on behalf of the de facto, southern military leaders. The significance of such a development is immense in regard to the humanitarian situation.

The southern council — if it manages to control all the former PDRY territory — will have control over a number of seaports that will be essential to aid delivery, especially if the port of Hodeidah becomes inaccessible due to coalition operations against the Houthi-Saleh alliance. The position of the southern transitional political council regarding guaranteeing safe passage of aid to Houthi-held areas from seaports under its control, such as the ports of Aden and Mukalla, remain unknown.

As noted, the pledged aid is intended to finance OCHA's humanitarian response plan, which is carried out by international aid organizations and domestic groups working closely with them. The aid is clearly not intended to go through the internationally recognized government, which is facing allegations of corruption at the moment. The long history of corruption in Yemen and its low ranking in corruption indexes — such as being ranked 170 out of 176 in Transparency International’s Corruption Perceptions Index for 2016 — provides legitimate grounds for donors to limit transferring aid to nongovernmental organizations that are potentially vulnerable to government interference.

It is of great importance for all stakeholders in this conflict to show more ownership of the will to guarantee a more efficient and transparent aid delivery process. Otherwise no matter how high pledges are, donors risk having assistance failing to reach those in critical need.