Can US calm Turkish nerves over arming Syrian Kurds?

The United States seems aware of Turkish sensitivities, but the Americans can't guarantee the arms given to Syrian Kurdish forces won't ultimately fall into hands hostile to Turkey. 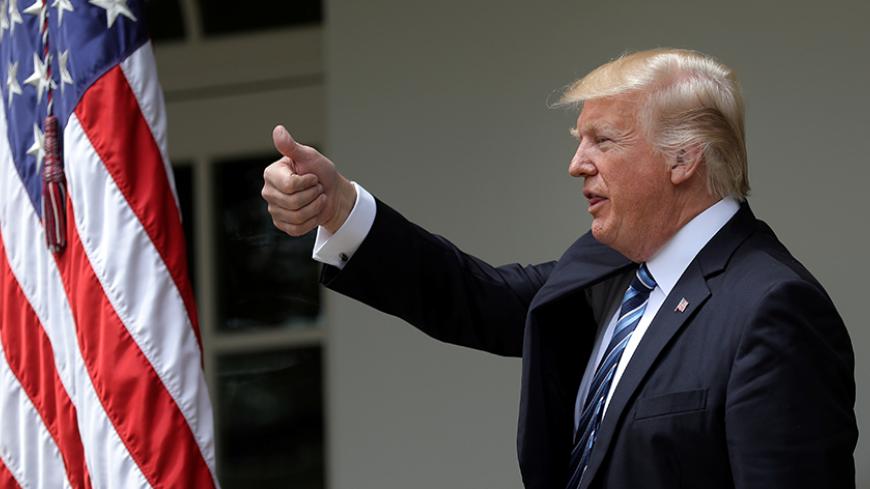 US President Donald Trump gives a thumbs up during a National Day of Prayer event at the Rose Garden of the White House in Washington DC, May 4, 2017. - REUTERS/Carlos Barria

After President Donald Trump announced May 8 that the United States will directly arm the Syrian Kurdish People’s Protection Units (YPG) and its allies in the Syrian Democratic Forces (SDF), Washington has been busy trying to calm Turkish nerves. Turkey is angry because it considers the YPG an extension of the Kurdistan Workers Party (PKK), which has been fighting Ankara for independence and autonomy since the 1980s.

The Turkish side has warned its US ally that there could be blowback from its decision to arm the YPG and SDF. Tellingly, while Turkey’s pro-government media outlets posted veiled threats in their May 11 headlines, hard-core secular opposition outlet Aydinlik called on the government to close Incirlik air base, a critical launch point for US-led air operations against the Islamic State in Syria, to NATO forces. Sozcu, another critic of the government, called for Turkish President Recep Tayyip Erdogan to cancel his upcoming visit to Washington.

The US side seems aware of Turkish sensitivities. In a meeting in London with Turkish Prime Minister Binali Yildirim May 11, US Secretary of Defense James Mattis said that the United States was committed to Turkey’s security. Mattis had also sounded confident on a May 10 visit to Lithuania, saying that the United States would “work out any of Turkey’s concerns” to arm the YPG.

But can the Americans really assuage Turkish concerns over Trump’s decision to directly arm Syrian Kurds?

Bleda Kurtdarcan, a global security analyst and lecturer at Istanbul’s Galatasaray University Faculty of Law, is not so sure. Kurtdarcan told Al-Monitor, “We saw a similar problem in Iraq. During the US occupation in the 2000s, US private security contractors were all supposed to have their weapons registered. However, some weapons ended up in the wrong hands. There was even a case where some employees of the private security firm Blackwater had sold weapons to the PKK.”

Kurtdarcan added, “If the US could not control the end user of its own military’s weapons and those of its military contractors when Iraq was under US occupation, how could we expect that it could control the end user in such a dynamic battlefield environment as Syria?”

Kurtdarcan continued, “I appreciate that Mattis has expressed goodwill toward Turkey. … But the US has only a few hundred special forces operatives on the ground who will not be able to check the weapons and ammunition on their Kurdish counterparts at all times. Some heavy weapons, such as [armored personnel carriers] and jeep-mounted launchers could be accounted for … but grenades, rifles, [rocket-propelled grenades] cannot.”

Perhaps the positive aspect of this episode for US-Turkish relations is that the list of arms that the United States will turn over to the YPG does not include anti-aircraft weapons. Kurtdarcan said that because Turkey prefers to conduct airstrikes against the YPG and the PKK in Syria and Iraq, the US-made weapons in the YPG’s arsenal would not be of use against Turkey.

The game changer would be a possible Turkish incursion into Syria or Iraq. As Al-Monitor’s Metin Gurcan pointed out in April, after the end of Operation Euphrates Shield in northern Syria, Ankara is weighing its options to conduct similar cross-border operations in the future — especially because there is public support for “rooting out terrorists.”

But in that case, Kurtdarcan said it would impossible for the United States to prevent the YPG and SDF from using their US-made weapons against the Turks. “Imagine there’s a repeat of the April 25 Turkish airstrikes [against the YPG and the PKK]. Can the US stop Syrian Kurds from using its weapons against Turkey, especially if there is a Turkish ground operation as well? If Turkey were to conduct a ground operation into northern Syria and northern Iraq, the Americans wouldn’t be able to prevent the usage of its weapons against the Turks.”

That is a nightmare scenario. On May 3, in response to questions about the April 25 airstrikes, one of Erdogan’s senior advisers, Ilnur Cevik, went on record and said that if YPG units and US military advisers “go too far, our forces would not care if American armor is there, whether armored carriers are there. … By accident, a few rockets can hit [the YPG and US forces].”

In the days ahead, US-Turkish relations will be all about calming nerves.